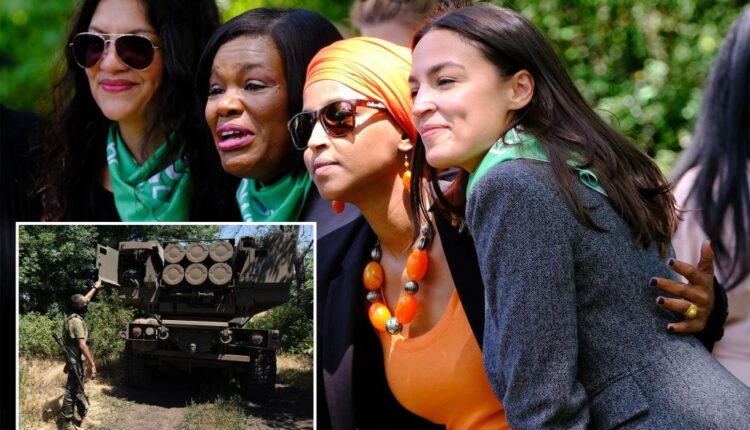 There’s bad news and good news about the open letter by 30 members of the Congressional Progressive Caucus that urged the Biden administration to pursue a “pro-active diplomatic push” in Ukraine and was promptly withdrawn after a barrage of criticism from across the political spectrum.

First, the bad news. While shrouded in verbal displays of support for the Ukrainian government and people, there is little daylight between the letter and the expressions of indifference to Ukraine’s fate coming earlier from the likes of J.D. Vance, Ohio’s Republican Senate candidate. The far left and the far right believe, wrongly, that the United States and its hard power is a force for ill in the world and that our government should focus instead at problems at home.

In a characteristically conceited way, the short-lived letter from the progressives presumes to know that is “in the interest of Ukraine . . . to avoid a prolonged conflict.” The Squad would benefit from talking to actual Ukrainians first. Sure, a short war is preferable to a long one. Yet what matters far more is whether Ukrainians liberate their country and stop the enslavement of thousands of their fellow citizens in occupied territories. We are fighting to the end, with or without you, is the refrain that any Westerner hears from Ukrainians of all social backgrounds and political beliefs.

More important, their call for the administration to “seriously explore all possible avenues, including direct engagement with Russia,” the signatories — who included Reps. Ilhan Omar and Alexandria Ocasio-Cortez — put on display their complete lack of understanding of Ukraine’s situation. The reason this is not the time for some chimerical “negotiated settlement and ceasefire” has nothing to do with anyone’s lack of effort but rather with the fact that the existing differences of opinion between Russia and Ukraine cannot be resolved at the negotiating table but only on the battlefield.

Specifically, the Kremlin continues to believe it can successfully destroy Ukrainian statehood or, at the very least, absorb a sufficiently large part of Ukraine’s territory and population into Russia. Ukrainian leadership, in contrast, is convinced it can repel the Russian invasion altogether.

There is no “diplomatic solution” for this divergence of views until it becomes clear who has been correct in their assessment. There are strong reasons to believe that the Ukrainians are right, particularly if the West’s support continues or is increased. Ultimately, however, that will be decided in the mud of Donbas and Zaporizhzhia. Only then comes the time for negotiations.

If the Progressive Caucus were serious about bringing the war to a speedy end, it would be calling for a steep increase of our military assistance to Ukraine — not for pointless, ill-timed diplomacy. As examples of numerous successes scored by HIMARS, CAESARs and other high-precision and long-range artillery show, Russian forces are no match to 21st-century, NATO-grade equipment in the hands of a motivated, competent fighting force.

Is there any good news? As the letter’s retraction itself shows, isolationism is not just bad policy — it is also bad politics. At a time of unprecedented polarization, three quarters of Americans agree that the United States should continue to support Ukraine, according to a recent Reuters/Ipsos poll. That might be as close to a consensus as Americans are likely to get, on any policy issue.

Democrats’ Sister Souljah moment on Ukraine, if one wants to call it that, is a sign of panic. For years, party leadership has indulged the party’s irresponsible, know-nothing wing for years. In return, this week’s letter, pandering to an unhinged activist base, has just made it harder for mainstream Democrats to claim credit for one of the few things that the administration and Congress have got largely right.

This is not a moment of Schadenfreude or complacency among Republicans, either. Rather, it should be an opportunity for House Leader Kevin McCarthy and others in position of influence to break with the equivocation and clean up in their own ranks. The GOP must signal it is united and serious about Ukraine’s victory — which remains central to our national-security interest.

Siding with Russian President Vladimir Putin or caving to a reckless isolationist animus, in contrast, is bound to have unpleasant and fully deserved electoral consequences on Nov. 8.

Dalibor Rohac is a senior fellow at the American Enterprise Institute. Twitter: @DaliborRohac.