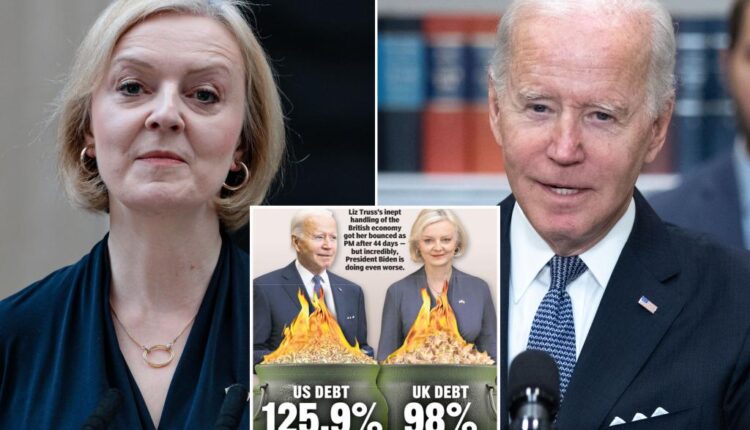 The bond market just carried out a hit on Liz Truss, so watch out, Sleepy Joe, you could be next.

The implosion of the UK prime minister is certainly one for the ages. She came in with a burst of optimism that she would reverse the country’s economic malaise with Thatcherite tax cuts.

It’s a lesson of how markets ­impose their own discipline on undisciplined political leaders, like Truss or, possibly someday soon, the dude we have in the White House.

Yes, real power lies with bond investors. They control things by setting interest rates on various government bonds that all other lending rates are pegged to and the economy responds to. If they think the value of their holdings will be eroded by inflation or deficits, they revolt by selling. Interest rates rise and the economic fallout could be devastating.

Recall then-President Bill Clinton’s famous surprise  during the first year of his presidency about how debt investors — or as he put it, “a bunch of f–king bond traders” — had a veto over his spending plans. After Clinton’s economic team convinced him the traders did, he used revenues from a tax increase mainly for deficit reduction, and the economy eventually recovered.

I give Truss some credit for at least considering the bond-market reaction to her tax and fiscal plan, even if it was a feeble one.  Last month, just after she officially took the job as prime minister, she appeared confident in looking to sell it to New York bond investors, sources tell me. The good times were about to roll, she assured one money manager I spoke to.

The markets will love cutting corporate taxes and more. The burst of supply-side stimuli will allow her to fight what ailed the UK economy — slow growth and massive 10% inflation, aka the stagflation she was handed by her predecessor, the recently ousted Boris Johnson, whose tax-and-spend policies contributed mightily to the country’s economic ­anguish.

“She sounded like she was about to take over the world,” the money manager added.

Fast forward a few days and Truss was quickly reversing course. Bond traders had enough of the unprecedented spending amid the pandemic and the recovery, coupled with super lower interest rates and money printing by the Bank of England. UK debt is now around 98% of the country’s gross domestic product of £2.4 trillion. You read that right: The amount of debt owed by UK taxpayers to investors is as large as the economy itself.

In other words, it wasn’t such a good time to cut taxes without also cutting spending. Traders began selling the Gilt, the UK version of the US Treasury bond. Yields spiked widely; UK pension funds loaded with debt tied to risky derivatives took massive losses, and a meltdown of the UK financial system was looming as the market imposed its own discipline selling gilts and sending interest rates soaring.

The Bank of England soon became worried about a “Lehman” moment. Overnight, the BOE went from a seller of debt to stamp out inflation it helped create to printing money once again. This epic monetary policy reversal was followed by Truss’ own epic volte-face.

Realizing that those damn bond traders hated her plan, she went from Thatcher back to the tax-hiking Boris Johnson.

No more tax cuts or cuts of any kind, she announced. In fact, tax increases are on the table. None of this helped her standing in the cruel world of British politics, which is far more capricious than our own, even if bond traders backed off.

Word spread Wednesday night she was out, I first reported. By Thursday, she announced her resignation after just 44 days in ­office.

Sleepy Joe Biden should be taking notes on Truss’s trussing. Inflation is raging here as in the UK. Biden has kept spending, and until recently the Fed kept printing money. US debt is a staggering 125.9% of our GDP, or more than $31 trillion, according to ­USdebtclock.org.

To fight the inflationary spiral created by Biden’s spending (and its own easy-money policy) the Fed (like the BOE initially) is raising interest rates. The bond market isn’t in meltdown but it is getting skittish.

Yields on 10-year Treasuries have risen significantly over the past year, showing that those pesky bond traders think inflation and recession-inducing deficits are coming sooner or later.

If inflation doesn’t peak and if the Fed keeps hiking, the bond market could sell off significantly, presenting one of those Lehman moments with mounting investor losses, and economic stagnation that the Brits just tried to avoid. Throw in massively higher US interest costs to service the enormous debt and you can see the pickle we’re in.

There are key differences between the UK system and our own, of course. Our economy is much stronger thanks to American innovation in tech, etc. There will be no push to oust Sleepy Joe midterm, though he could be running for reelection in the middle of a financial storm.

That means Biden should be very afraid. The bond market is starting to eye him as its next victim, and those “f–king bond traders” usually get their woman or man.