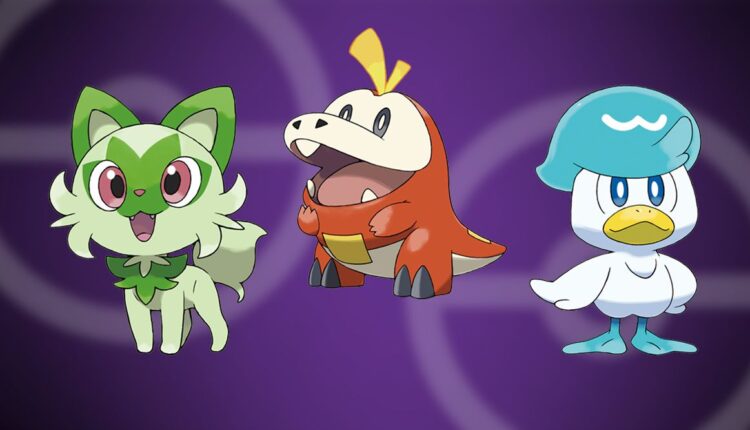 The first truly open-world Pokémon game, Pokémon Scarlet and Violet, is finally available on Nintendo Switch. Not only is this a new way to play a fan-favorite series, but there are also new Pokémon to discover including three adorable new starters to choose from. As usual, players get to pick from a Grass, Fire, or Water-Type when choosing between Sprigatito, Fuecoco, or Quaxly. But which one is best? Here are some things to consider when making your decision on which one to bring on your journey.

NOTE: This page has slight spoilers including the typing for each starter’s final evolution. However, we do not include pictures of the final forms.

This adorable cat is described on Nintendo’s Pokémon Scarlet and Violet page as a creature that loves its trainer’s attention and will get jealous if they pay attention to other Pokémon. A perk to choosing this Grass cat is that whenever its HP is low its Overgrow Ability increases the impact of its Grass moves. However, as a Grass-type Pokémon it also has the least strengths and most weaknesses against other types of the three options in battles. Since this is open-world you do have a little more choice of which gyms and Pokémon to battle first, but this gives you limited options for battles you’ll have strength in until you build up your team.

Its final evolution is a Grass / Dark-type, which puts it in a strange situation since is has just as many strengths as weaknesses. This combination makes it weak against Fire, Ice, Fighting, Poison, Flying, Fairy, and Bug. However, it’s strong against Water, Electric, Grass, Ground, Psychic, Ghost, and Dark. This is more weaknesses than any other starter’s final form in Scarlet and Violet, which means it could be a lot harder to fight through certain gyms or defeat certain opponents using Sprigatito’s evolution compared to Quaxly or Fuecoco’s final evolution.

In the end, Sprigatito is a good choice for anyone who wants a bit more of a challenge, since it is weak to more types than the others. But if you don’t want your playthrough to be difficult, Sprigatito isn’t the best choice. Of course, if you just love the way Sprigatito looks, then just go for it. After all, part of the fun with Pokémon games is using the team you like.

He may be a croc, but he’s no Water-Type. No, Fuecoco is definitely a Fire Pokémon! This food-obsessed little pepper is happy and laid back and has Blaze as its Ability, which allows it to power up its Fire moves when HP is low. Of the three Pokémon Scarlet and Violet starter options, Fuecoco has the highest number of types he’s strong against with only one more weakness than Quaxly and fewer weaknesses than Sprigatito.

Its final evolution is a Fire / Ghost-type, making it weak against Water, Ground, Rock, Ghost, and Dark-type, but strong against Fire, Grass, Ice, Poison, Bug, Steel, Fairy, Normal, and Fighting. That gives it a lot of power to work with and should make it easier to take on certain gyms and opponents compared to Sprigatito’s final evolution.

Overall, Fuecoco’s final evolution should make it relatively easy to fight through many gyms and oppontents. That’s not to say that some parts won’t be challenging, but the overall experience should be easier. If you’re looking for a more relaxed playthrough, then Fuecoco is a great choice.

Last but not least in the Pokémon Scarlet and Violet starter Pokémon round-up is the fabulous Quaxly. This tidy duck has a very chic and put-together essence to its personality. With its Torrent ability, Water moves are powered up when Quaxly has low HP. Although Quaxly doesn’t have as many strengths as Fuecoco, players will find that this duck has the least weaknesses of the three options.

Quaxly’s final evolution is a Water / Fighting-type, which only has five weaknesses and is strong against seven other types. Weaknesses include Electric, Grass, Flying, Psychic, and Fairy. But it is strong against Fire, Water, Ice, Bug, Rock, Dark, and Steel.

So, if you’re looking for a more balanced playthrough on Nintendo Switch where your starter can get a good mix of challenges while breezing past other opponents, Quaxly is a great choice.

One of the things that makes Scarlet and Violet one of the best Nintendo Switch games is all of the choices it gives you. Although picking the right starter from Pokémon Scarlet and Violet may be decided on by your play style, and maybe even the path you choose in this new open-world format, we know which one we choose. Admittedly the cuteness factor of Sprigatito is hard to beat. Quaxly’s low list of weaknesses makes him a solid choice in battle. However, our choice for the best starter Pokémon in Scarlet and Violet is the hot choice, Fuecoco.

The large list of types the little croc will be strong against makes the one extra weakness compared to Quaxly worth the con. A laid-back personality who loves a good meal is the kind of creature I want to go on a journey with. It’s also worth noting that he is a unique choice in Pokémon history as only the second reptile fire starter.

No matter who you choose to start your Pokémon Scarlet and Violet adventure with on your Nintendo Switch, there are plenty of new and familiar creatures in the latest game to build up your team with. We’re hopeful that this will end up being one of the best games to play on the Switch.

This better not be Apple’s holiday ad for 2022