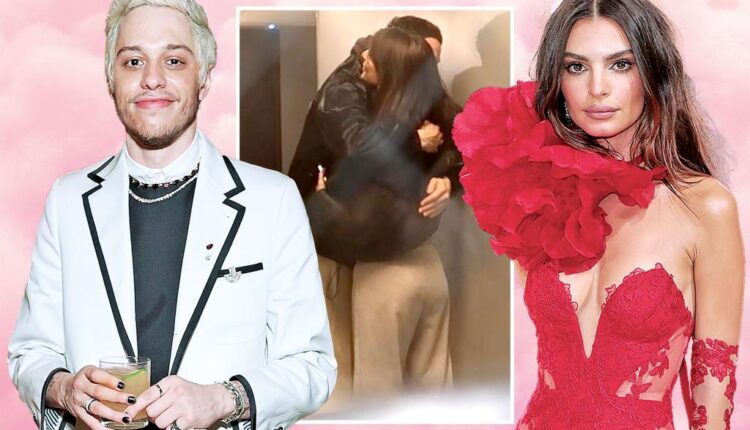 Growing up, the supermodel used to pray that God would make her “the most beautiful” woman. She’s not the first pre-teen girl to plead to the Almighty for that blessing, but in her case, it actually worked.

Of course, Ratajkowski is far from the first gorgeous, accomplished woman Davidson has dated. He recently broke up with Kim Kardashian. Before her, Davidson dated Kate Beckinsale, Margaret Qualley, Kaia Gerber, Phoebe Dynevor and Ariana Grande. Dionne Warwick now seems to be eyeing up her chances, announcing this week on Twitter that, “I will be dating Pete Davidson next.”

Many wonder how a guy who looks like Beetlejuice has become this generation’s Casanova.

Part of the answer might be due to the “Big D–k Energy” that Grande ascribed to her former lover in her song “Thank u, Next.” Recently, Jay Pharoah revealed on a podcast that when he asked his former “SNL” co-star about his endowment, Davidson replied, “Yeah, bro, it’s like 9 inches.”

But more of his appeal has to do with Davidson’s sense of humor about himself. Rather than swaggering about and reveling over Grande’s description of him, he’s filmed comedy bits on “SNL” poking fun at his heartthrob status and admitting he’s a “sex symbol for reasons no one can understand.”

As Pharoah noted, “You could have a big whatever… But you gotta be able to listen… Pete is just a sweet dude. He’s sweet. He’s vulnerable.”

In an age where men like Elon Musk can’t seem to handle anyone making fun of him on Twitter without banning them, and Kanye West and Donald Trump both stomp around proclaiming themselves to be geniuses, seeing a man who doesn’t take himself too seriously feels like a breath of fresh air.

While other men are obsessed with appearing to be tough “alphas,” Davidson is open about his vulnerabilities. He’s talked on air about going to rehab and getting sober in 2017.  He’s an advocate for mental health who has shared his own Borderline Personality Disorder diagnosis. He told his viewers on “SNL” in 2017 that, “Depression affects more than 16 million people in this country and there’s no cure per se, but for anyone dealing with it, there are treatments that can help,” and added jokingly, “and if you are in the cast of a late-night comedy show it might help if they, you know, do some more of your sketches.”

In response, one commenter on YouTube moaned, “Oh, look, another victim” — but taking charge of your mental health is far from being victimized by it. It’s easier to date someone who is working on their issues than to date someone who refuses to admit they have any. Especially if that person can laugh at those issues.

As one Twitter user noted, “Guys who are baffled by how Pete Davidson keeps landing babes despite being average looking like them are so close to getting that their personality is actually the problem.”

Kim Kardashian agrees, claiming on a recent episode of “The Kardashians” that the reason Davidson attracts hot women is because “he’s just the sweetest, most thoughtful person.”

More men might want to take a note from his book.

Jennifer Wright is a TV writer and author. Twitter: @JenAshleyWright

Let kids go to work instead of school