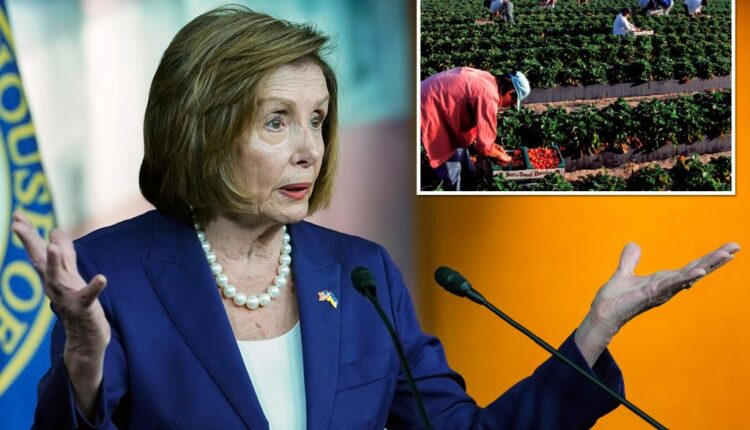 Speaker of the House Nancy Pelosi suggested last week that Florida needs illegal immigrants to pick crops — revealing much about the Biden administration’s incomprehensible inaction at the border.

“Right now, the best thing that we can do for our economy is to have comprehensive immigration reform,” she said. What does immigration reform have to do with the economy? Pelosi helpfully clarified: “We have a shortage of workers in our country,” which is why, Pelosi claims, farmers are asking, “Why are you shipping these immigrants up North? We need them to pick the crops down here.” We must secure the border, Pelosi said, but that doesn’t mean that we don’t recognize “our moral responsibility.”

Pelosi was excoriated for her comments. Many pointed out how shocking it was for the speaker of the House to be endorsing hiring illegal workers. Others pointed out the racism inherent in assuming Central American migrants will be fieldhands. Still others pointed out the strong “who will pick the cotton?” vibes.

For Pelosi, the open border isn’t a problem to be addressed so much as a solution to another problem: the labor shortage. Thanks to a slew of mass resignations, the labor market is currently extremely tight; many employers are struggling to fill their rosters. This has translated into the first wage gains for workers since the 1970s, though inflation is eating away at a lot of those gains.

The national minimum wage remains a laughable $7.25 an hour, but few Americans are still making that little. Almost 80% of American workers now earn at least $15 an hour, thanks to the pandemic labor market. That’s still not a living wage in any major metro area, but the tight labor market has had a huge impact on low wage and blue-collar laborers.

You know how you undo those gains? Import an entirely new working class from a failed socialist state made up of people who are willing to work for much less money than an American worker. Undercut working class Americans by opening the border and signaling to the working class of other countries that there is work for them here.

Don’t take it from me. Take it from Sen. Bernie Sanders, who as recently as 2015 was telling Ezra Klein that open borders was a Koch Brothers proposal to undercut American workers. That is exactly what Pelosi is suggesting we do: use immigration instead of raising wages for working-class Americans.

Pelosi’s argument is that this will improve the economy, and she’s right: GDP goes up with mass immigration. There are huge profits to be made when your workers aren’t citizens and can’t demand a living wage or safe working conditions. The rich get richer while the working class is once again hung out to dry — and Pelosi has the audacity to call this our “moral responsibility.”

The party that oversaw NAFTA is now lecturing the very people whose jobs they outsourced, telling them that it’s their moral responsibility to endorse importing an entirely new class of people to take their jobs here at home. It’s galling. Where is our moral responsibility to our fellow Americans? Scratch beneath the surface of most progressive claims to “moral responsibility” and you’ll find a class divide that the elites are benefiting from — very literally — and demanding the working class pay for.

But at least they are now admitting that these aren’t asylum seekers but economic migrants whom the rich intend to exploit. The Democrats’ reversal on immigration reveals everything about who they view as their base. It was once the working class, which is why they sought to limit immigration. Today it’s liberal, highly educated elites, which is why they seek to expand it under the guise of “moral responsibility.”

What I hope is clear by now is this: How you see immigration is much more about your economic status than it is about your moral virtue. Tarring people as racist or immoral for not wanting their jobs to be taken by people who crossed the border illegally is truly despicable, the furthest thing from moral you can imagine. It’s to demand that people endorse their own economic abandonment, while you welcome the needy of other countries.

It’s time to call this out for what it is: moral preening at the expense of your less fortunate neighbors.