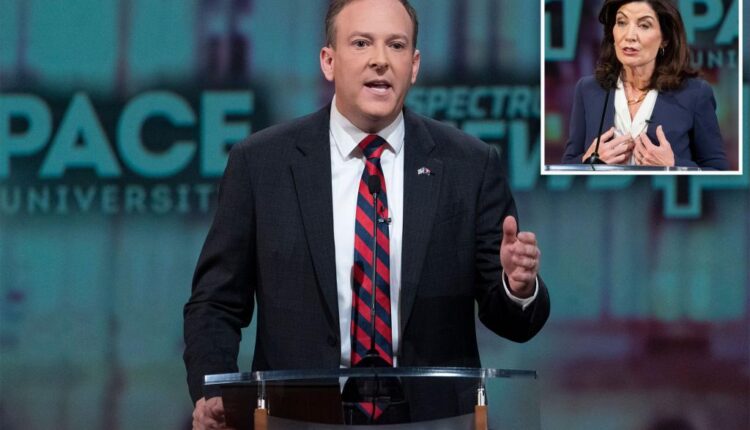 “I don’t know why that’s so important to you.”

With that quote, Kathy Hochul showed exactly why she doesn’t deserve to be elected to a full term as governor.

Republican Lee Zeldin had asked why Hochul hadn’t talked about locking up people who commit crimes, referencing the disastrous bail “reforms” that put repeat offenders back on the streets. She claimed people were being put in jail — a lie — then said that quote.

Just like her dismissing subway crime as a “sense of fear,” Hochul has no idea what’s at the forefront of New Yorkers’ minds right now: safety and the economy. Of course she doesn’t understand why that’s “important.”

Lee Zeldin was the obvious winner of this one-and-only gov-race debate.

Hochul basically stuck to the message that’s seen her lose her once-formidable lead: attacking on abortion and Jan. 6, neither of which has a darn to do with what actually worries New York voters.

And anytime she got stuck, she fell back on it’s complicated and the minutiae of legislation.

Zeldin, meanwhile, stuck to his guns, for example slamming Hochul’s “anti-democratic” charge on ousting Manhattan DA Alvin Bragg by noting that a New York governor has not just the power but the duty to fire district attorneys who refuse to do their job.

Time and again, Hochul fell back on process. Zeldin raised her pay-to-play scandals, and she actually said she did nothing wrong “under the laws that are set up.” Really, Kat?

She actually bragged, “I go to more ribbon cuttings and groundbreakings from The Bronx to Brooklyn to Rochester and Buffalo” in an answer on rising housing costs. Look at my photo ops and ignore your lying eyes!

Zeldin got stronger as the night went on, time and again erupting at her evasions on crime, the economy and the simple fact that New York is seeing more people move away than any other state.

In a year when most people see the Empire State on the wrong track, she basically told them you’re wrong. He talked about what he’d do to set New York right. We’re pretty sure that’s what the voters wanted to hear.

Pages, Numbers, and Keynote updated with a ton of macOS Ventura features