Paper Mario: The Origami King — All 40 faceless Toad locations in the Temple of Shrooms 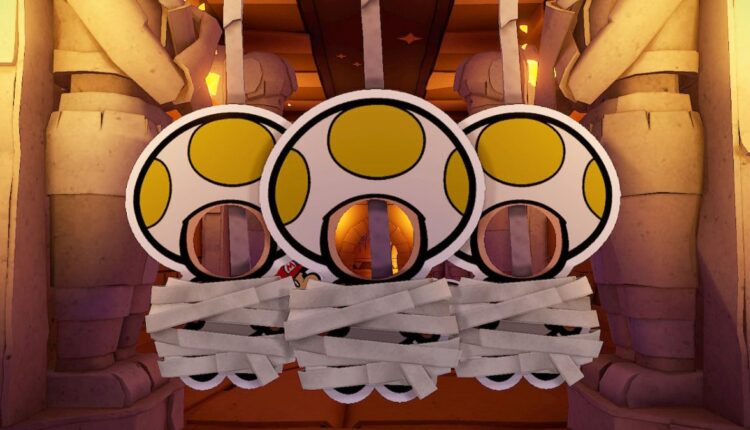 The Scorching Sandpaper Desert in Paper Mario: The Origami King a creepy and mysterious place, especially once you uncover the Temple of Shrooms and realize it’s filled with 40 Toads who’ve had their faces removed. You’re going to have to locate all of them if you want to take on the Temple’s boss. However, before you can find the Toads, you’ll need to uncover DJ Toad’s lost discs. Here’s the location for the four CDs and all 40 faceless Toads.

Temple of Shrooms: All CD locations

In Paper Mario: The Origami King, DJ Toad tells you that there are four CDs total in the Temple of Shrooms, but only the fourth one is needed to fight the boss. Here’s where they’re all located.

Now DJ Toad wants you to fill the Dance Floor with the Toads hidden throughout the temple. Obviously, these Toads can’t see on their own, so you’re gonna need to guide them with some music. Some of Paper Mario’s facelessToads are grouped together while others are roaming around on their own. It’s a fun event that stands out from those provided in other Mario games. Here’s where you’ll find them all.

And that’s where you’ll find all 40 faceless Toads hiding in the Temple of Doom Shrooms. Now it’s time to move on to the boss fight. If you need any help defeating this unholy enemy, we can help you out with our guide for how to defeat all 16 bosses in Paper Mario: The Origami King.

Should you get an iPad or a drawing tablet?