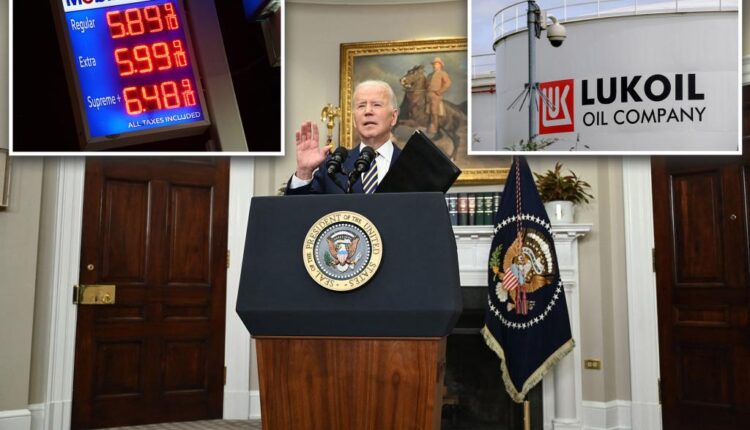 After Russia invaded Ukraine in late February, Western nations, including the United States and those in Europe, were quick to slap punitive sanctions on the country. The idea was to punish Russia for the invasion by collapsing its economy. President Biden told the public the goal was to “reduce the ruble to rubble.”

Eight months later, it is clear that this has not worked. The ruble is not “rubble” — in fact, it is stronger than it was before the war in February, having risen around 23% against the dollar. Why have the sanctions failed so badly?

Simply put: The war and the sanctions themselves have drastically increased energy costs. Since Russia’s main export is energy products, this means Russia is raking it in. In September 2021, Russia’s current account surplus — the amount of money Russia is earning from its trading partners — was around $75 billion. Today it is around $198 billion. The sanctions policies have created a bizarre situation in which the United States and its allies are paying more at the pump, and the Russians are sitting on a growing pile of cash.

Back in February, many assumed that if we stopped buying Russian energy products, there would be no one else to buy them and the country would go broke. With no money in the bank, the Kremlin would be unable to fund the war. But that has not happened. Instead, other countries, most notably China and India, have stepped up to the plate and are buying Russian oil and gas. You can’t have an export ban without cooperation from most nations.

To add insult to injury, these countries are getting Russian oil and gas at a discount. While American consumers are paying a fortune at the pump, and Europe faces freezing this winter due to energy shortages, Russia’s allies are gorging on cheap Russian energy.

Obviously, this situation makes no sense. The sanctions are hurting us and benefiting Russia and its allies. Something needs to change. A new approach is needed. Since Russia clearly benefits from high energy prices, the key is to try to get these prices down. Two steps are needed to achieve this.

The first is counterintuitive: America and the Europeans should remove the oil sanctions. This will allow Russian oil to flow freely on the global markets and will drive down the price.

This doesn’t mean stopping using economic sanctions against Russia. We should continue to levy bank sanctions on oligarchs and use other levers to punish Russian President Vladimir Putin for his illegal invasion.

The second step is to increase energy production in the United States. America has some of the largest energy reserves in the world. It just needs to tap them. This will require an all-hands-on-deck approach to dig the stuff out of the ground. Instead of running down the strategic oil reserves, the Biden administration needs to unleash the energy sector and allow it to drill where it needs to drill.

The current approach to sanctioning Russia has failed. The ruble is stronger than it was before the war and Russia’s war chest is growing due to high energy prices. American consumers are suffering and the Europeans face a miserable winter. Let’s go all in and get those energy prices down — by any means necessary.

Philip Pilkington is a macroeconomist and investment professional.

How to watch season two of Acapulco on Apple TV Plus