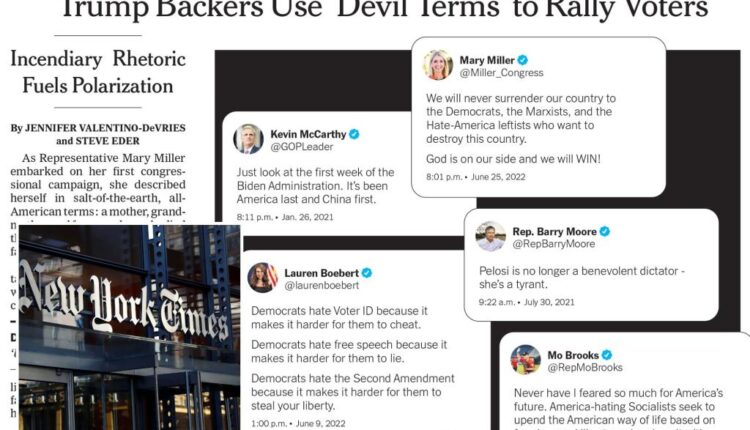 Just in time for Halloween and the congressional midterm elections, The New York Times wallops readers with a front-page story about GOP “devil terms.” Times reporters sifted through millions of documents to prove that Republicans “used divisive words and phrases more than twice as often as Democrats in tweets.”

The Times article, the latest in its “Democracy Challenged” series, revealed that devil words are “things that are so unquestionably bad that you can’t have a debate about them,” according to Texas A&M University professor Jennifer Mercieca.

Political rhetoric has certainly become more polarized, if not depraved, in recent years. But the Times piece is akin to a TV wrestling referee who ignores the wrench that his favored wrestler pulled from his trunks to whack his opponent on the head.

The Times did not include a specific list of “devil terms” in its report, but it apparently cast a very wide net — at least for Republican rhetoric.

Inflation has increased more than fivefold since President Joe Biden took office. Yet the term “Bidenflation” is offered as an example of extremist rhetoric. The Times labels the phrase “Biden border crisis” a “slogan of outrage and disdain.” It omitted any quotations from Martha Vineyard residents on that topic. Labeling Democrats “radical leftists” also rates as a sin.

Barely a month after Biden stunned the press corps by repeatedly asking “Where’s Jackie?” — awaiting the arrival of a dead congresswoman — at a White House summit, the Times touted as foul play a 2021 tweet from Rep. Pat Fallon (R-Texas): “Joe Biden needs to take a cognitive test. Now.” When did any president’s mental acuity become sacrosanct?

Maybe the Times was hell-bent on using that front-page headline (“Trump Backers Use ‘Devil Terms’ to Rally Voters”), but the piece is thinner than Joe Biden’s latest hair transplant. Was it necessary to have a journalism degree to recognize that Republican members of Congress are far more likely to link to Fox News stories? Did the Times need a team of computer analysts to realize that “legislators of all stripes are more likely to use provocative language on social media and in Facebook ads” than in official speeches?

I can attest from personal experience that reading too many congressional speeches can result in at least temporary brain damage. But regardless of the torments the Times’ team suffered from immersion into congressional emissions, it is regrettable its story omitted one website that would have wonderfully elucidated the broader issue — the White House Briefing Room.

Plenty of Republican candidates and members of Congress have said things that make average Americans cringe. But since January 2021, the most influential offender in the land has resided at 1600 Pennsylvania Avenue.

How can the Times revile GOP rhetoric after Biden denounced Republicans in August for “semi-fascism”? In his “Red September” speech in Philadelphia, Biden portrayed Republicans as a “‘clear and present danger” to democracy and endlessly denounced them for “extremism.” White House Press Secretary Karine Jean-Pierre revealed that anyone who is “not with where a majority of Americans are” is guilty of extremism. Biden titled that Philly speech “The Continued Battle for the Soul of the Nation” — a title that’s a blank check for endless raving.

The Times article omitted one of the most jolting examples of overheated rhetoric: last month’s assertion by Rep. Tim Ryan (D-Ohio), also a Senate candidate, “We have to kill and confront that [“extremist” Republican] movement.” But since the media want the Democrats to retain control of the Senate, Ryan’s outburst vanished into the memory hole. Nor did the Times mention perhaps the most depraved congressional tweet of the last half decade: Rep. Eric Swalwell’s (D-Calif.) 2018 threat to use nuclear weapons to enforce a ban on Americans possessing assault weapons.

American political rhetoric has become overheated in part because treason has become one of the most common accusations that politicians throw against each other. Democrats continue seeking to exploit the clash at the Capitol in January 2021 to vilify any Republican who did not become as craven as Rep. Liz Cheney (R-Wyo.). It is naïve to expect Republicans to respond politely when many Democrats demand they be banished from Congress — if not the continental United States. And then there was Biden’s comparison of Sen. Ted Cruz (R-Texas) to Nazi propaganda chief Joseph Goebbels.

The “devil terms” exposé is another attempt by the media to assert a prerogative to police political language. But this claim is preposterous after pundits and the press have inflamed their readers with wild goose chases such as Russiagate. The greatest threat our democracy faces is not the “combative rhetoric” of political candidates but the dictatorial actions of elected politicians.