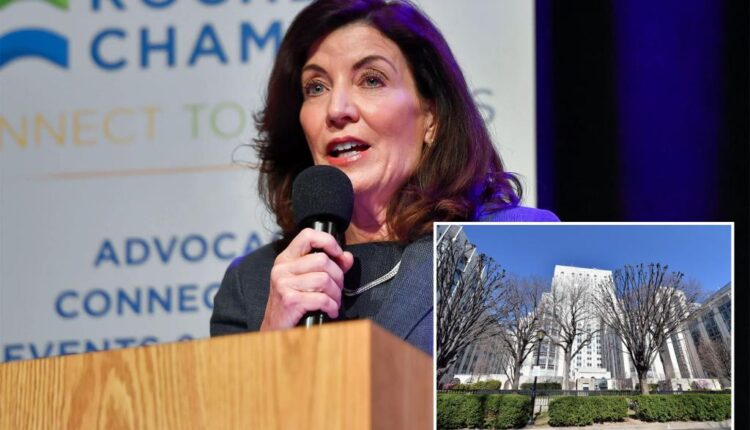 New York’s largest hospital sees growing demand for heart-transplant services in Manhattan, and regulators agree. The state Department of Health approved new facilities in June — but then tacked on conditions that have nothing to do with need in the borough. It’s yet another pay-to-play scheme under Gov. Kathy Hochul.

A just-unearthed July follow-up letter requires the hospital, NewYork-Presbyterian’s Weill Cornell Medical Center, to pay $50 million to subsidize health care in Brooklyn and Queens before spending $8.4 million on its own project in Manhattan. The surcharge adds sixfold to costs.

That’s just the beginning. Before breaking ground, NewYork-Presbyterian would have to partner with community-based service providers to address social, economic and health disparities in other ways. Regulators specifically name One Brooklyn Health as a beneficiary.

Taxpayers already contributed $664 million to the not-for-profit corporation in 2018, thanks to Gov. Andrew Cuomo. Hochul’s budget approved in April gave a bailout of $1.7 billion to a network of hospitals that include One Brooklyn Health. She met last month at the Upper East Side townhouse of its board chairman, Alexander Rovt, a donor to Hochul’s campaign.

Now the state is strong-arming private investors to kick in their own money to the enterprise.

Regulators call the pay-to-play scheme “health equity” in the letter, which the Empire Center for Public Policy obtained through a public-records request. Some people might celebrate the government strategy. After all, NewYork-Presbyterian has deep pockets, and Manhattan is stacked with millionaires. Why not take from the rich and give to the poor?

Government agencies often attempt to level uneven playing fields. Yet the effort to ensure fairness is doomed to fail in New York, no matter how good the intentions. One reason is the outdated tool that regulators are using — a “certificate of need.”

Essentially, a CON is a government permission slip. Before investors can build medical facilities, add beds or purchase major equipment in New York, they must prove to the state’s satisfaction that a need exists.

Hospital groups routinely pay tens of thousands of dollars to get this piece of paper. Clearing the hurdle is difficult everywhere but especially in New York. A report from our public-interest law firm, the Institute for Justice, shows that the Empire State has the nation’s most complex CON laws.

Advocates defend the scheme as necessary to reduce health-care oversupply and waste. Yet the US Department of Justice’s Antitrust Division studied CON programs nationwide and found no public benefit.

Decades of real-world experience cast additional doubt on the effectiveness of CON laws. California, Texas and 10 other states — covering 40% of the US population — have survived for years without CON laws. The result in these jurisdictions is more hospitals and surgery centers per capita, along with more hospital beds, dialysis clinics and hospices.

Other states quickly recognized CON laws as a liability at the COVID-19 pandemic’s start. The Institute for Justice report shows that 25 states, including New York, suspended their CON programs as the virus spread so hospitals could respond more quickly to the crisis.

Rather than abandon the failed CON experiment in the post-pandemic world, New York is doubling down. Instead of just proving need, now applicants must prove their commitment to equity before breaking ground. Yet the underlying CON problems remain.

The most obvious flaw is the built-in protectionism. Put simply, it’s not big corporations and millionaires who suffer when the government picks winners and losers. The rich and powerful never get left behind because they have access to the decision-makers.

Outsiders without a voice in the process are the vulnerable ones.

Big hospital groups can clear the CON hurdles. Our client Dipendra Tiwari, an immigrant who wanted to provide in-home health care to Nepali-speaking refugees in Kentucky, could not. Neither could Marc N’Da, another immigrant who wanted to provide medical-transportation services in Nebraska. Nationwide, aspiring small-business owners are the first victims of CON enforcement.

Patients are the ultimate losers. They pay more for less, as health care providers pass the regulatory costs onto them.

Health-care disparities are real, but CON laws are not the answer. Helping some — especially rich donors — at the expense of others is the opposite of equity.

Jaimie Cavanaugh is an attorney and Daryl James is a writer at the Institute for Justice in Arlington, Va.