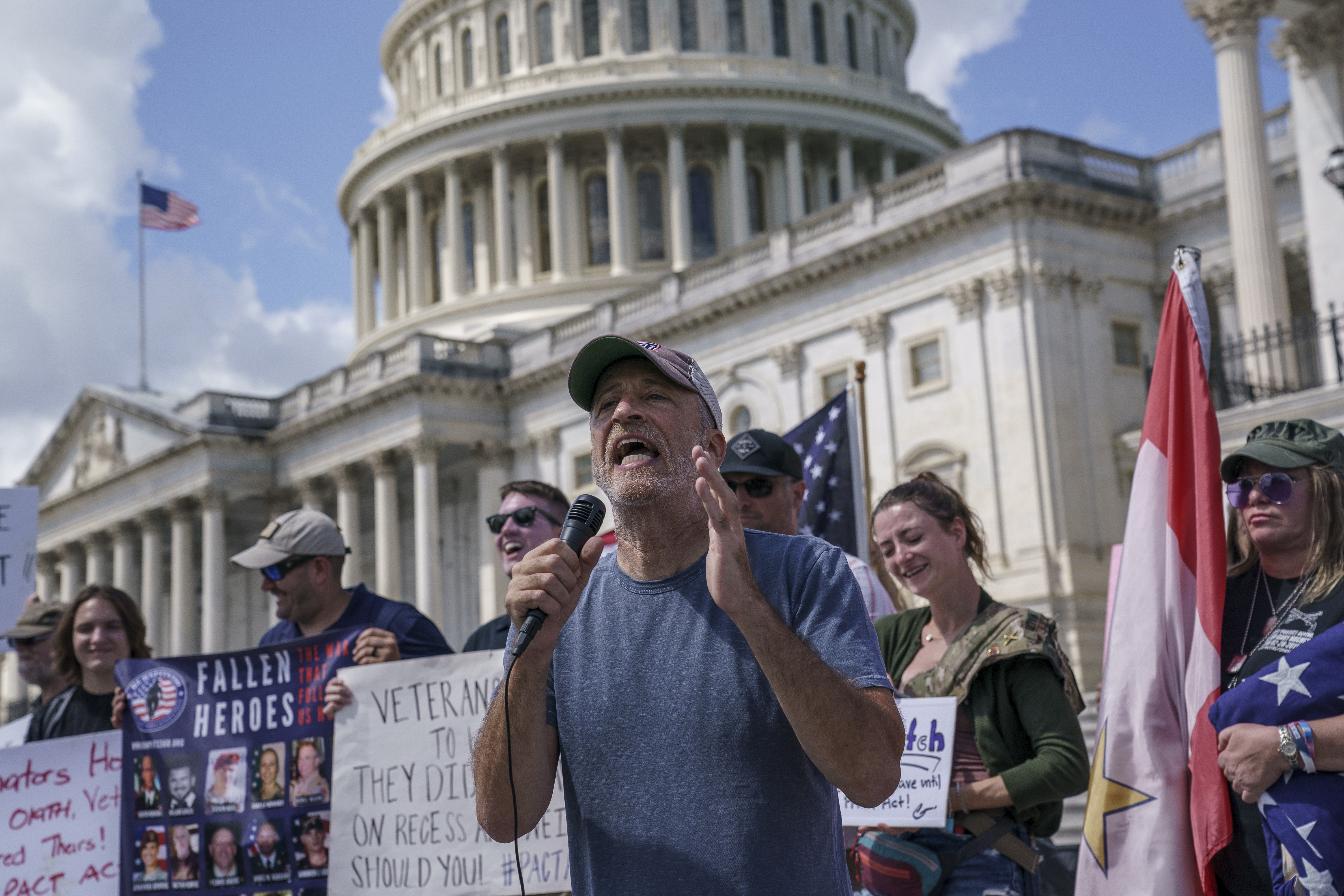 The Issue: Jon Stewart’s bashing of Senate Republicans over their issues with a veterans’ bill.

Jon Stewart is a true American hero (“Stewart rips GOP vet stand,” July 30). He has been standing up to politicians and championing sick and dying 9/11 responders and veterans for years.

Finally, after years of delay, both the House and Senate were passing legislation for veteran health care.

President Biden was set to sign it this week. Then Sen. Joe Manchin cut a deal with Sen. Chuck Schumer on another big spending bill. So Minority Leader Mitch McConnell threw a hissy fit and sabotaged the whole thing with a procedural vote that saw many GOP senators switching positions.

If Republicans are hurting American heroes, shouldn’t The Post be calling them out the same way it does when leftists are wrecking the country?

Stewart should not be criticizing the Republicans for voting against the PACT Act.

He should be criticizing the Democrats. It was Democrats, after all, who attempted to slip in a $400 billion spending spree totally unrelated to the veterans’ health-care legislation.

This is what Democrats do all the time. They always attach an addendum, which they could never get passed on its own merits, onto a bill that is very popular.

Please publish on the front page the names and pictures of every Republican senator who voted against the PACT Act.

A few weeks ago, all 30 who pulled their support backed the act. It was poised to pass with only 14 voting against. Nothing changed in that time period, except those 30 votes.

That means these 30 senators are responsible for the continued denial of benefits to our most deserving citizens.

Maybe if our civilians believed the government would take care of them without exception after they served, we would not be experiencing a shortage of new recruits.

What is never mentioned in celebrities’ rants is exactly why a particular bill, one that looked and sounded solid and appropriate on its face, was ultimately rejected.

More often than not it’s because some representative or senator tried to quietly weasel some highly questionable item into the bill that was never agreed to or even addressed.

The tragedy of it all is that our veterans continue to pay a steep price for these shenanigans, partisan schemes and one-upmanship. Shame.

The Issue: A Brooklyn bishop and his wife who were robbed of $1 million in jewelry during a church service.

After reading that this Brooklyn bishop did not stage his robbery, I was still left totally disgusted (“Bishop: I did not stage robbery,” July 30).

Jesus rode a donkey and gave his sermons from a mountaintop or whatever was available at the time. He had hordes of followers who truly believed in him.

Did he need to be flamboyant or have a penchant for expensive jewelry? He didn’t. He got his message across simply and without any fanfare — unlike Bishop Lamor Miller-Whitehead.

If you want to spread the “word,” then act accordingly. Do you even know what the word “humility” means?

It is difficult to feel bad that Bishop Miller-Whitehead got robbed.

Where does he get his money? It takes a lot of collection plates to purchase what this guy has.

Miller-Whitehead is no different from Joel Osteen. They are televangelists who talk lost souls out of their money, offering false hope.

Just when you think the NYC Council couldn’t go…