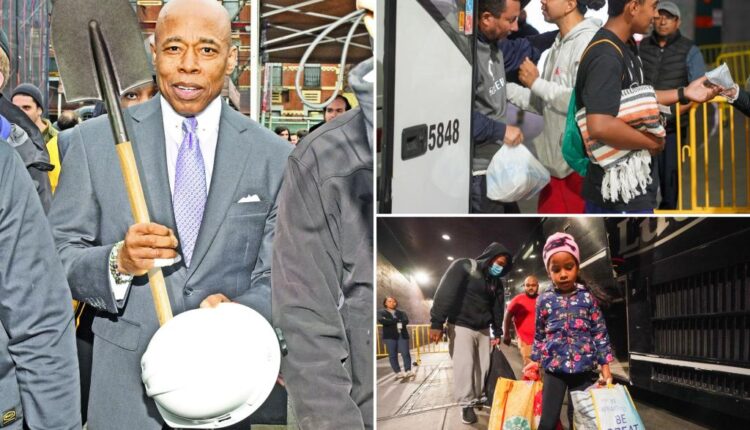 The First Rule of Holes says that, when you find yourself in one, immediately drop the shovel. The rule is apparently news to Eric Adams, who insists on digging New York ever deeper into the hole known as the migrant crisis.

His noble gesture of opening the city to an unlimited number of border crossers is rapidly becoming a disaster. Adams’ Friday declaration of a state of emergency came with a new prediction that the cost of his Welcome Wagons would hit $1 billion and that the population in homeless shelters could reach 100,000 people.

Earlier, he asked Washington for $500 million to cover the cost of what he estimated would be 75,000 new arrivals. Thus, in a matter of days, the cost estimate doubled as buses continued to drop off migrant passengers, with 17,000 now in the five boroughs. Public schools have enrolled 5,500 migrant children.

That’s obvious, but what is also obvious is that Adams refuses to acknowledge the whole truth. To wit, no amount of money will be enough as long as the southern border remains open to virtually all comers.

For him to say that would be to condemn the policies of President Biden, a fellow Dem, and, this being election season, that is a bridge too far for Adams.

Being mayor of New York has been called the nation’s second toughest job. But it’s an impossible job if you make unforced errors like this one and refuse to correct them.

Indeed, in exchange for his party loyalty and silence, the mayor has gotten exactly bupkis from the White House.

Nor has Gov. Hochul offered to help, other than to support the city’s push for federal aid. Imagine that.

To judge by her fat campaign account, Hochul has no trouble asking for money when she’s asking for herself. But when they face a crisis, the 8.8 million people who live in the city are on their own.

It’s likely the White House refuses to help because of how fast the numbers are escalating and doesn’t want to get sucked into an unlimited commitment to New York that would trigger similar demands across the nation. Besides, any focus on the topic reminds voters of the president’s border disaster.

If only Adams had thought of those complications before welcoming the world.

Consider that his emergency declaration allows the city to move faster to provide shelter, food and health care, a menu of free services that will attract even more migrants.

With apologies to the “Field of Dreams,” if you build it, they will come.

With more than 4 million border crossers in the country thanks to Biden dropping all safeguards, and with thousands more coming every day, it’s certain that many, many more will find their way to America’s mecca.

Although GOP border state governors continue to bus hundreds of migrants north to sanctuary cities, even without that stream, New York likely would be the top migrant destination.

All the more reason why Adams should join the GOP governors — and most Americans — in demanding secure borders. Until then, his efforts will be swamped by more new arrivals.

He could simply pick up the phone and tell Biden to stop the influx. And then go public with the president’s response.

Meanwhile, if the City Council gets its way, Adams will be forced to spend even more to make the Welcome Wagons more welcoming.

Lawmakers want him to lease entire hotels for the migrants, with the council speaker calling those facilities “more humane indoor settings.”

The price for this radical largesse is beyond dollars and cents. Inevitably, the mayor’s time and energy, and that of most of city government, will be consumed by the crisis of caring for an enormous number of needy people. Everything else will take a back seat.

That will include combatting crime, the reason Adams got elected. A former cop, he alone among the Democratic field promised to make the city safe again.

Unfortunately, that feels like ancient history. Although murder and shootings, thankfully, are down more than 13%, overall serious crime continues to soar by nearly 33% over last year. Public disorder is rampant and many streets and subways have a menacing air.

During the campaign and early in his administration, Adams drew attention to the bloodshed by visiting crime scenes. He knew the media would report his presence, and hoped that would lead to a groundswell of support for changes in criminal justice laws that Albany foolishly gutted.

Yet Adams got next-to-no help. Lately, he has stopped raising the crime issues, wasting yet another chance to put the squeeze on Hochul when she desperately needs his political support.

To be fair, it would be understandable if Adams is discouraged at not getting any help from fellow Dems, but unforgivable if he has thrown in the towel.

Even if he has forgotten it, crime remains Public Enemy No. 1. What Adams does about that will determine whether his tenure succeeds or fails.

Is Hunter in DOJ sights, or are leaks just a feint?

The deluge of reports saying the Department of Justice is wrestling with the Hunter Biden case raises two possibilities.

Bet the ranch on No. 2. The fix was in the moment Joe Biden took the oath and every leak aims to soften the ground for the final punt.

Even an honest and brave Attorney General would have found it difficult to treat the son of the man who picked him as just another suspect. And Merrick Garland is neither honest nor brave.

He turned the Justice Department into the law enforcement division of the Democratic Party and is eager to prosecute its opponents. From his probes of Donald Trump and his associates, unhappy parents at school board meetings and pro-life demonstrators, Garland is a bitter partisan.

Some say he has been hands-off in the Hunter Biden case. Hogwash.

There’s no way Garland was going to trust anyone else to run the protection racket. There are numerous ways for him to signal to underlings that Hunter gets the friend and family discount, which is why a special counsel should have been appointed.

But Garland didn’t go that route because any honest probe of Hunter would inevitably lead to the president. Sitting on the son’s case is the only way to protect the Big Guy.

The Bidens know this, which is why Joe is emptying the federal treasury to buy votes. If Republicans take congress, a stalled agenda will be the least of his worries.