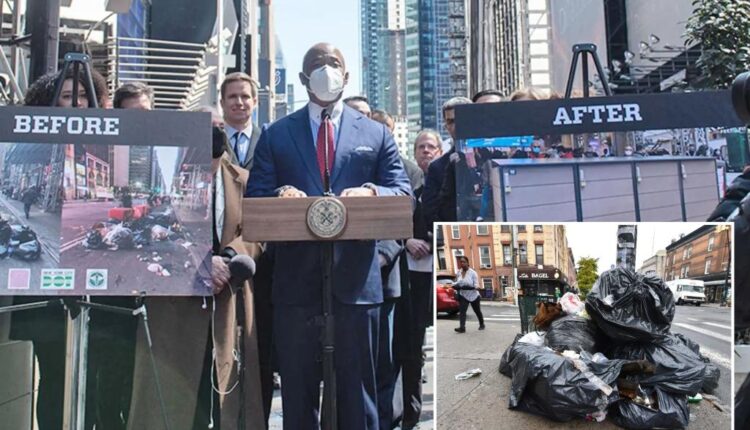 Kudos to Mayor Eric Adams for delivering on a major quality-of-life campaign vow: not letting rodent-feeding garbage linger on the streets so long.

Decades into New York City’s garbage wars, Sanitation Commissioner Jessica Tisch looks to have turned the tide in the battle with the rats. She has cut a deal with 32BJ SEIU, the key union for the building staff who have to put out trash for collection — which condemned Adams’ idea during last year’s campaign.

The plan will have most large residential buildings put their trash on the curb at 8 p.m. — not 4 p.m., as now. Buildings can also register for Sanitation routes that let them set it out in the early morning, 4 a.m. to 7 a.m.. In all, this should cut the time bags sit on the sidewalk from about 14 hours to just four.

Businesses like stores and eateries will be required to put their waste out at 8 p.m. or keep it in plastic bins (not just bags) on the curbside before closing. New trash bins will help make the garbage less rodent-attractive. A new midnight collection shift will make pickup quicker and less polluting, as it’s done when there’s less traffic. (New holiday collections are a plus, too.)

A lot remains to be done between now and finalized rules and the run-up to full implementation starting next April. (At least the weather’s turned colder, or we’d push for faster progress.)

Congrats to Team Adams for bringing Gotham in line with other major cities — and without having to spend more to do it. (This, when the last mayor gave us reduced service and filthier streets.)

This is a big quality-of-life win — well, except for the rats.

hit the brakes on Biden’s gas and energy nonsense