No, Biden, the discussion about climate change hasn’t ‘ended’ 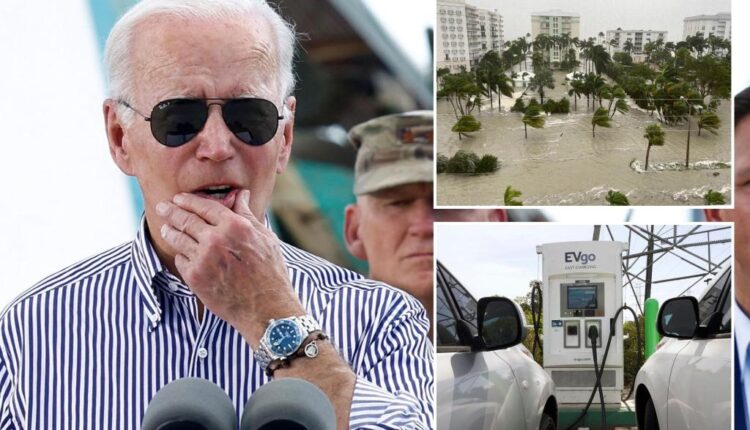 The President threw some serious political shade in Florida this week.

Standing in front of Governor DeSantis, President Biden was meant to be participating in a bipartisan show of support for those affected by Hurricane Ian. Only for the President to suddenly say, “The one thing this has finally ended is a discussion about whether or not there’s climate change, and we should do something about it.”

Governor DeSantis shifted slightly, aware that this one was meant for him. But he allowed the jibe to pass.

Yet jibe it certainly was. Ron DeSantis has in the past talked of those going on about the effect of climate change on America as “left-wing stuff.” And of course for the present era of Democrats take it as read that all Republicans are “deniers” as well as every other ugly name they can throw.

So Biden’s remarks were politically opportune. More of a problem is that they were also wrong. Visibly, demonstrably, factually wrong.

It has become an article of faith among the modern left that climate change is not only man made but responsible for any and all of what we used to call “natural disasters.” Today whether it is a fire or a flood, a drought or a hurricane, everything is said to be the result of man-made global warming.

Unfortunately for the people making this argument, the facts aren’t on their side. There aren’t an increasing number of hurricanes each year, or an increase in their ferocity. You can tell that not least from the fact that the media who claim otherwise must cherry pick their data. For instance the New York Times (surprise surprise) decided to pick the 1980s to compare with recent years. Why might that be? Because if you just go back a few years earlier you can see that hurricanes and deaths from hurricanes were higher than they are today. So we have to pretend that the 1970s and every decade before that never happened.

But as the writer and energy expert Alex Epstein pointed out this week, almost every other one of Biden’s presumptions is wrong too. He is wrong that there are an increasing number of hurricanes, wrong that global warming would even cause more hurricanes, wrong to claim that fossil fuels are responsible for more deaths and wrong in thinking that getting off fossil fuels is the fail-safe solution for stopping extreme weather events. Most of all Biden and those who think like him are wrong to pretend that fatalities are going up because of climate change. In fact deaths from extreme weather “have decreased 98% over the last century.”

And the problem about all of this is that it is not just a luxury opinion. The false belief that we are seeing an increase in catastrophic weather events and that this is the fault of fossil fuels leads to terrible policy decisions. It is the sort of thing that fuels the current administration to push zero-carbon targets and pretend that the energy transition is somehow ready and waiting for us.

Unfortunately for President Biden the continent of Europe is currently providing a fertile lesson in what happens if you follow that logic.

For decades the Green parties of Europe, among others, have pretended that the only reason Europeans still rely on fossil fuels is a combination of pig-headedness and corruption. But since the Russian invasion of Ukraine, and Putin’s cutting of supplies of gas supplies to Europe we can see what happens when this dream is acted upon. Even if it was desirable and possible to get off fossil fuels some day that day has not arrived yet.

The Green lobby is finding this out to their cost. People like the German Green party have campaigned against fossil fuels for years. Now they have had to agree to coal-fired power stations to remain open. They are currently tying themselves in knots trying to avoid the next step in their fast-learning process: the realization that the country’s nuclear power plants will have to continue working as well.

Why is this? If the energy transition was so easy surely Germany would be running on windmills and solar farms by now? Surely they could do without those fossil fuels that Putin gives them? But the reality is that they can’t. Their dreams and assertions have put their country at the mercy of Putin.

It’s the same logic is that has lead officials in California to tell the public to get into electric vehicles only to find out they don’t have enough electricity for them. How could that happen? Because of the same delusion. The delusion that the “climate emergency” is so serious that we should give ourselves a self-inflicted energy emergency.

To justify that you would have to believe that the skies really were falling in. And that is was our fault. You’d have to be believe that natural disasters didn´t happen until we made them happen. The people making that claim ought to be more aware of the facts. Because the consequences of their claims will lead to a truly avoidable catastrophe.

I haven’t seen the film “Bros.” Something I have in common with very nearly 100% of the rest of the American public. Unlike them I did watch the trailer and thought it a looked like a wincingly unfunny, cutesy, cliched big gay bore.

According to the creator of the film that makes me a “homophobic weirdo.” That’s what Billy Eichner said the American public were this week when we failed to turn out in our millions to watch his movie.

Although Universal hoped its “comedy” would make up to $10 million on its opening, the profits actually came in at a mere $4.8 million. Making “Bros” a massive floperoo.

I’m sorry Eichner has taken this badly, but he should realize one simple thing about his film. It’s not just straight people didn’t show up for it. Almost no gay people did either.

Biden hates Republicans so much, he would rather give oil money to Venezuela and Saudi Arabia than Texas