Nintendo Switch OLED vs. Switch Lite: Which should you buy? 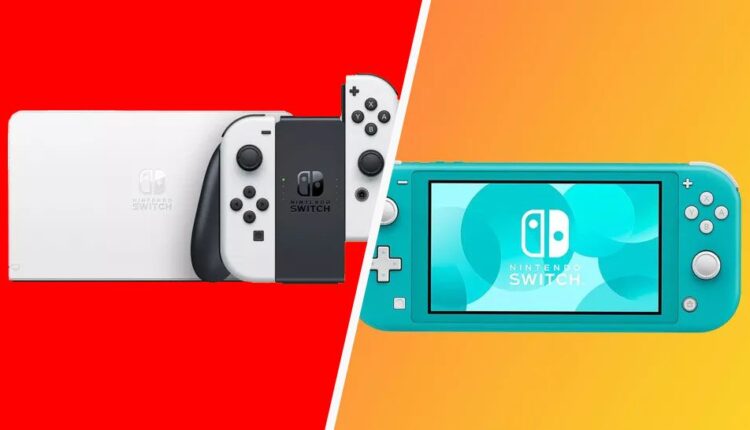 Nintendo Switch OLED is the latest Switch version. It has a larger screen, double the Lite’s internal memory, works with more games than the smaller Switch does, and has removable Joy-Con controllers for easy local multiplayer. That OLED display makes game visuals look a lot better too.

This handheld-only device cannot dock for TV play, but it is smaller, costs less, and is a great travel size. Just be warned that it doesn’t work as well with some games, especially multiplayers. The lack of removable controllers also makes it harder to share for competitive or co-op games.

Really, both Switch versions are an excellent choice depending on how you plan on using them. But overall, the Switch OLED is the better option to go with as it works with more games and is easier to share.

To understand the biggest differences between the handheld Switch and the latest Switch iteration, it helps to look at the specs. Take a gander, and then we’ll discuss the significance of this info further into the article.

The Switch Lite offers the same processing power as Switch OLED, but it cannot be played on TV. Plus, the larger Switch is far more suited to multiplayer gaming than the Switch Lite is.

The thing you probably noticed first when comparing these gaming systems is the massive price difference between the Switch Lite and the Switch OLED. The Switch Lite is a much less expensive option initially. However, it’s important to keep in mind that this $150 gap lowers significantly if you plan on playing multiplayer games on the Switch Lite or if you’re playing a game that needs rumble.

You see, unlike the larger model, the Switch Lite doesn’t come with removable controllers; it doesn’t have rumble capabilities, nor does it have a kickstand. So say you want to play Mario Kart 8 Deluxe with a friend on the same Switch Lite. You’ll need to purchase a set of Joy-Con to make that happen. Joy-Con will run you $80 or more a pop. Plus, you’ll need to invest in a stand of some kind since the Lite cannot prop itself up. Those are usually only about $15 or so. However, that already adds $95 to your Switch Lite total if you plan on playing multiplayer games.

The controller Joy-Con give more options

So what’s so special about the Switch OLED’s Joy-Con anyway? As I’ve mentioned before, they can slip on and off of the sides of the Switch, making it easy to play a single-player game in handheld mode or revert to multiplayer when they’re detached. They can be used together as one controller or can be divided, turned sideways, and work as two individual controllers for local 2-player on one Switch whenever you want. If you’re using them with the Switch OLED, that means they can be used while the Switch is docked to the TV or in handheld mode.

These versatile controllers make it easy to entertain multiple players on one Switch system while on road trips, seated together on the living room couch, or any other time players want to experience the same game together. The best local multiplayer Switch games can support 2-8 players depending on the game being played, as long as there are enough controllers to go around.

The Switch Lite’s controllers cannot be removed and thus make it harder to play multiplayer games unless you purchase Joy-Con separately. Fortunately, Joy-Con sync to the Switch Lite and work just as they would on the Switch OLED, aside from being able to attach and detach from the smaller system.

For anyone interested, there’s also the Pro Controller, which is sold separately from the Switch Lite and the Switch OLED. This controller has a more traditional build and is the gamepad of choice for most adult players. That’s because it has a better grip, and its larger size is more suitable for adult hands.

Games and subscriptions: Are the games the same?

The Switch, Switch OLED, and Switch Lite can play the same games for the most part. However, certain Switch games don’t play well on Switch Lite because they require a detached controller or a controller that uses rumble, which is a feature the Lite doesn’t have. Now, this primarily only applies to Switch games that released before the Switch Lite came out. But there might be a few more on the way that also have problems on the smaller Switch.

Otherwise, both Switch systems can take advantage of Nintendo Switch Online (NSO), a subscription service that lets you access online components of Switch games, like being able to race against people around the world while playing Mario Kart 8 Deluxe. Additionally, members can access a list of select NES and SNES games like The Legend of Zelda: A Link to the Past, Super Metroid, Super Mario Bros. 3, and much more.

It’s worth noting that the Switch OLED specifically has a LAN port in its dock for a better online connection when playing multiplayers. Meanwhile, the Switch Lite can only do a Wi-Fi connection.

If Switch OLED and Switch Lite owners are willing to pay a bit more for Nintendo Switch Online + Expansion Pack, they also gain access to a list of N64 games and Sega Genesis games. This includes classic titles like The Legend of Zelda: Ocarina of Time, Banjo-Kazooie, Sonic the Hedgehog, Mario Party, and much more.

Nintendo even sells N64 controllers for Switch as well as Sega Genesis controllers so you can play these retro games the way they were intended to be played. Just keep in mind that stock sells out quickly and each buyer is limited to a specific number of classic controller purchases.

Unfortunately, while the Switch OLED’s 64GB is double the internal storage space of the Switch Lite’s 32GB, both capacities aren’t that great. That only gives you room for about six large games on the bigger Switch OLED and three larger games on the small Switch Lite before you run out of room. You will need to purchase a microSD card to give yourself more space for the best Nintendo Switch games regardless of which Switch you choose.

When in handheld mode, the Switch OLED supports the same resolution as the Switch Lite at 720p. This isn’t very powerful compared to the latest phones; however, the low resolution isn’t noticeable on the small screens. The Switch OLED can also reach up to 1080p when docked to a TV. Obviously, this isn’t anything near the resolution capabilities of other consoles like the Xbox Series X or the PlayStation 5. However, most Switch games have simplified or cartoony graphics which don’t need that much detail.

Nintendo has also made it possible to play more graphic-intensive games on Switch using Nintendo Switch Cloud Streaming. This basically allows players to stream visually demanding games like Remedy Entertainment’s Control, Square Enix’s Kingdom Hearts 3, or Capcom’s Resident Evil Village on Switch without needing to upgrade Switch hardware. You just need to have an internet connection to work, and games must currently be available to stream.

Availability: Which Switch is easier to get?

The Nintendo Switch has been a very popular device ever since it was first released. However, over the last few years, that interest has skyrocketed. It’s not uncommon for these consoles to get snatched up super quickly when in stock. That being said, in my own experience, I have tended to see the Switch Lite on store shelves more often than the larger Switch and Switch OLED. Nintendo has also stated that due to chip shortages the company has been unable to keep up with Switch demand. So if you want a Switch OLED, you’ll have to snatch it up right away when you see it.

Parental controls: Which Switch is safer for kids?

When it comes to parental controls, the Switch Lite and Switch OLED are evenly matched. Parents can download the Nintendo Switch Parental Controls app from either the App Store or the Google Play Store. This will allow you to set limits for how many hours your child can play each day or make it so the Switch is inaccessible at certain times.

Additionally, this lets you make it so a password is needed to purchase digital games so your kids cannot buy them without you knowing. You can see what games they’ve been playing and even limit the kind of games they’re allowed to access.

Switch OLED vs Switch Lite: Which should you buy?

Both the Switch Lite and the Switch OLED are great gaming systems. However, the way you tend to play will determine which is a better fit for you. If you don’t see yourself ever wanting to play on TV or share your Switch with someone else for local multiplayer, then the Switch Lite will be a great choice.

If, however, you have multiple people in your home that will want to play, you’re better off getting the Switch OLED. Even though it doesn’t have a more powerful processing power, it really is the better system of the two. It’s larger, has a gorgeous screen that makes the visuals crisper and brighter, can dock to a TV, and features a LAN port, so any online multiplayers will have a stronger ethernet connection compared to a Wi-Fi connection.

OLED display and much more

Play your favorite Nintendo Switch games in handheld mode or while docked to a TV. The new OLED display gives game visuals a crisper, brighter look than you’d get on any other Switch.

It might not have all the features that the OLED Model does, but it’s cheaper and easy to travel with. Take it with you everywhere to entertain yourself whenever you want.