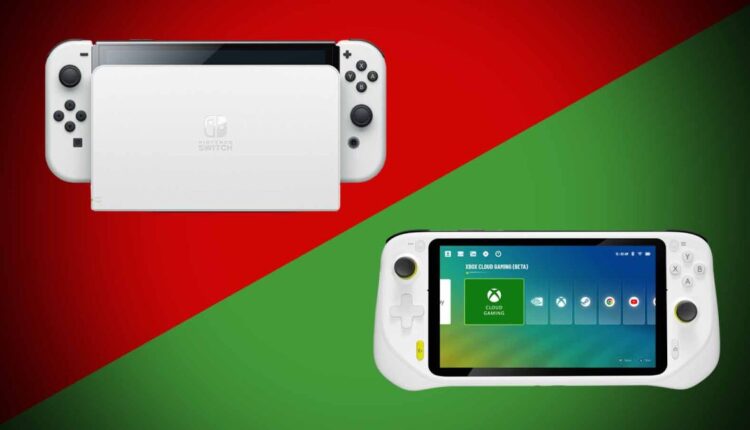 The Nintendo Switch OLED is the latest and greatest version of the Nintendo Switch, offering a larger 7-inch OLED display and a huge library of games, including several exclusives. The controllers are detachable for easy multiplayer on the go or you can dock the console to your TV. It can function as either a personal gaming system or a shared family console.

The Logitech G Cloud Gaming Handheld is like an Android tablet with controllers built in. It’s excellent for streaming gaming on services like Steam and Xbox Game Pass. You can also do almost anything that you would on your phone or tablet on this device. However, it’s rather pricey given that consumers already have a phone that does these same functions.

Which should you buy?

These devices are well made and work excellently for how they were intended. However, they are very different from each other. Nintendo Switch OLED is a gaming system used in handheld or TV mode to play an extensive library with many exclusives. Furthermore, players can enjoy it on their own or with friends due to its hybrid design.

Meanwhile, it’s best to think of the Logitech G Cloud Handheld as a reliable Android tablet with built-in controllers. The G Cloud can stream games from services like Xbox Game Pass or Steam and play locally downloaded games from the Google Play Store. Unfortunately, there are no exclusives, and sharing a split-screen game with someone from the device will be difficult.

Given that the two cost the same, it’s tough to justify the expense of the G Cloud since it does things that the average phone can do when connected to a phone controller. At the same time, the Nintendo Switch OLED offers exclusive games and a unique playing experience you can’t get anywhere else. If you want the Switch, but want to save some money, you can get the basic Nintendo Switch for $50 less. This removes the OLED display and halves the internal storage, though.

Though the Nintendo Switch OLED and Logitech G Cloud Handheld devices might look similar at first glance, they use very different hardware. They were designed for highly different functions within gaming. Let’s start by looking over the specs, and then we’ll dive into how they differ.

What do these features mean for you?

Switch OLED uses a custom NVIDIA Tegra processor that is relatively old compared with current processing options. However, Nintendo’s aim has never been to be the most advanced gaming system regarding resolution and hardware. The fact that the Switch OLED can be used on TV and handheld makes it a phenomenal entertainment source that you can take anywhere or even share with anyone. Developers designing games for Switch know the hardware’s limitations and usually do a good job tailoring to them (but not always). Nintendo’s first-party games tend to perform better than you’d expect.

The G Cloud’s Qualcomm Snapdragon 720G processor is more powerful than the Switch OLED’s, but it’s not industry-leading. More intensive games will be accessed via cloud streaming on platforms like Xbox Game Pass, so even if the processor is technically better than Switch OLED, it won’t prevent lag issues common with cloud streaming. It’s also worth noting that there are a handful of Switch Cloud Streaming games, and these also suffer from lag.

Speaking of streaming, tiles (icons) for Xbox Game Pass, Steam, and NVIDIA GeForce Now come preinstalled on the G Cloud, so you can easily access these services once you log into them. Remember that both the Switch OLED and G Cloud require a Wi-Fi connection when dealing with streaming or online components of games.

Regarding other connectivity, the G Cloud offers the latest Bluetooth 5.1, which is faster, provides better range, and is more accurate than Switch OLED’s ancient Bluetooth 4.1. So any devices you pair with the G Cloud (like wireless headsets and controllers) should theoretically work better on Logitech’s device. Although, in my hundreds of hours playing the Switch OLED, I’ve never experienced any delay on my headphones or controller.

How you play and controls

The detachable Joy-Con controllers make Nintendo Switch consoles stand out from any other on the market. These can be turned sideways and used as individual controllers for impromptu multiplayer gaming wherever you are. There is also a long list of multiplayer split-screen or couch co-op Switch games for people to enjoy together from one device as long as enough controllers are present. While most Switch multiplayers can host two to four players, many can host up to eight from one device. This makes it a great family console and a fun game night station. The G Cloud, in comparison, will mostly only be able to host one person.

The biggest downside of the Switch Joy-Con is that they do not have ergonomic grips, and many people find that holding them for long stretches is uncomfortable. The G Cloud, on the other hand, offers excellent, textured handholds that prevent that kind of discomfort from happening.

Motion controls and vibrations are present in compatible games on both devices. However, the G Cloud’s haptic feedback is refined with greater nuance and variation in rumble patterns. As far as the other controls go, the G Cloud’s D-pad is a step up from the Switch OLED’s four buttons on the left side, but otherwise, the rest of the buttons and triggers work pretty similarly and respond as they should.

The Switch OLED and G Cloud offer only 64GB of internal storage, but this can be expanded in both cases using a microSD card slot. If you’re only downloading small games from the Google Play Store and streaming intensive games via the cloud, the small space isn’t bad for the G Cloud. However, you must purchase a MicroSD Card for Switch since 64GB is only enough room for roughly six big games. Still, if you plan on using the G Cloud for more than gaming, it might be a good idea to invest in a microSD card there too.

As far as battery life goes, the G Cloud has the Switch OLED beat since it can last up to 12 hours, whereas the Switch OLED can only last up to 9 hours in handheld mode, but that depends on what kind of game is being played. More demanding games like The Legend of Zelda: Breath of the Wild sap the OLED of its power faster, so you might only be able to play for up to 4.5 hours before the battery calls it quits depending on what you’re playing. Of course, if you’re playing while the Switch OLED is docked to the TV, it will receive a charge the whole time and you won’t have to worry about the battery.

The G Cloud’s interface is far more open to customization than the Switch OLED, allowing you to access more apps. For example, there’s still no legal way to watch Netflix on Switch, but you can easily open the Netflix app from G Cloud. In addition, any apps you download get their tile on the G Cloud’s menu, so you can quickly reaccess them later.

Switch OLED vs G Cloud: What kind of games can I play?

The kinds of games owners have access to on Switch OLED is very different from what’s available on G Cloud.

There is an extremely long list of the best Nintendo Switch games, including dozens of exclusives that aren’t available on any other platform. Players can purchase physical and digital games, though many third-party games are only available in the Nintendo eShop. Here are some of the most notable Switch exclusives.

As we mentioned previously, the G Cloud Handheld is an Android tablet with attached controllers. This being the case, it doesn’t have any exclusive games, but it can access any apps you’d have on your Android phone or tablet. This includes Xbox Game Pass, which provides subscribers with a vast library of xCloud games. You can also play compatible Steam games from your library using Steam Link. However, since Xbox Game Pass xCloud games are streamed from a distant server and Steam Link streams from a computer, you’re likely to experience lag while playing.

Otherwise, G Cloud owners can go to the Google Play Store and download the millions of games available. However, the controllers will only work on games that offer controller compatibility. Here is an example of some games you could play via xCloud and Steam.

Nintendo Switch OLED vs Logitech G Cloud: Which should you buy?

Switch OLED and Logitech G Cloud are impressive devices that work well for what they were designed for. However, purchasing a Switch OLED is more worthwhile since it has a long list of exclusives that works on both TV and in handheld mode and can easily be shared with others in local multiplayer. On the other hand, the Logitech G Cloud is truly remarkable, but it basically acts like a phone with controllers attached. You can quickly transform your phone into something similar, but for much less, by buying a phone controller like the Razer Kishi. In that way, it’s unclear who the expensive G Cloud is designed for.

On top of that, the idea of cloud gaming is excellent, but we’re currently in a state where any games that get streamed tend to have pretty lousy lag at points (although this is often due to our personal internet connections and server relay rather than the devices we use). Since the most intensive games on G Cloud will mostly be streamed, it doesn’t matter that Logitech’s device has a better processor. Nintendo games don’t have the best resolution, but they are designed within the hybrid’s limitations and usually play smoothly.

Regardless of if you’re looking to play open-world adventure games or bust out a fun couch co-op multiplayer for game night the Nintendo Switch OLED has you covered. Play from the comfort of your TV or take it with you anywhere and play on the go.

Download any apps you normally would have on your phone and easily access them from the G Cloud. It’s excellent for streaming games from Xbox Game Pass or Steam. Plus, you can download and locally play games from the Google Play Store.