New Yorkers are unsafe, Gov. Hochul — stop pretending it’s all in their heads 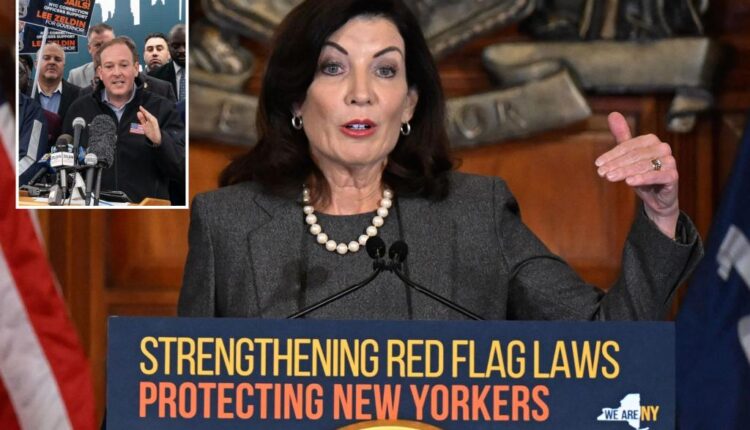 Even as she tries to pivot on crime in the face of Lee Zeldin’s surging challenge, Gov. Kathy Hochul still refuses to admit reality, dismissing the Big Apple’s hellishly rising subway and street crime as “high-profile instances which have created a sense of fear in people’s minds.”

That is, the problem is just perception.

And that comment isn’t an outlier: Hochul’s lame new campaign ad proclaims: “You deserve to feel safe, and as your governor, I won’t stop working until you do.”

That feels safe. Not be.

Crime is up more than 30% over the same period last year; subway killings have hit the highest levels in 25 years — but Hochul says the problem is your feelings.

And she still pretends New York’s disastrous criminal justice “reforms” aren’t part of the problem, dodging: “We’re willing to look at the laws again, but let’s look at the data.” In fact, the only data she seems to look at are cherry-picked stats that have been debunked again and again.

Follow The Post’s live blog for updates on the NY Governor debate between Kathy Hochul and. Lee Zeldin

By the way: The folks who passed these laws weren’t looking at the data then, but at “high profile instances” like the tragedy of Kalief Browder’s suicide after lengthy pretrial detention at Rikers. They passed them while refusing to take input from the state’s district attorneys, even progressives like Albany County DA David Soares. And now Hochul & Co. ignore Soares’ data.

The gov also falls back on absurdity, telling WNYC’s Brian Lehrer in August that letting judges apply a “dangerousness” standard would be too arbitrary. “Sometimes dangerousness is determined by the color of their skin and a perception of dangerousness,” Hochul said. “And that is an unfair system. That is not a justice system that we can be proud of.”

Huh? It’s on the books in every other state in the nation.

Even the substance of her pivot is pathetic: some state cash to support an unsustainable surge in subway cops and a few dozen new hospital beds for the mentally ill.

And this is with her political life on the line. New Yorkers have no reason to believe she won’t switch back to business as usual if she wins on Nov. 8. If you want to be safe, your only hope is to vote for Zeldin and every other Republican you can, to send the unmistakable message to Albany that you demand action on crime.

tvOS 16.2 adds feature where Siri will recognize your voice