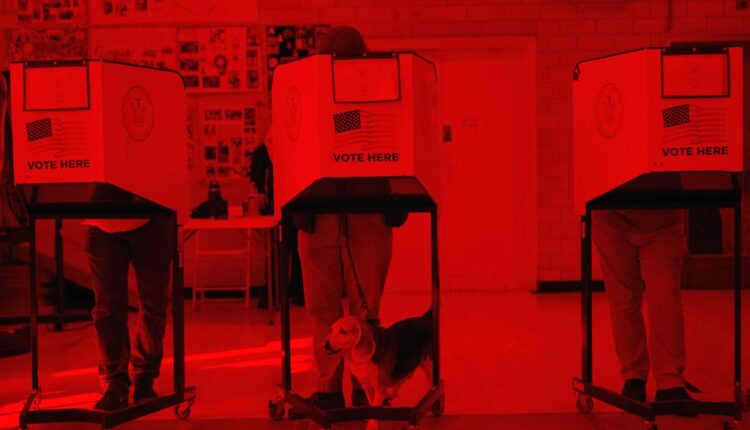 A friend writes to say that his wife and “some of her  staunchly D” female  friends, all pro-choice suburbanites, are voting for Republican Lee Zeldin for governor.

A former colleague working in real estate volunteers that he’s backing Zeldin “because this isn’t the Democratic Party I signed up for.”

Another Dem, a former top New York official, writes: “For the first time in my life, I just voted the straight Republican ticket for New York state. The Democratic Party has lost touch with the people they are supposed to represent.”

These are the voices of a potential earthquake.

One by one and in small groups, formerly loyal Dems are coming to the conclusion that the party they were proud to belong to no longer shares their interests and values.

Many cite the left’s relentless assault on convention and standards, and the effort to silence disagreement. Every institution is either under attack or has capitulated to the woke mob, turning liberals into conservatives.

The working and middle classes in whose name this revolution is being carried out are suffering the most from its excesses and now they, too, demand relief. That many are voting Republican explains why a red wave is forming across the nation and in even the bluest of states.

Something has to give — and it could be Kathy Hochul’s job.

On paper, the accidental governor and her party enjoy a 2-1 registration edge. But when things are bad enough, reality trumps party, and it is a testament to how high crime has climbed and how far the quality of life has fallen that Zeldin is on the cusp of being the first Republican elected governor in 20 years.

He is a Long Island congressman and former state senator, but the smart set considered him a long shot even after he won a contested primary in June. But Zeldin has proved a dogged campaigner and outworked Hochul, who foolishly allowed him to define the race while she took victory for granted and hid behind routine government appearances.

In her absence, the challenger has relentlessly hammered Hochul’s tenure on crime and disorder and laid out an ambitious agenda for public safety that involves removing Manhattan District Attorney Alvin Bragg and suspending criminal-coddling bail laws.

The trend has been Zeldin’s friend, with each day bringing fresh evidence that both the city and state are in a free-fall. Violent crime, combined with failing schools and a suffocating tax and regulation regime, are pushing record numbers of people to flee the Vampire State.

Polls have tightened, and some call the race a toss-up. One result is that, while Hochul built a huge cash firewall, Zeldin is getting enough financial support to be competitive on television.

Yet, truth be told, it is largely Hochul’s strange and feckless response to his charges that is giving the challenger his biggest boost. Emerging belatedly from the Rose Garden, she still offers no clear or forceful answer to his overarching theme of danger and decline.

To this day, she continues to flirt with the ridiculous idea that crime isn’t as bad as Zeldin says, which is tantamount to telling people that what they see isn’t true and their fears are groundless.

She calls Republicans “manipulators” and talks of a “conspiracy” driving the issue. When a Buffalo mother was killed by a man who had earlier been arrested for beating her and then released, Hochul blamed “the system.” Even Friday, she was telling CNN her opponent is “being dishonest.”

That’s her story and she’s sticking to it, and at this late date, we should take her at her word: she doesn’t believe crime is a serious problem in the city or the state.

If she did, she has had endless opportunities to say so and do something about it. Instead, she acts as if she’s the victim of an unfair attack.

Her mishandling of Public Enemy No. 1 raises two other features of her performance. She doesn’t appear to have a great passion for the job, nor does she display evidence of any special competence.

Recall that she became governor in August of 2021 when Andrew Cuomo resigned after multiple sexual-harassment charges were substantiated by investigators appointed by the attorney general. Until that moment, Hochul was viewed as impeachment insurance, meaning Cuomo was not likely to be removed because few people considered Hochul qualified for the job in her own right.

But Cuomo became so toxic that concerns about Hochul’s fitness were brushed aside.

Now those concerns are front and center again, and not just on crime. She has proven to be no match for the Legislature, which steamrolled her on an extravagantly wasteful budget and gave her almost nothing in return.

Most telling, the Dems in charge ignored appeals by her and Mayor Adams to change the notorious bail laws.

The one area where Hochul showed an independent streak — economic development — is revealing her to be a flawed steward of taxpayers’ money. Her gift of $600 million of state funds to the Buffalo Bills for a new stadium was such a lopsided deal that she has tried in part to justify the giveaway with the absurd claim that state taxes on high player salaries would repay the cost over 20 years.

Similarly, state subsidies reportedly totaling $5.5 billion for Micron to build an upstate chip factory work out to more than $600,000 per job — if Micron creates 9,000 jobs over several decades. If it doesn’t, the cost per job would increase.

There is also wide skepticism about her administration’s claim the deal will lead to 42,000 new private jobs in the area.

It’s no wonder Hochul needs outside political help, and she will end the race by appearing variously with President Biden, Vice President Kamala Harris and Bill and Hillary Clinton. The fact that she has to rely on them to get out the vote reveals how little enthusiasm she generates on her own.

Meanwhile, her attacks on Zeldin are mostly about his pro-life position and Donald Trump’s endorsement of him, along with Zeldin’s Jan. 6 vote to decertify some 2020 state results.

Regarding abortion, New York law already offers far more extensive protections than Roe v. Wade did. Zeldin concedes the point and is trying to take the topic off the table by saying he cannot change the law and won’t try.

Polling also shows that for many Dems and most independents, abortion and Trump are not nearly as important as inflation, the economy, crime and border security.

Because the election is likely to turn on those issues and because she has such a spotty track record, voters should ask themselves this crucial question: what would New York get if Hochul keeps her job?

Four more years of what she has delivered so far is not nearly good enough.