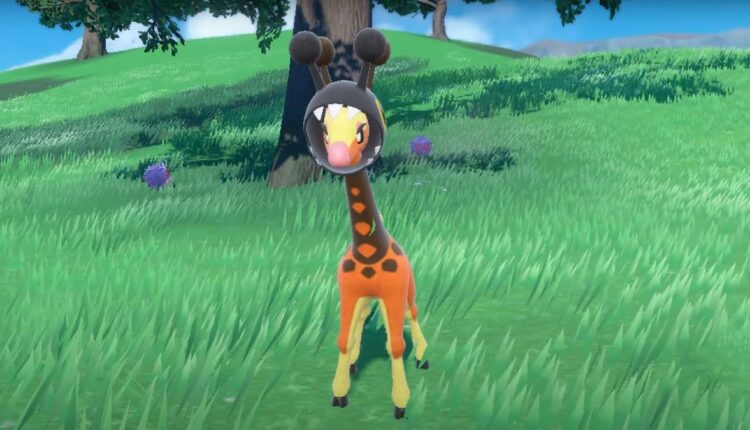 Today, a brand new trailer overview of Pokémon Scarlet and Violet released. In it, The Pokémon Company gave a more in-depth look into the overworld and battle mechanics in Gen 9. We also got to see a brand new Pokémon that hasn’t existed before: Farigiraf, which is the evolution after Girafarig. Here’s everything that was shown off during the latest trailer.

This new mechanic makes Pokémon shimmer like gems with crowns on their heads. All Pokémon in Paldea have one of 18 Tera Types. Sometimes it aligns with the Pokémon’s base typing, but it can also be any of the other Tera Types too. If it’s the same as the Pokémon’s base typing, then it enhances the Pokémon’s power. But if it’s completely different then it can change your Pokémon’s weaknesses when they Terastallize. If you come upon a Pokémon glowing in the overworld, then it will Terastaliize if you battle it. For the chance to catch one, go up to it and initiate a battle.

This command sends your lead Pokémon out onto the field to battle a wild Pokémon or to pick up an item. That way, you don’t have to engage in basic battles unless you want to. This is a new mechanic that should make the game more accessible to a wider audience. Especially those who don’t like grinding.

The trailer showed the main character going into Team Star’s base and getting attacked by opponent Pokémon. The main character was able to send out multiple of their Pokémon out to battle the blockade.

You can create your own Technical Machines (TMs) by going to a Pokémon Center and using items that Pokémon drop when you defeat them. For instance, creating TM 034: Icy Wind requires three Snom Thread, three Snover Berries, and 800 League Points (LP). Players can also exchange materials for LP at the Pokémon Center.

During the Path of Legends that involves fellow student Arven, players will have the ability to face off against The Stony Cliff Titan, Clawf. This is an enormous Pokémon, that is much bigger than normal. In some ways, it looks similar to the Alpha Pokémon found in Legends: Arceus.

Girafarig has long been a Pokémon that didn’t have an evolution, but that has changed with Scarlet and Violet. It evolves into the Normal/Psychic type, Farigiraf. According to the Pokédex entry, “the hardened head from the tail protects the head of the main body as Farigiraf whips its long neck around to headbutt enemies.”

Players who want to take on the Grass-type gym leader, Brassius, must first complete the Sunflora Hide-and-Seek challenge. There are several Sunflora hiding around the area and you will need to find them all.

Being able to control what your character looks like and how they dress has been a part of core Pokémon games for a while now, and the latest trailer shows off a number of hairstyles and colors.

Scarlet and Violet also has a camera feature where players can add filters, position the camera just so and take beautiful scenic shots or pictures of themselves with their Pokémon.

During Picnics, players can scrub their Pokémon and get them all clean. You can also play with all of the members of your party. Sometimes, Eggs can also be found when you have a Picnic with your Pokémon.

Create foods to share with your Pokémon team during Picnics and you might even get some stat perks for all of your Pokémon.

Similar to Max Raid Battles found in Sword and Shield, players can get together in multiplayer battles to take on Tera Pokémon. You must take down the sparkling Pokémon before the time runs out, but then you’ll get the chance to catch it.

If one of your Pokémon gets knocked out during the battle, it will need to revive before it can get back into the fight. While Pokémon-less, you can cheer other players on and provide stat buffs.

Pokémon Scarlet and Violet are set to release on November 18, 2022 and are currently available for preorder.

How to Find a Reliable Used Car

The iPhone 14 Plus reviews are in — better battery, bigger screen, still no Pro