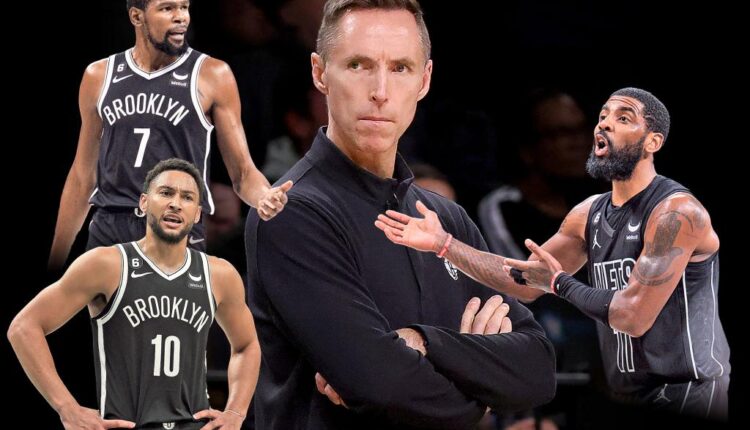 As you’ve likely heard by now, Steve Nash was ousted this week as head coach of the Brooklyn Nets.

The official word was that it was consensual. Nash, 48, in his third season as head coach of the Nets, tweeted the news like it was a retirement party, thanking his former team for the “amazing experience with many challenges” and for letting him “be a part of this beautiful community.”

But Nets General Manager Sean Marks was a bit more forthright, saying at a news conference that Nash never had “an even playing field.”

That’s a nice way of saying that Nash, who was hired as the team’s head coach in 2020, didn’t have the support of his team. Or, as Charles Barkley less-than-nicely said it earlier this week on “Inside the NBA,” several Nets players — most notably Kevin Durant, Kyrie Irving and Ben Simmons — were “acting like fools and jackasses.”

Barkley isn’t wrong. Since Nash took the reins, their antics included refusing to get vaccinated, being publicly anti-Semitic — which got Irving suspended without pay for at least five games — and demanding that Nash get fired; not a good look for any team, in any sport.

Probably the best perspective on what happened came from Steve Kerr, the nine-time NBA champion (five as a player and four as a coach) and head coach for the Golden State Warriors, who called Nash’s exit a “good reminder to me and I think to all coaches that we are all at the whim of players, front offices, ownership.”

Nash has become a canary in the coalmine for modern basketball coaching. He’s proof that it’s not just about winning and losing anymore. As John Lucas III, an assistant coach with the Los Angeles Lakers who runs a training program for aspiring NBA coaches, told The New York Times this summer, a core tenant of being a successful coach in 2022 is “being able to deal with egos.”

Which isn’t entirely new. Phil Jackson, who led the Chicago Bulls to six NBA championships during the ’90s, had to deal with some massive and unreasonable egos, whether it was Michael Jordan suddenly quitting to play baseball or Dennis Rodman disappearing to party in Vegas or wrestle with Hulk Hogan. But none of it ever felt like a major distraction to Jackson. As he wrote in his book, “Eleven Rings: The Soul of Success,” he had a Zen monk approach to managing stars. “Give them a lot of room and encourage them to be mischievous,” he wrote. “Then watch them.”

Of course, it was easier to let players be mischievous in the last century, before social media existed. Now managing players is harder than ever before. And it’s even worse for NCAA coaches, who have to contend with the transfer portal, created in 2018 to allow players to leapfrog between schools without getting penalized. Throw in the new image and likeness rule — student-athletes can now profit from everything from social media posts to in-person appearances — and coaches are spending more time doing damage control off the court than on.

It’s at least part of the reason why iconic coach Jay Wright, 60, announced his retirement last April, after 21 seasons coaching at Villanova University and more than three decades in a Hall of Fame career that included two national championships and eight Big East regular-season titles.

“I started to feel just like I didn’t have the edge that I’ve always had,” he explained during a news conference. He didn’t elaborate on exactly what he meant by “edge,” but it’s hard not to read between the lines. It felt like the same soft-shoeing I heard from the coach of my five-year-old’s tee-ball baseball league when he abruptly quit, telling the parents only that he wasn’t able to “give your kiddos the attention they deserve.”

What he was really saying was, “Your kids are eating grass and they all have ADHD, and one of them pooped his pants sliding into third base. This is not what I signed up for.”

That’s what pro sports coaching has become. They’re glorified tee-ball coaches with better salaries but equally migraine-inducing demands. Is there really a difference between the coach who has to tell the outfielders to stop chasing squirrels and focus, and the coach who has to ask his star players to please cut it out with the anti-Semitic tweets?

I don’t blame Nash or Wright for getting the hell out, any more than I blamed my son’s tee-ball coach for finding a better way to spend his weekend. Let somebody else babysit these fools and jackasses.

Eric Spitznagel is the Executive Editor of The Arrow, a digital newsletter from AARP created by and for Gen-X men.

Our 10 Top Cars from the wonderful London Concours 2022