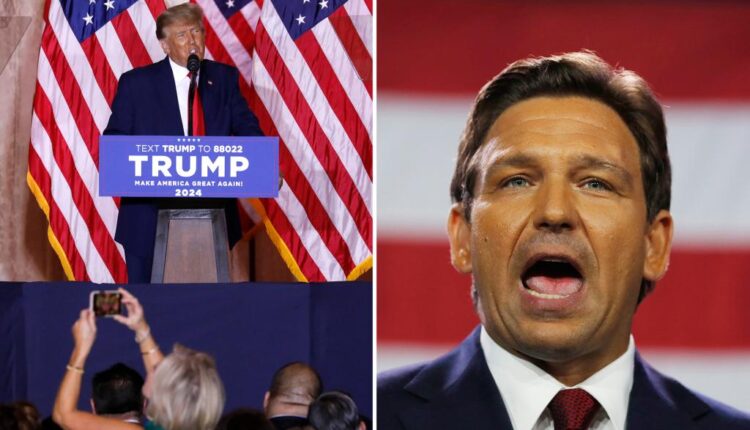 For a change, Donald Trump’s rushed announcement that he will run in 2024 wasn’t just about past grievances from the 2020 election and a grimly dark picture of where America is headed. He may be listening — for now — to all those around him who told him what a drag on the Republican ticket he was in this election.

Despite his huge base of supporters, Trump was much less popular than the party he seeks to lead. A Washington Post scorecard found that GOP House candidates outran Trump’s 2020 margins in 344 out of 435 districts, or about 80% of the time.

Exit polls have flaws, but their sampling of actual voters provides the best clue we have of what the 2024 electorate will be looking for.

Trump’s favorability rating among exit poll voters was a dismal 39%, and even in places like ruby-red Texas, it was only 45%. In 2020, Trump won 47% nationwide in his re-election bid. Nearly three out of 10 voters this year said their main reason for voting was to oppose Trump, even though he has been out of office for two years. Only 16% said their main reason was to express support for Trump.

If there is one single explanation for why the 2022 midterms were so different from others, it’s this: It became a referendum on Trump almost as much as it was on Joe Biden’s failures. That’s never happened before.

Consider: In previous midterm elections where an incumbent president’s approval ratings were in the low to mid-40s, his party took a shellacking. Democrats lost 63 House seats in Barack Obama’s first midterm. In 2018, Republicans lost 40 House seats fighting an anti-Trump undertow. Biden, for all his shortcomings, led Democrats to only an eight-seat loss in the House and continued control of the Senate.

The difference leaps out at you from the exit polls. People were genuinely disappointed in Biden. But the 10% of voters who said they “somewhat disapproved” of his record actually voted for Democrats over Republicans by four points.

“Republicans failed to make this into a referendum campaign,” Ken Spain, a former Republican campaign strategist, told NBC News. “The candidates who underperformed in battleground states and districts had one thing in common: Trump’s endorsement.”

Americans love a winner, and Republicans are clearly shifting their 2024 presidential preferences based on the drag Trump was in the midterms.

A new Economist magazine/YouGov poll found that among Republicans, Florida Gov. Ron DeSantis has surged to a 46% to 39% edge for the 2024 nomination. Perhaps even more important, new polls by the conservative Club for Growth Action show that the early primary states are even less favorable to Trump. DeSantis beats Trump by between 11 (Iowa) and 26 (Florida) percentage points, with strong leads also in Georgia and New Hampshire.

Of course, the primaries are more than a year away. But it’s safe to say that Donald Trump begins his third run for the presidency at age 76 with a major challenge: How can he convince Republicans he is still a winner?

John Fund is a columnist for National Review and co-author of “Our Broken Elections: How The Left Changed The Way You Vote.”