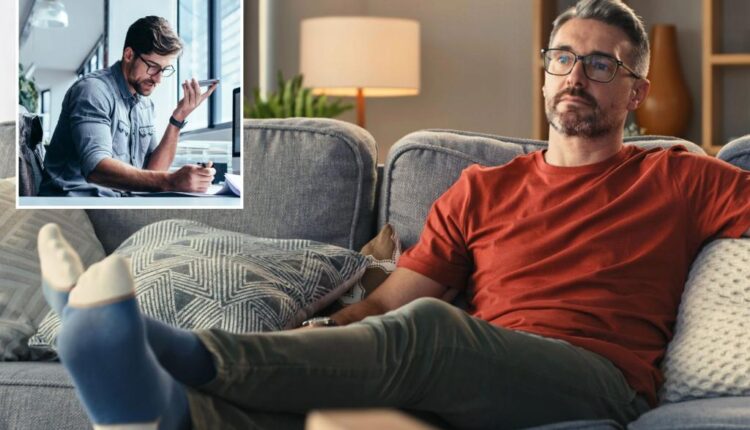 America’s post-pandemic employment picture is an unsettling paradox. On the one hand, job totals are finally back above pre-pandemic highs — and unemployment rates skirt 50-year lows.

But at the same time, overall work rates are lower than they have been since the 1980s — and millions of workers who dropped out of the labor force during the COVID-19 lockdowns have yet to return. A peacetime labor shortage has erupted, yet vast numbers of men and women are still sitting on the sidelines of the economy.

America is renowned for its work ethic — and rightly so. The average worker in the United States clocks more hours each year than those in Canada, Australia, Western Europe and now even Japan.

But those are the work patterns of US men and women holding down a job. A “flight from work” in modern America is simultaneously afoot.

It first became evident among men in the prime of life, between 25 and 54. Today over 7 million of these men of “prime working age” are neither working nor looking for work. And now, in the wake of the COVID calamity, the “men without work” syndrome seems to be spreading, afflicting parts of the US workforce that did not suffer from it before the pandemic. Work rates for older Americans (55-plus) remain stuck at pre-vaccine levels. Warning lights seem to be flashing for prime-age women as well.

Modern America’s flight-from-work problem began in the 1960s, among prime-age men. For the first two decades of the postwar era, their work rates and labor force participation were consistent and high. Then something happened.

Ordinarily, prime-age men are society’s providers, but a steady retreat from the workforce has been underway among this crucial contingent for over half a century. Today work rates for prime-age American men are actually lower than in 1940, when America’s unemployment rate stood at almost 15%.

Yes: Prime-age American men have a Depression-scale work problem today. But unlike in the Depression, the postwar collapse of work for men has little to do with unemployment per se. Rather, it has been driven by an exodus from the labor force.

At the time of writing, for every unemployed prime-age American man looking for a job, there are over four neither working nor looking for work (NILFs: “not in labor force”).

For two generations the flight from work has exhibited uncanny regularity. Six years ago, when my book “Men Without Work” first appeared, I showed that rising prime-age male NILF rates traced out a near-constant path from 1965 through 2015 — practically a straight line, steadily heading upwards, all but unaffected by business cycles or other notable events. Today, unaccountably, it remains on almost exactly the same trajectory as in 2016: six world-shaking years and one global pandemic later! At present, the prime-age male NILF rate is at three-and-a-half times its 1965 level.

Received wisdom in academic and policy circles sees declining male workforce participation as a matter of “economic and structural change” — reduced demand for less-skilled work, technological innovation and disruption, globalization and the like. True to an extent, but that “demand focused” storyline is critically incomplete.

Those conventional explanations can’t account for some of the most basic characteristics of the postwar male flight from work — not least its relentless, near-invariant nature. Further, given today’s unprecedented peacetime labor shortage, variations on the “no work to be had” argument are no longer tenable. Major sectors of the economy are now wide open to applicants without any great skills, apart from the “skills” of showing up to work regularly, on time and drug-free.

In the post-lockdown recovery, job openings soared. Since Labor Day 2021, unfilled non-farm positions have averaged over 11 million a month. For every unemployed man and woman in the United States today, there are nearly two open jobs. The current labor shortage affects every sector of the economy and every region of the country.

Why this extraordinary imbalance between the demand for work and the supply of it — in a market economy? Aren’t markets supposed to seek equilibrium?

Yes, but markets solve economic problems; they do not cure social pathologies. Record-high job vacancies coexist with Depression-level work rates for men because a vast pool of unworking prime-age men — and increasingly, also others — apparently cannot be lured back into the workforce no matter how tight labor market conditions get, no matter how much bargaining power workers possess from labor scarcity (as they currently do under the so-called “Great Resignation”).

In absolute terms, the current level of unfilled jobs is about 4 million higher than the immediate pre-COVID level. And today’s manpower levels are roughly 4 million workers lower than if the workforce had kept growing on its pre-COVID trend. America’s post-COVID worker shortfall, in other words, closely mirrors the new post-COVID workplace gap in missing manpower that employers want, but simply cannot find. It is almost as if the old “lump of labor” fallacy found a real-world proof of its existence.

We cannot understand post-pandemic labor market anomalies if we focus only on the pandemic itself. To understand our current problems, we must also examine the policy response to it.

In 2020 and 2021, Washington pulled out all the monetary and fiscal stops to avoid an economic collapse in the face of the pandemic. Those interventions may indeed have forestalled a global depression. But they also inadvertently disincentivized work in America as never before — far beyond what any public health rationale could possibly have warranted.

America’s COVID-era economy is a study in unintended consequences of massive government action. Ironically, thanks to full-throttle transfer payments funded by borrowed public money, disposable income in America spiked in 2020 and 2021, actually reaching previously unattained heights despite the COVID recession. This may be the only “national economic crisis” in history in which purchasing power rose.

Thanks to Washington’s emergency relief transfers, in fact, Americans had more money in their pockets during pandemic emergency years than they cared to spend. Thus a jaw-dropping, totally unforeseen, doubling of personal savings rates during a time of national economic crisis.

Over 2020 and 2021 a windfall nest egg of over $2.5 trillion was bestowed to Washington on private households via public debt. Those “COVID-policy winnings” could supplement earned income — or substitute for it.

COVID payments also provided cash to keep people out of work more directly. Remember the famous $600-a-week pandemic “unemployment” benefit, available almost unconditionally in 2020 and 2021 (when it was lowered to $300) — and never limited to the technically unemployed alone. At the peak of the program, recipients outnumbered the unemployed by 17 million, almost 150%. In effect, Uncle Sam stumbled into a test-drive of a “universal basic income,” or UBI, without much attention to its impact on behavior or expectations of prospective workers.

The current manpower gap in our domestic labor force highlights the new face of the flight from work in modern America. This is not just the old pre-COVID “Men Without Work” problem. Quite the contrary: Only a small fraction of our post-pandemic manpower shortfall is due to prime-age men.

Half or more of the gap is due to men and women 55 and older (perhaps especially those over 65). Strangely, labor force participation rates for the 55-plus group remain lower now than in summer 2020, before the advent of COVID mRNA vaccines.

For a generation — from the mid-1990s until the eve of the pandemic — trends for older Americans were one of the few bright spots in the US employment picture. And these older Americans, almost all born before 1965, grew up with earlier postwar values, including a robust work ethic. So why is their post-pandemic workforce participation floundering today, in a seller’s labor market?

“COVID shyness” may play a part, although well over 90% of older Americans are fully vaccinated. And some from the “missing gray workforce” may be staying home to care for others, given the pandemic’s aftershocks. But many appear to have gone into a sort of premature retirement, tempted by COVID-era financial windfalls, including pandemic emergency transfers.

After a painful generation of stagnation, net worth for the bottom half of American households nearly doubled between yearend 2019 and yearend 2021, rocketing up by almost $1.8 trillion. In effect, these 64 million US households won a “COVID policy lottery,” reaping an average of about $25,000 per home. Many of these winners were over 55, people who had accumulated little in the way of a nest egg for retirement. Right before COVID almost 11 million homes headed by men and women 55 to 74 years old — over one in five — had less than $25,000 in life savings.

“COVID jackpot” payouts look to have played a role in the withdrawal of many older men and women from the post-COVID workforce. (“Wealth effects” may also have affected work rates for more affluent Americans, too.) Whether those payouts can provide a permanent alternative to earning a living remains to be seen. Some of these new COVID-era retirees may find their retirement is financially unsustainable. But we will only know how large that group turns out to be in the fullness of time.

For America’s post-pandemic workforce, the question is: shock or shift? Are we watching a gradual return to old work patterns, or an emergence of new ones? COVID policy disincentives seriously distorted the labor market’s immediate response to seismic shocks of 2020. Have longer-term work norms and attitudes been infected too?

Self-reported time-use surveys may offer some preliminary hints. Men without work showed the grim self-portrait they reveal for uncorking prime-age men: checked out from civil society; largely disengaged from family care and housework; sitting in front of screens as if they were a full-time job — habits increasing the risk of falling victim to “deaths of despair.”

There are unconformable echoes of the men without work disease in some of the COVID-era time-use readings among older Americans — especially in NILF men aged 55 to 64. Some too for some prime-age women — especially those without children at home, not currently married and neither employed nor in education and training (NEET). We also see a worrisome prevalence of medication, or self-medication, for pain in those other groups.

In 2021, at least 45% of both NILF male 55- to 64-year-olds and prime-age NEET women without kids at home or current spouses reported taking pain medication every day — almost exactly the same rates as among prime male “men without work” in 2013.

Warning signs that growing numbers of Americans are ambivalent about — or allergic to — working should not be ignored. For the flight from work is much more than just an economic problem. Success through work, no matter one’s station, is a key to self-esteem, independence and belonging. A can-do, pro-work ethos has served our nation well. America’s future will depend in no small part on how — and whether — our people choose to work. And that question will only grow in importance as our society ages.

Reprinted with permission from The Spectator.

No, Randi Weingarten, parents won’t give you ‘amnesty’ for the damage you did our kids