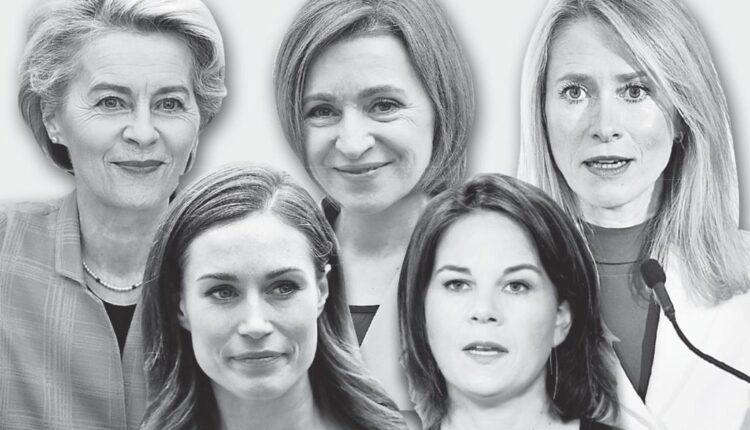 It’s striking, the large number of brave women who are leading the protests against Iran’s violent and vicious theocratic regime. It’s likewise notable that young women lead the Ukrainian organization just awarded the Nobel Peace Prize. Arguably less noticed yet equally important: Across Europe, it’s women who are transcending political and geographic boundaries to call for an end to Russia’s brutal aggression.

Annalena Baerbock is Germany’s (first female) foreign minister. The Greens, her party, have evolved from a pacifistic, anti-American faction to a pragmatic, responsible voice in European security. Baerbock herself has gone through a radical transformation.

When Russia invaded in late February, she opposed German military assistance to Ukraine — as a matter of principle, Germany has opposed such aid to conflict regions.

That was then. Now Baerbock leads the charge to supply Ukrainians with the means of self-defense. She has been calling for heavier weapons since early spring. She stands as the first prominent German politician to admit Germany has been flat-out wrong on Russia.

Unthinkable a few months ago (and still for many German elites today), Baerbock says: “We will achieve security only without, not with, Vladimir Putin’s Russia.” She’s been so steadfast, the Russians have run disinformation campaigns against her. To no avail: Baerbock’s popularity in Germany — and Ukraine — is on the rise.

Finnish Prime Minister Sanna Marin got attention recently when asked about President Joe Biden’s comments about finding Putin an “off-ramp” to end the war. Her reply was to the point: “The way out of the conflict is for Russia to leave Ukraine.” The line would have likely earned her a standing ovation in the Finnish parliament.

Until this year, Finland was viewed as a mostly dovish, neutral member of the European Union. Since the Russian invasion, Finns have been racing to NATO’s door. They have an 830-mile border with Russia and bitter experience with the Soviet Union. The prospect of new Russian imperialism has focused the mind in Helsinki.

Marin is the youngest-ever Finnish PM (taking office at 34), a Social Democrat brought up by two women (in a “rainbow family,” as she puts it). She was the first in her family to graduate from college. She worked her way through school as a cashier in a bakery. Today, she is Thatcherite steel.

Estonian Prime Minister Kaja Kallas didn’t need schooling about the Russian threat. On Feb. 19, five days before the invasion, Kallas explained how Putin plays: He demands, she said, the maximum for something that was never his, threatens with ultimatums and escalates when he doesn’t get his way.

Kallas, a lawyer by training, represents a center-right party. The Soviets deported her mother (at 6 months old) and grandmother to Siberia. Under her leadership, Estonia is per capita the biggest contributor of military assistance to Ukraine.

Americans have long belittled the ineffectiveness of a feckless and toothless European Union. Ask people who the president of the EU Commission is, and their eyes glaze over. Christian Democrat Ursula von der Leyen may change this.

As Angela Merkel’s defense minister she came off as bland and underachieving. In 2015, she defended Germany’s refusal to supply Ukraine weapons: “Weapons deliveries would be a fire accelerant.” As the first female European Commission president, she’s been resolute. “This is a war on our energy, a war on our economy, a war on our values and a war on our future,” she says today.

The mother of seven was the first to visit the sites of massacres in Bucha and Irpin — before Boris Johnson and other Western leaders. Von der Leyen has been schooled by Eastern Europeans: “We should have listened to those who know Putin.”

Maia Sandu, the petite 50-year-old president of Moldova, remains fearless as ever. Street demonstrations over energy prices stoked by Russian agitation threaten to destabilize Europe’s poorest country. Under Sandu’s leadership, Moldova has accepted a large number of refugees and remained staunchly pro-Western. This, despite having virtually no armed forces and being 100% dependent on Russian gas.

Russia partly occupies Moldova, in the area called Transnistria. Sandu says: “Russia’s unjust war against Ukraine clearly shows us the price of freedom.” She ran on a reform and anti-corruption platform and won despite vicious Russian disinformation campaigns against her. Her influence goes beyond Moldova — I can say this as a citizen of Romania.