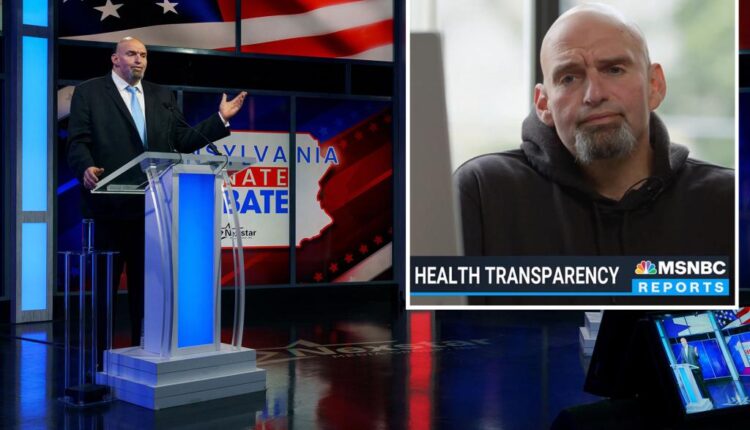 Given Pennsylvania Senate candidate John Fetterman’s disastrous debate performance Tuesday night and his campaign’s shameful coverup of his condition to voters, the question has to be asked: Where does Dasha Burns go for her apology from her own colleagues?

When the NBC reporter had a one-on-one interview with the Democratic candidate this month, she noted two things that had her fellow journalists, both at her network and in her industry, up in arms. First, she revealed the Fetterman campaign demanded, as a condition of the interview, he be allowed to use captioning software that translated her questions to him on a computer. Fetterman had not done a single one-on-one, live or recorded interview, through the duration of his limited campaign, so this was eye-opening to voters and viewers. And she remarked that “in small talk” with Fetterman, “it wasn’t clear he understood what I was saying.”

This led to a social media cavalcade of abuse directed at Burns for simply committing the act of noticing Fetterman’s condition.

Most notable was former New York Times writer and podcaster Kara Swisher, a victim herself of a stroke, who insinuated Burns was either lying or just bad at her job: “Sorry to say but I talked to @johnfetterman for over an hour without stop or any aides and this is just nonsense. Maybe this reporter is just bad at small talk.” Swisher was referring to a podcast interview, in which of course a listener can’t know what’s happening behind the scenes. Burns was even attacked by her own network, with Lawrence O’Donnell saying, “I have a confession to make. I used a teleprompter in this interview last night. The truth is I am not able to do my show without a teleprompter” — comparing news anchors reading text to a crippling and devastating cognitive condition. Gisele Fetterman, the candidate’s wife, demanded there be “consequences” for Burns.

The debate made it clear the Fetterman campaign has been obfuscating his obvious and serious condition for months. That’s bad enough. But reporters have abetted Democrats, writing it off as simply a hearing problem or auditory-processing issue. Fetterman claimed his condition involved just “mashing a few words together.”

It seems clear that journalists are attempting to drag a severely impaired Fetterman across the finish line in two weeks in hopes of keeping a Democratic majority in the Senate. In an age in which everyone has a video-recording phone, there doesn’t seem to be much footage of Fetterman speaking on the campaign trail. Journalists in attendance are happy to quote Fetterman and post photos — but no video. Does the Fetterman campaign demand journalists turn over their phones or is this voluntary behavior to hide his impairment?

Most important, other than one editorial by The Washington Post, media outlets have been content to let Fetterman skate by without releasing his full medical report. While journalists write and interview neurologists on Fetterman’s condition in an attempt to explain it away, he has yet to release his own records — besides a doctor’s note written by a donor — and without pressure from media outlets.

John Fetterman is not well. Everyone could see that Tuesday night. He may yet recover. But the reputation of journalists, who have continued to undermine their own credibility for years, will not recover. They’ve been caught in a coverup.

Stephen L. Miller has written for National Review, the New York Post, and Fox News and hosts the Versus Media podcast. Twitter: @redsteeze

All Pokémon games ranked from worst to best