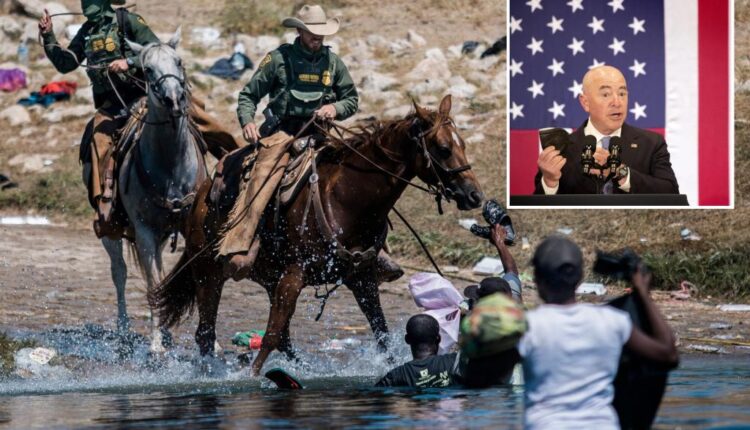 Homeland Security Secretary Alejandro Mayorkas has to go. In a bombshell revelation, the Heritage Foundation obtained emails showing his own staff told him last year that reports of border agents whipping migrants near Del Rio, Texas, were false — before he went to the White House and publicly smeared his own agents as racists anyway.

Mayorkas flat-out lied. Just two hours after being informed the very photographer who captured the viral Sept. 19, 2021, pictures of mounted Border Patrol officers confronting Haitian migrants said no whipping occurred, he declared: “Our nation saw horrifying images that do not reflect who we are. We know that those images painfully conjured up the worst elements of our nation’s ongoing battle against systemic racism.”

His job as a leader was to stand up for the agents under his authority and make plain that they were being wrongly accused. Instead he waxed poetic about “systemic racism,” and days later, indignant, he promised Congress there would be an investigation: “It will be completed in days — not weeks.”

In the end, it took a year, and it cleared the agents of whipping, noting they’d only used their reins to control their horses, though they still face potential punishment for other supposed violations.

How can we ask the brave men and women who patrol our southern border to work for a man who is willing to paint them as vile racists for his own political gain?

It’s bad enough that border security under Mayorkas is a shambolic clown car, with more than 200,000 people crossing the southwest border in August alone — that’s just bad policy. But to knowingly lie about his agents, smearing them? That’s unforgivable.

As cynical and sinister as the secretary’s actions were, there is something deeper here than mere mendacity and political avarice. This defamation of innocent border agents is another example of the havoc wrought by our society’s unhealthy and debilitating obsession with race and identity. The Brigham Young University volleyball hoax, the NASCAR noose hoax, the Jussie Smollett hoax and the border-agents-whipping-migrants hoax: Time and again we’re outraged over fake racism, facts be damned. It has to stop.

Unfortunately for the men and women who serve under Mayorkas, he cares more about scoring woke progressive points and kowtowing to a Biden administration that lives to sow racial division than he does about his agents or his country. This is an alternate reality in which the border is actually secure and there is no crisis except for menacing racists on horseback cast straight out of a Quentin Tarantino movie.

This situation cannot stand. If Mayorkas won’t do the honorable thing and step down, President Joe Biden should fire him.

But that’s unlikely, because we know the president, his vice president and his press secretary tripled down on Mayorkas’ lie. “To see people treated like they did, horses barely running over, people being strapped — it’s outrageous,” Biden said that day in front of Mayorkas.

That gave Mayorkas a choice: Carry water for his boss or stand up for the people he represents and should care for. Biden put him in that position.

We also know that a gleeful news media that ran with this fake story will be in no rush to inform their audiences that it was a bag of nonsense.

Anyone who has been to a border town like Del Rio, Texas (something that neither Biden nor his border czar Kamala Harris has deigned to do) finds out one thing fast: The people in these tiny towns love their border agents — it seems like half are related to them. Mayorkas didn’t just defame just a few officers; he didn’t just defame Border Patrol as a whole: He defamed entire communities he is sworn to protect.

Del Rio is a town of 35,000 souls. Last year, 15,000 Haitians migrants amassed in an encampment at its border. That’s the equivalent of 4 million sitting on the edge of New York City. Hotels’ electric marquees sent messages of thanks to the Border Patrol; signs abounded offering law enforcement free plates of food, pickup or delivery. Rounds were stood for agents at watering holes. The gratitude was palpable. These are the people the man entrusted with our border’s safety so casually slandered.

Alejandro Mayorkas is not fit to serve as homeland security secretary. Frankly, I’m not sure he’s fit to manage a Wendy’s. The American people need border security, not race-baiting. By choosing the latter, Mayorkas has disgraced his office. He shouldn’t hold it for even one more day.

David Marcus is a Brooklyn-based columnist and author of “Charade: The Covid Lies That Crushed a Nation.”

iMore Show 814: Is the Elon Musk Twitter Saga finally over?