Mayor Adams, stop trying to fool people that the crime crisis is all in their heads 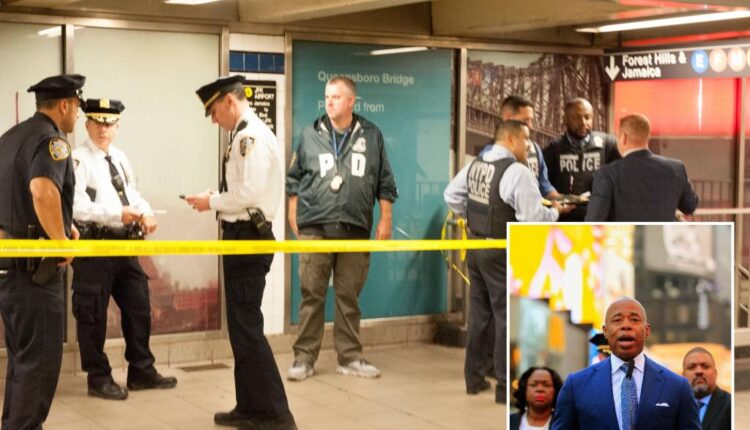 Mayor Eric Adams will never ensure public safety on city subways if he won’t even admit the problem, as seemed the case Monday.

“We’re dealing with the perception of fear,” Adams said, downplaying the record number of mass-transit slayings. The subway’s “average of six crimes a day is not giving the perception our system is out of control,” he added, noting that 3.5 million people a day use the system.

Huh? Is Hizzoner channeling pro-crime City Councilwoman Tiffany Cabán, who shrugged off subway violence as “a one-in-a-million event”? The problem with their argument: No one wants to be that “one” (or “six”) — and the thought terrifies everyone.

As Nicole Gelinas notes, Gotham’s “growing” subway-death toll is “horrific” not only for victims” but for “the city’s health.” From March 2020 through last weekend, a span of less than 20 months, the system saw 22 murders; through 2019, it took nearly 13 years to accumulate that many. The 2022 toll is already the highest in 25 years.

And just hours after Adams spoke came yet another subway homicide, when a man in a scuffle fell to the tracks in front of an oncoming train.

Sorry, Mr. Mayor, subway crime is out of control. That’s both the perception — and the reality.

Hizzoner compounded his error by answering a question on the subway murders: “There are too many guns on our streets. . . . They’re also in our subway system, they’re also in our schools, they’re everywhere.” Huh? Only three of the 17 subway homicides this year and last involved guns.

Indeed, as MTA President Richard Davey confessed Tuesday, “Even the presence of police hasn’t been able to stem” much mass-transit crime.

Rep. Lee Zeldin had a better take Tuesday: “Clearly, more has to be done to protect safety” on the subways, he insisted, flagging the “senseless” murder of Michelle Go, pushed to her death in front of a train in January, and the Green Goblin gang, “who didn’t show up with guns” but attacked innocent riders nonetheless. Subway crime involves “a whole bunch of other dynamics beyond” firearms.

Zeldin has centered his campaign on reining in crime — above and below ground. Adams did, too, last year — routinely turning up at crime scenes and slapping down every rival who tried to pass off the crisis as just “perception.”

You won by not denying the reality that New Yorkers live, Mr. Mayor. Don’t tell us to ignore our own lying eyes now.

Apple reveals the Magic Keyboard Folio, an exclusive accessory for the new iPad