Mayor Adams needs to quit being patient with Biden, Hochul 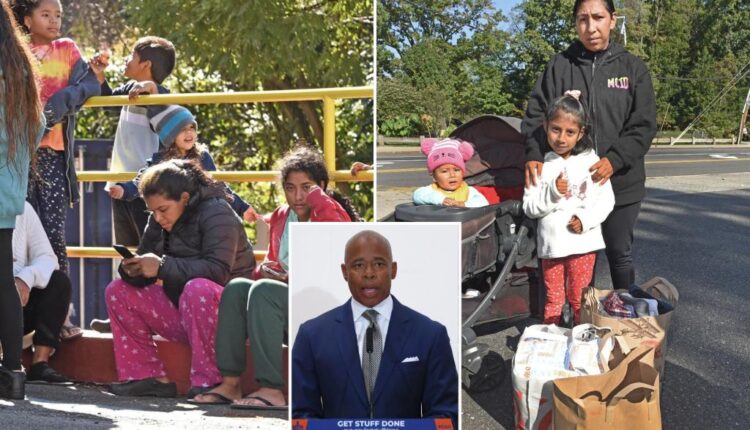 Gov. Kathy Hochul and President Biden are cynical hypocrites. Despite claiming to be the party of compassion, they haven’t lifted a finger to help the flood of migrants coming into the country — and Biden has done nothing to stop it.

Instead, a family crosses the border after a perilous and increasingly fatal journey, gets put on a bus or plane and is unceremoniously dropped off in New York City. It’s up to city taxpayers to feed, clothe, shelter and educate them — 19,000 so far, and that number’s rapidly rising.

As The Post reported, one elementary school, PS 33, has been sent roughly 90 migrant students without any plan on how to help them — and just one certified Spanish-speaking teacher.

Begged for financial assistance, or even an acknowledgment of what’s happening, Biden ignores the question.

Asked if she’ll let upstate New York share the burden, Hochul stares blankly at the reporter, then calls on someone else.

The reason is obvious: They know this open-border policy is hugely unpopular and don’t want to talk about it, certainly not before the November midterms. Hochul needs those votes in Buffalo and Albany.

So they let New York City shoulder the burden alone. A compliant media is happy to talk about something else — or worse, make it only about Texas Gov. Greg Abbott while ignoring the far larger crisis.

Mayor Eric Adams is left to deal with the consequences alone.

“I know it’s difficult to have the patience sometimes, but we have been communicating with our federal and state partners,” he said Tuesday. “I believe that we are going to start seeing some influx of assistance that I can point to.”

Asked the obvious followup — what has the state or federal government promised? — Adams admitted, “There’s nothing that I can point to.”

Here’s a prediction: “Patience” is meant to get us to Nov. 8, then maybe we’ll see federal aid programs and buses traveling upstate. It’s detestable.

Mr. Mayor, we urge you to speak out far more loudly. We understand you’re a Democrat and have to show loyalty to that party — and that you may be threatened in backrooms if you break that loyalty. This paper endorsed you because you were willing to go against the grain and speak sense on crime, against the prevailing “Defund the police” line your party took.

We cannot have “patience,” not when buses arrive daily and planes arrive nightly.

If you stand up for what’s plainly right to everyone — except those whose sight has been fogged by self-interested political calculations — New Yorkers will have your back. Mr. Mayor, don’t let Gotham be the Democratic Party’s patsy.

Behind the Crimea-bridge strike, no ‘ableism’ in Fetterman q’s