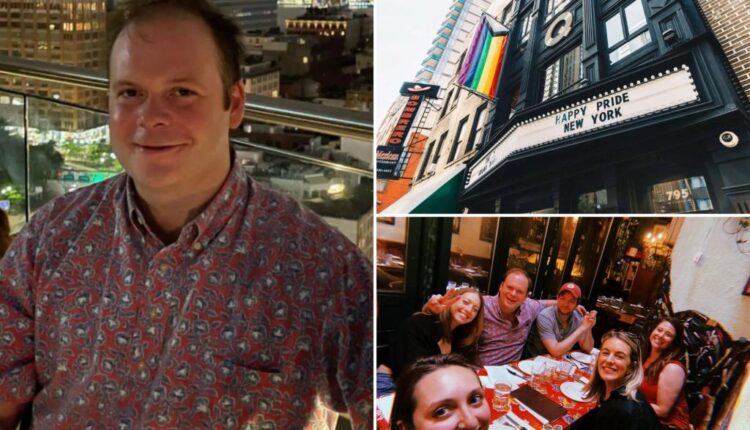 A gang that preys on gay men at Hell’s Kitchen nightclubs is suspected of killing at least two victims and of drugging and robbing more than a dozen other men — but Manhattan District Attorney Alvin Bragg’s office is impeding the investigation, law enforcement sources say.

An NYPD homicide investigation into the serial killings has expanded to include robberies with the unexplained deaths of two well-heeled young men, who were attacked in near identical circumstances five weeks and two blocks apart last spring.

Their phones were missing when their bodies were found, and their bank accounts had been emptied of tens of thousands of dollars. Each victim was last seen with three unidentified men in the hours before they died.

Five months later, New Yorkers still have not been warned that the predatory gang is on the loose.

But the mother of one victim has decided to break her silence to protect other young men from suffering the same fate as her son, John Umberger, 33, a Washington, DC, political consultant, who disappeared after a night out in May while visiting New York for work.

“I can’t be quiet anymore,” Linda Clary told The Post.

“Word needs to get out, especially in the gay community, that they are targeting gay men. . . . This same group of killers have drugged, robbed and murdered countless young gay men in New York.”

Her son last used his credit card at around 3 a.m. on Saturday, May 28, at The Q NYC, a multi-story gay nightclub at 795 Eighth Ave., where he had gone alone after a late dinner with friends at Tao Downtown in Chelsea.

He ordered and canceled a cab at 3:15 a.m. and was last seen about an hour later on a surveillance camera with three unidentified men in a car outside the Upper East Side townhouse where he was staying. The footage from a nearby building shows Umberger getting out of the car with two of the men who entered the townhouse with him but left without him after about 45 minutes.

Between 5:19 a.m. and 5:37 a.m., someone responded to six text messages on Umberger’s phone, but Clary believes it was not her son. At 9:18 a.m., Umberger’s phone stopped sharing its location with his younger sister and two brothers. A text message sent by Clary to her son at 8:24 p.m. was marked as “read,” so she thought he was safe.

“I thought John was reading my texts but was too busy and ignoring me. You let a day go by, a day go by and then you say this is weird.”

Her son’s body was found four days later, on June 1, in a fifth-floor apartment of a townhouse at 34 E. 61st St., which is owned by conservative lawyer Jay Sekulow’s American Center for Law and Justice, where Umberger was director of diplomacy and political programs.

His cellphone was missing, and his credit cards had been stolen from his wallet. More than $25,000 had been transferred out of his accounts through cash apps on his phone such as Venmo and PayPal, by changing the passwords, says his mom. There also was a failed attempt to empty his Charles Schwab trust fund account.

His credit cards later were used to buy booze at a liquor store near a homeless shelter and items at a Foot Locker.

He was found dead in the back of a taxi an hour later, on the Lower East Side. His phone and wallet were missing, and his bank accounts had been emptied of about $20,000. Like Umberger, his money was cleaned out by his tech-savvy killers via apps such as Venmo and Zelle; his credit cards were maxed out on expensive dinners and spa services.

Earlier that night Ramirez and a friend had visited two other Hell’s Kitchen gay bars within a half-mile of The Q NYC and the Ritz: Mickey Spillane’s and Rise Bar, both on Ninth Avenue.

Preliminary toxicology reports show both Umberger and Ramirez died of drug overdoses, but evidence suggests they had been “roofied,” the colloquial term for someone spiking their drinks with date-rape drugs, sources say.

“We need to stop this,” says Clary, who believes the gang has killed other young men and will continue to prey on New York’s gay community.

She has nothing but praise for the detectives investigating Umberger’s death, who she says have worked hard to identify suspects, but she accuses the District Attorney’s Office of “refusing to prosecute my son’s killers.”

“New York is unnecessarily unsafe, and it breaks my heart because John was so excited to be in Manhattan. He loved being there,” she said, paying tribute to her late eldest child. “He was a little ray of sunshine.”

Clary has come to New York from her home in Atlanta to demand action for her son and the other victims.

Over the weekend she recorded a video message for the Save Our State group urging a vote for Republican Rep. Lee Zeldin in Tuesday’s gubernatorial election: “Lee Zeldin has promised to restore safety to New York and to fire District Attorney Alvin Bragg on day one. This election may be the last opportunity to hold my son’s killers accountable.”

An NYPD spokesperson did not answer The Post’s questions about the serial killings of gay men, other than to say: “The investigations remain ongoing, [and] the Medical Examiner will determine the causes of death.”

A five-month delay in toxicology reports may be a death sentence for future potential victims, but it’s commonplace at medical examiner’s offices, which have been hit by staffing shortages, an overload of cases due to COVID-19, an increased homicide rate and a spike in fentanyl overdoses due to the open southern border.

Thus, the breakdown in law and order in New York — thanks to disastrous polices of Democrats at the federal, state and local level — has ramifications throughout the criminal justice system that go well beyond policing.

Prosecutors in Bragg’s office, for instance, appear to be paralyzed — whether from overwork or ideology, it’s unclear. But since his woke Day One memo in January ordering staff to stop seeking prison sentences and downgrade felony charges in various cases, he has been hit by an unprecedented number of resignations of assistant district attorneys.

Zeldin will have his work cut out for him to fix this mess, but at least he knows what the problem is, unlike Gov. Hochul who still is in denial that we are facing a crime emergency.

In that she is aided by a compliant media, including Bravo TV star Andy Cohen who endorsed Hochul Saturday, ironically enough, at a Stonewall event to try and rally LGBTQ turnout.

Not a mention of the menace stalking New York’s gay ­community.