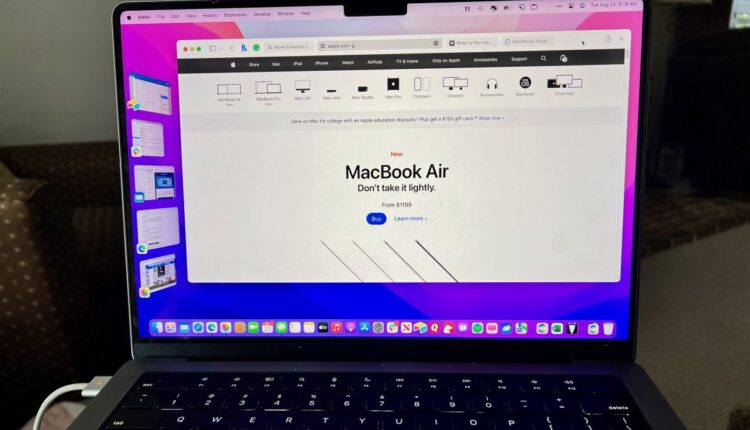 It wasn’t that long ago when the Mac product line looked old, tired, and out of sync with iOS and iPadOS. Two years ago, however, things began to change significantly on both the Mac hardware and software front. That was when Apple started rapidly replacing Intel-based Macs with new models using in-house chips. That year also saw the arrival of the most significant macOS software update since Mac OS X came on the scene over 20 years ago: macOS 11 Big Sur.

A year later, Apple introduced macOS 12 Monterey, a minor, well-received update that lacked the pizzazz of its predecessor. A new macOS version has now risen, macOS 13 Ventura. Ventura is a mostly good update that’s weighed down by one unfortunate design change and a previously announced feature missing in action.

I’ve used Ventura since it was first announced in June. Between then and now, the update has been installed on my everyday MacBook Pro, so I’ve grown familiar with its many pros and cons. Here are the biggest highlights.

Despite what Apple marketers attempt to note online (opens in new tab), there aren’t a lot of new features built into Ventura, which makes sense when you consider this is the 19th version of macOS (or Mac OS X/OS X as it was once known). Despite the low change count, the new features bring a lot to the table. Unfortunately, one of the most publicized new Ventura features has yet to make its public debut, which gives the update an unfinished feel, which it is.

Strangely, there has never been an official Weather app on macOS or iPadOS, but that odd omission is no more on both Ventura and iPadOS 16. Surprisingly, the new Weather apps on both operating systems resemble the Weather app on iPhone. That app was significantly updated with iOS 15 as it incorporated many of the features of the Dark Sky app, which Apple had acquired.

Regardless of the device, the Weather app features all the information you need to get an accurate forecast for any location on the planet, starting with your current one. On Mac, this includes presenting a beautifully arranged 10-day forecast, air quality alert, current precipitation, feels-like temperature, UV index, sunrise/sunset, and much more.

On a typical day, the Weather app shows a bright background during the day and a moony glow at night. Add a thunder and lightning storm or snow emergency, and the app’s biggest strengths come into view. You can receive government-issued severe weather alerts, next-hour precipitation notifications, and more during these times. During these events, the app’s background is in constant motion showing real-time conditions that pop.

If there’s one thing wrong with the Weather app in Ventura, it’s the lack of customization tools. Beyond deciding which alerts to get (or not), there’s not much you can do here to change the look. For example, you can’t choose which information shows in the app, as it’s all or nothing.

When clicked in previous macOS versions, the Weather widget opened the Weather.com website in Safari. In Ventura, that same click now opens the Weather app, as it should.

Ventura has also picked up a new Clock app. Once again, it should look familiar. The new Clock app is nearly identical to the one found on iPhone and iPad and includes four tabs, World Clock, Alarm, Stopwatch, and Timer.

Cameras found on MacBooks have never been extraordinary, although Apple made some positive changes beginning with the 2021 MacBook Pro models and, later, the MacBook Air (2022). Despite this, the cameras still aren’t nearly as good as those on iPhones. Apple’s admitting this in the open by introducing the new Continuity Camera feature. The feature lets you use your iPhone as your MacBook’s webcam for the first time. In doing so, all of the features that make the iPhone camera system special (Center Stage, Portrait model, Studio Light, and more) come to Mac.

You’ll need to purchase a third-party tool like Belkin’s new MagSafe iPhone Mount to position your handset as your webcam. Assuming your iPhone and Mac are on the same network (and use the same Apple ID), the handset is automatically selected as the webcam each time you activate a video app on the computer. When this occurs, you’ll see an alert on the iPhone that also includes a screen button that lets you switch back to the internal camera as needed.

I enjoy using my iPhone 14 Pro (and all its camera goodies) as the webcam on my 2021 MacBook Pro. And yet, knowing MacBooks are expensive, it’s unfortunate you need to use another Apple product to get a better camera experience on your computer.

And then there’s Stage Manager, the latest in a series of features Apple has added to Mac over the years to make windows organization easier. Although it’s not perfect, Stage Manager is much more helpful than desktop Stacks, which launched with macOS Mojave in 2018, and it’s easier to use than Spaces, which arrived with Mac OS X Leopard in 2007.

With Stage Manager on Mac (it’s on by default), your active app gets positioned in the center of your Mac screen, while other apps you’re using appear as thumbnails on the left side of the screen. You can switch between windows simply by clicking on a thumbnail or access items on your desktop by clicking on the desktop.

Stage Manager is most useful when you create a window group, which allows multiple apps to show on the desktop simultaneously. A window group is ideally suited when you’re doing something that requires dragging items (like images or documents) from one app to another.

There’s a learning curve associated with Stage Manager, and I hope Apple finds a way to make it easier to use in a future macOS release. An excellent place to start would be to add some right-click functionality to the thumbnails that would add clarity to window groups or the moving between apps.

Stage Manager does make the Mac experience better and more fluid. No doubt, however, many will turn it off, which you can do from the Ventura Control Center, never to see it again. That would be a shame.

Another new feature Apple highlighted during its first Ventura demo in June is Freeform. At its basic level, the Freeform app acts as a collaborative digital whiteboard where you can draw and embed objects like images, videos, PDFs, and more.

Unfortunately, Freeform hasn’t yet been released for Mac and will arrive in future updates for macOS 13 Ventura, iOS 16, and iPadOS for Mac, iPhone, and iPad, respectively. Although I consider Freeform a “best new feature,” it remains a work in progress, so stay tuned.

With software, what was once revolutionary eventually becomes stale and needs tweaking. With macOS 13 Ventura, Apple made many changes to existing features and tools. I have a few favorites:

Handoff in FaceTime: Apple made some incredible changes to FaceTime last year with the introduction of SharePlay. Things are even better with the tool in Ventura, iOS 16, and iPadOS 16. You can now start a FaceTime conversation on one device and move to another, and vice versa if you choose. Better still, if you’re using a Bluetooth headset, it also moves from one device to the next.

For example, I can create a Shared Photo Library for my parents, brother, nephew, and daughter. Once a person accepts membership, they have equal permissions to edit, delete, or add content. Captions, keywords, and favorites are also shared.

You can bring over existing photos/videos to your iCloud Shared Photo Library, snap new ones, or take advantage of “smart suggestions” to add content. You can also have photos automatically shared that match a start date or have certain people in the images.

All this sounds terrific and works as advertised. And yet, because iCloud Photos already offers sharing compatibilities, its entry might seem confusing to the average Mac user. And like Stage Manager, it might never get used by many.

I usually like seeing iPadOS designs make their way to macOS. In the case of System Settings, however, it feels like a move too far.

Power Mac users (like myself) will probably be the most affected by the new System Settings app, which takes some getting used to, as some options have moved to new locations. Everyday Mac users, who probably don’t go into settings all that often, will probably like the new look, which seems more welcoming and easier to use.

Edit and unsend in Messages and Mail: Have you ever sent an embarrassing iMessage or email that contains typos or incorrect information? In Ventura, those snafus are less likely to happen. In Messages, you can edit or unsend messages up to 15 minutes after sending them. In the Mail app, there’s a way to undo an email for 2 minutes after sending it.

The Mail app also includes the ability to schedule messages for delivery later and a follow-up feature. You can also (finally) add rich links and get a reminder when you forget to add an attachment or a recipient.

Exclusive Apple silicon features: If you have an Intel-based Mac that supports Ventura, you won’t be getting all of the update’s new features. On a good note, however, there are fewer Apple silicon exclusives in Ventura than in Monterey.

The biggest exclusive is Live Captions, which can turn audio into text in real time. The accessibility feature makes it easier to follow along with conversations and media across various devices. Live Captions also works with FaceTime.

After 19 versions, Apple probably found it challenging to create macOS 13 Ventura. However, the latest update for Macs offers a comfortable mix of new and updated features. The Stage Manager feature probably got the most attention during the beta period. Many will love the new feature, although I’m convinced others will turn it off and never worry about it again. With updated tools, Handoff with FaceTime is my favorite, followed by Apple’s changes to the Mail app.

On a more negative note, although I like how it was executed, Continuity Camera proves how poor Mac cameras are compared to those on iPhone. Additionally, I question whether the new iCloud Shared Photo Library will find broad adoption as it sounds like a feature we’ve all been using for many years. It’s also unfortunate Ventura remains an unfinished product because Freeform isn’t yet here.

I’m also not thrilled to see System Preferences between System Settings, but I understand the reasoning behind it.

If you haven’t yet done so, you can update your computer to macOS 13 Ventura anytime. It’s the same operating system now shipping on newer Macs.

It’s time to buckle down