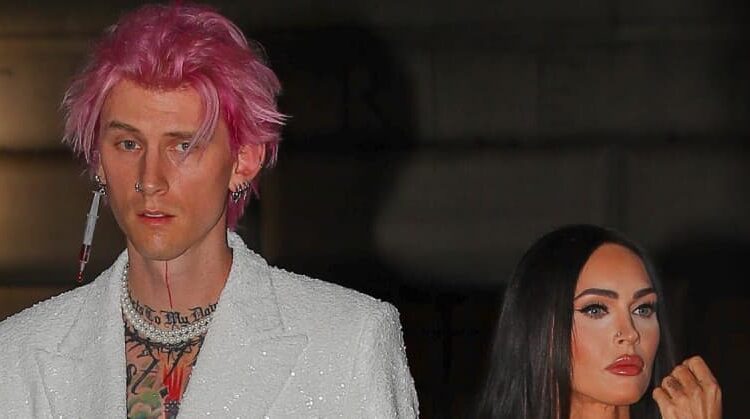 In character! Machine Gun Kelly and Megan Fox dressed up as Tommy Lee and Pamela Anderson for Halloween, and the singer took things to the next level when he was seeing snorting “cocaine” — presumed to be fake — off his fiancée’s chest.

“happy Halloween virgins 👼🏼,” he captioned the video of consuming the white powder through a dollar bill.

Of course, people loved the snapshots. One person wrote, “Oh my God dude you made me laugh so freaking hard😂,” while another said, “Hahha this is next level.”

However, some of the rocker’s followers were upset he put it on his Instagram page.

“Ok but this? Hell na, might ur music be good but the drugs? not that much,” one person said.

“I cannot keep defending y’all wtf is this😭,” commented another, while a third user stated, “Not cool with the snorting and having teens idol you.”

The couple, who got engaged in January, continued to stir the pot, as they faced backlash from Christians after the “Bloody Valentine” singer, 32, dressed up as a priest for the holiday.

In the snap, the musical artist wore a long, black robe, while the actress, 36, wore a black latex top and matching bottoms with fishnets and black boots. “On Sundays we take communion 🙏🏻📿,” the brunette beauty captioned some photos via Instagram.

Naturally, fans were yet again not pleased with the pair.

One person fumed, “What the hell is wrong with you people?” while another said, “Unacceptable. No one should ever mock someone else’s religion.”

A third person shared, “Why is it that all you celebs mock Christianity? What’s the agenda? And why do yall hate God so much? I guess the devil is real.”

In late October, the duo attended an event together, shutting down rumors they were going through a rough patch.

“Megan and MGK haven’t set a date yet but they’re secretly planning their wedding,” an insider shared. “They’re working on it and also working hard on themselves.”

“It’s still a struggle at times and they tend to have a lot of ups and downs,” the insider continued.