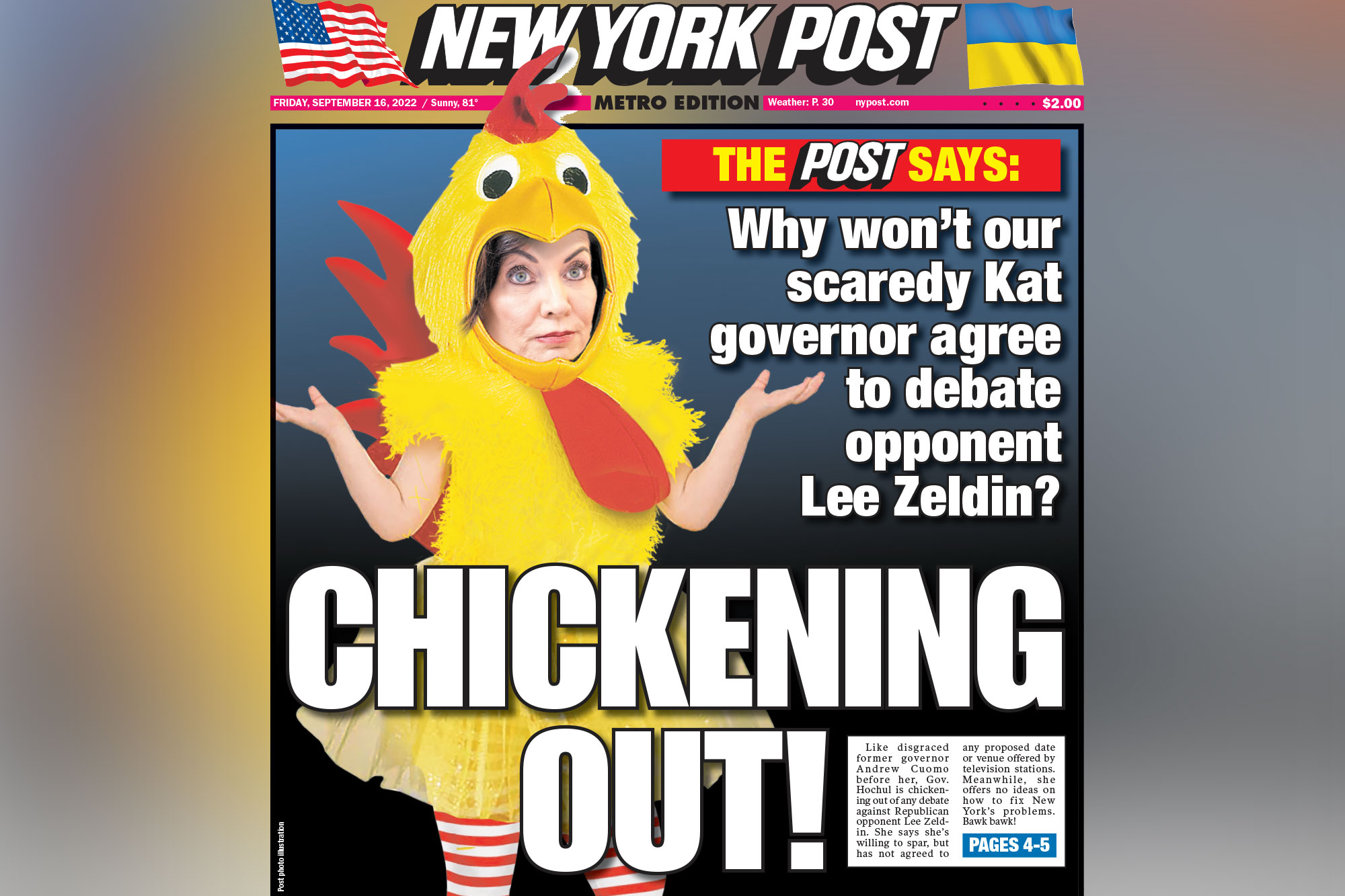 The Issue: Gov. Hochul’s refusal to commit to dates to debate with her opponent, Rep. Lee Zeldin.

The people of New York deserve to hear debates between Rep. Lee Zeldin and Gov. Hochul (“Chickening out,” Sept. 16).

What is the governor afraid of? Maybe it’s because she offers no plan to curb the violence that is destroying our great state or for dealing with the homeless people who clog the streets.

Maybe it is because of her support for congestion pricing, which will cause prices to rise across Manhattan for all the delivery trucks bringing in our already-expensive groceries.

When you’re leading in the polls, I guess you don’t want to take the chance of looking like you’re not fit or qualified for the job.

Stop being a chicken, Hochul. The citizens of New York deserve to hear from you.

Hochul won’t debate Zeldin for one simple reason: She doesn’t have to.

No matter the results of any debate, all the fools of New York will vote her in anyway. She knows this.

Mindless New Yorkers will vote the party line as always and cry about it later, blaming everyone except the real people at fault — themselves.

Proof of this is the bang-up job Mayor Adams is doing. It’s no different with her. New York will never be what it once was until people vote by policy, not party.

The fact that the non-elected Hochul has shown nothing but hesitance on debating Zeldin is indicative of a candidate who is insecure and incapable of substantiating her political stances on so many critical issues.

As residents of New York, we deserve to be well-informed about the political initiatives of all gubernatorial candidates. Her unwillingness to engage in a debate is downright negligent and a colossal disservice to all New Yorkers.

She has done nothing to address the calamitous no-bail law and now she is bailing on an opportunity to explain her support for a law that has been so injuriously detrimental to so many people in this once-great state.

The Post is correct: She should be labeled chicken-hearted for lacking the fortitude to be forthcoming.

Hochul isn’t stupid. If she debated Zeldin, she’d be forced to answer questions. Why deal with questions when you can just buy TV commercials talking about your opponent’s support for former President Donald Trump? What a truly pathetic platform.

Could she possibly defend anything that she has done since being anointed governor? Like her brethren in DC and the rest of the socialist left, they cannot run on accomplishments, because they have none that help taxpaying American citizens.

Unfortunately, New York is a one-party state, and she can do whatever she wants because she will be re-elected. It’s really a shame, because New York deserves better.

What is our interim governor Hochul so afraid of?

I say “interim governor” because she was not elected governor. She is just a fill-in for a disgraced former governor.

She is worried that she will get crushed in the debates. Our city and state are regressing back to the old days, and she is not doing anything to stop it.

She refuses to address the problems with bail reform, which is one of the issues ruining our city and state.

I can only hope that the Democrats who vote in November are not blind and wake up.

Is there any question why Hochul is ducking Zeldin on debating?

She’s a horrible governor who hasn’t done one good thing since she took over for former Gov. Andrew Cuomo.

She is clearly in way over her head and hopes that just the fact that she is a Democrat will carry her over the finish line in deep-blue New York.

If she gets elected, then the people of New York deserve what they get — a corrupt, feckless, incompetent fake of a governor. And they will have to suffer under her for four more dismal years.

Putin has no options left as Ukraine counteroffensive reveals atrocities

How ‘social justice’ is corrupting science