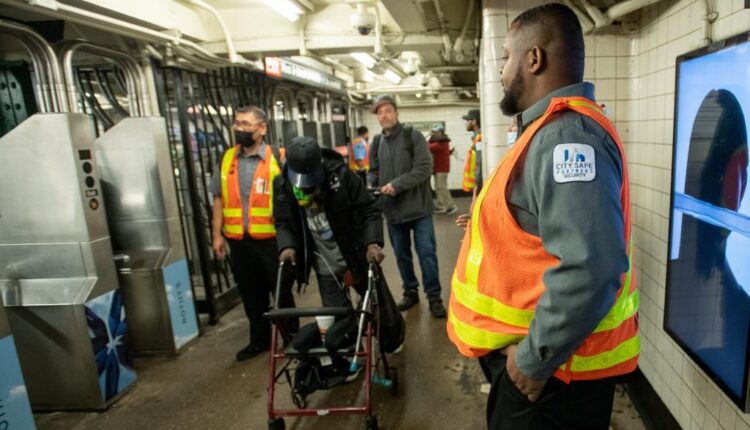 The Issue: The MTA’s decision to hire private unarmed security guards to patrol the subways.

The MTA has found another way to waste taxpayers’ money by hiring turnstile guards (“MetroGUARD,” Oct. 28).

What exactly are they going to do to stop fare beaters? They cannot arrest anyone and likely won’t physically stop anybody because of liability. What happens to the guards if/when they get shot, stabbed or beaten?

These criminals have no respect for police or any authority figure because they know there are no consequences.

Thanks again to the no-bail policy. Just more wasteful spending.

The idea of protecting transit station entry is excellent. But not by private guard services.

The MTA needs to establish a new safety division within its organizational structure, just like school safety. Properly done, it can recruit people and have them designated special patrolman by the NYPD. They would be armed and wear uniforms that depict them as MTA security.

The focus would be to deploy them to turnstile entrances with the highest rate of fare-beating. The chief of safety can be selected from a plethora of recently retired NYPD executives.

Why is the MTA wasting millions on window-dressing guards who will do nothing?

The mayor should put “violence interruptors” to the subway. They did such a good job reducing violence. It was money well spent. (Wink, wink.)

How fast they forget. The MTA CEO has now decided to put unarmed security guards in the subway stations to prevent turnstile jumping and to discourage the criminals from coming into the subway system.

It seems the CEO of the MTA has memory problems. Just a short while ago, two police officers tried that, and they were assaulted by the person they stopped for jumping the turnstile and got into a fight of their life. Thank god they managed to fight their way out of it.

This was caused by all this liberal crime reform.

The Issue: An attack on House Speaker Nancy Pelosi’s husband, Paul Pelosi, in their home in California.

I hope he makes a full recovery, but what will be in the headlines is that the attacker was a MAGA supporter. Because all the Democrats keep doing is focusing on Trump, not working to keep Americans safe.

Fix the crime problem, fix the economy and get homeless off the streets.

Regardless of whether one likes Nancy Pelosi, the attack on her husband was deplorable.

Clearly the man was troubled. He seems to have swallowed, hook line and sinker, the conspiracy theories right-wing politicians love to spout, including the one about the 2020 election being stolen, as baselessly and basely propounded by former President Donald Trump.

A democracy cannot survive when beset by political violence and incendiary lies are spread virally to a population that has many people on edge, who can act on a demagogue’s hate.

Temperate speech from both political parties and the media would go a long way toward putting out the partisan fires that are now burning all over.

Hillary Clinton goes to bat for her clone, Kathy Hochul