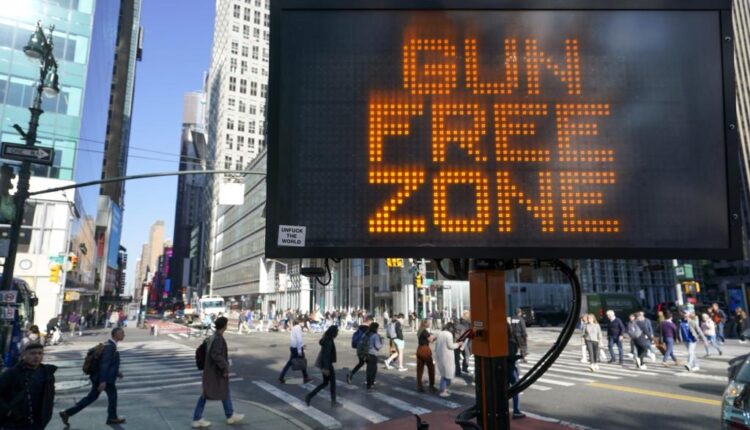 The Issue: Mayor Adams’ signing of a bill that makes concealed carry of a firearm in Times Square illegal.

Can someone tell me exactly how many people have been shot by legal gun owners in Times Square — or New York City, for that matter?

So will all those gun-toting deviants now be willing to drop off their guns at some gun-depository stand before seeking entrance to Times Square?

I suppose that Fordham Road in the Bronx, Queens Boulevard in Queens, Eastern Parkway in Brooklyn and Park Avenue in Manhattan will remain wide open, so all the gun-carriers out there will have an alternative to Times Square — or you can still go to Times Square, but only with a machete.

If this gutless gesture weren’t so pitiful, it would be laughable. I can’t understand how a former law-enforcement officer can be on board with such tomfoolery.

You can pass all the laws you want about “gun control” — gun-carry permits, buying guns, etc. It will do nothing to bring down shootings and killings of young and old innocent people. You think gang-bangers give a crap about gun laws?

The only way to curtail all these shootings and killings is to make it so that when you are caught with an illegal gun, you go directly to jail. If convicted, you should get a long sentence.

All these other gun laws that they want to pass are a political farce.

Here’s a prediction: I see ever more crime on subways and shootings under your watch. Somebody please save that once-great metropolis from the hands of these careless fools.

I can see criminals licking their chops at this one now. Stupid is as stupid does, but unfortunately the city will again vote left and get what it deserves.

The Issue: Rep. Tulsi Gabbard’s announcement that she is leaving the Democratic Party.

As someone who has always been a split-ticket voter, I have been watching former Rep. Tulsi Gabbard of late and found her to be such a sensible Democrat — a rarity these days (“Gabbard dumps ‘elitist’ Dems,” Oct. 12).

When I heard she had enough and left the Democratic Party, it only seemed to show just how far leftward the Democrats have moved in recent years.

On a number of current public policy issues, I disagree with her. She came across as a centrist Democrat, but there is obviously no room in the party for those who haven’t drunk the Kool-Aid of the woke mentality.

As a center-right voter, it was easy for me to switch party affiliations from Democrat to unenrolled. I didn’t leave the Democratic Party, it left me.

I have seen a few political moments in my life, and Tulsi’s announcement is up there with the most impactful.

Very few people are willing to confront the establishment that way — fully, completely and critically.

I may disagree with Tulsi on any number of topics, but I do know we could sit down and discuss them openly and constructively and likely wind up with an outcome that is imperfect from our individual perspectives but brings us closer to “a more perfect Union.” I thank her for practicing that which has made the United States great.