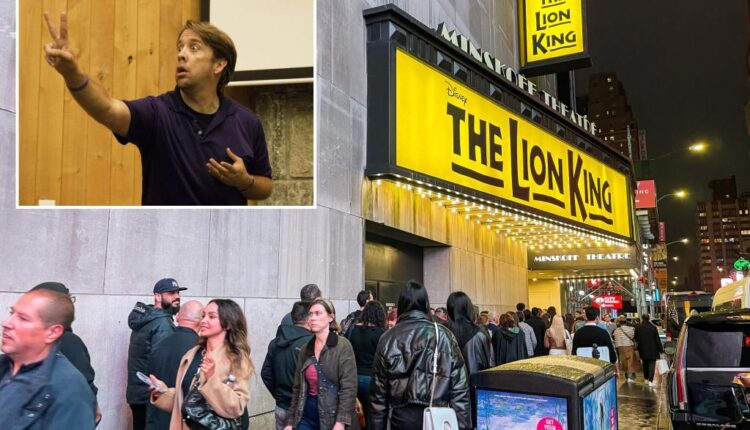 The Issue: A sign language interpreter who claims he was fired from “The Lion King” because of his race.

Bravo to The Post for taking a stand against the Theatre Development Fund for the most biased firing (“Cowardly ‘Lion,’ ” Nov. 13).

Are people no longer hired on merit and qualification?

Poor Elton John and Tim Rice, who wrote this wonderful score. Since they are English and white, they will they be deemed inappropriate writers and be replaced. And what about Julie Taymor? Will her magical parade of the animals be eliminated? Her color is certainly well-known.

Shame on the Theatre Development Fund. It is indeed a cowardly group.

Do liberals ever get tired of extending the boundaries of hypocrisy?

So now a man is reportedly being fired from the Broadway show “The Lion King” because he’s white. Does this mean people of color can’t appear in Shakespeare plays because they are set in Europe?

This comes on the heels of Vice President Harris saying that people of color should have first priority in getting relief aid after Hurricane Ian.

If memory serves me, wasn’t there a man who said he wanted his children judged by the content of their character, and not the color of their skin? Isn’t there a national holiday to honor his memory?

If hypocrisy were a sport, there would be no shortage of liberals with gold medals.

It won’t come to pass, but all good people of all shades of skin color should boycott “The Lion King” until the Theatre Development Fund rehires sign-language interpreter Keith Wann.

Until then, the misguided nonprofit should post a sign outside the theater stating: “Whites need not apply.”

The silence from the left and mainstream media concerning the firing of the ASL signer from “The Lion King” due to his skin color is thunderous.

Where is the outrage from the Broadway community? Where are the protesters from all the social-justice groups? Does it not matter that this individual is being deprived of a livelihood because of his ethnicity?

Perhaps all the actors should be asked to resign, as they are not lions.

In the ’60s, Americans marched with Martin Luther King, Jr. against racial inequality, and rightfully so.

Fast forward, and the woke left is now discriminating based on race as a signer for the Broadway show “The Lion King” has been fired, supposedly because he is white.

It’s time for all Americans to boycott Disney, and all that the company owns. Racism is racism, against any color.

The group claims only an African-American interpreter is appropriate for this play.

Skin color should never be used in the hiring or firing of employees. The same holds true for ethnicity, age, sex, sexual orientation, religious or political beliefs.

Could only Jews appear in “Fiddler on the Roof”? Mormons in “The Book of Mormon”? Or Italians in “The Godfather”?

The late civil-rights icon Martin Luther King, Jr. would have never approved of discrimination based on race.

Apparently you can’t have white ASL specialists interpreting the black actors portraying a colorful array of African animals because of the “current social climate.”

This is one climate that needs changing! Can we please get back to that beautiful “content of their characters” thing?

If one were to use the convoluted “logic” of the Theatre Development Fund, why would any white person go to see “The Lion King”? How ridiculous.