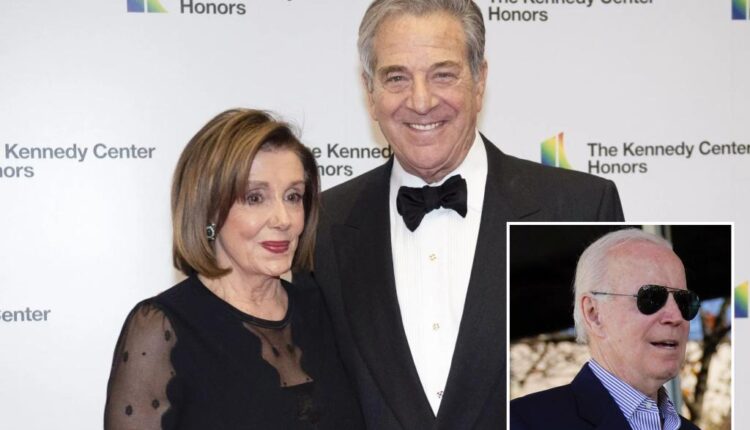 The Issue: Democratic leaders blaming Republicans for the attack on Paul Pelosi in his home in California.

In the weeks before the attempted stabbing of Rep. Lee Zeldin, Gov. Hochul portrayed him as “dangerous and extreme” in her campaign ads (“Twisted Dem spin after Pelosi scare,” Miranda Devine, Oct. 31).

No one on the left blamed her for inspiring the attack. She even had the nerve to ask why addressing crime mattered so much to him during their debate. Compare this to the eagerness the left has shown in blaming the right for the attack on Paul Pelosi.

Whether over the assaults on Rep. Steve Scalise and Sen. Rand Paul or the assassination attempt on Supreme Court Justice Brett Kavanaugh, the left never called on anyone to temper their angry, divisive rhetoric.

Never ones to wait for full disclosure, the usual suspects jumped the gun and accused MAGA Republicans of the assault on Paul Pelosi.

There are lots of questions to be answered here, but let’s not wait for the full investigation.

Hillary Clinton, Vice President Kamala Harris and President Biden all weighed in, hoping to score points before the midterms.

These three should just keep their traps shut, but they can’t. Another example of Democrats acting like fools.

Oh, the irony: In the wake of a brutal attack on Paul Pelosi, Dems are stating we must turn down the rhetoric — after years of calling conservatives “bitter clingers,” fascists, racists, far-right radicals and threats to democracy.

President Biden will stop at nothing in his attempts to bring down the legacy of President Donald Trump.

Even before the police completed their investigation of the assault on Paul Pelosi, Biden, along with his VP and election-denier Hilary Clinton, were quick to blame Trump and the Jan. 6 protests for the attack.

On the other hand, Biden and his ship of fools stuck their heads in the ground after Maxine Waters’ hateful rants encouraged her followers to threaten and harass Republican leaders.

America’s only hope is that the midterm elections result in a Republican-led Congress.

The assault on Paul Pelosi, as horrific and inexcusable as it was, is no different than being sucker-punched on the street, hit in the head with a brick by a homeless person or being thrown on the tracks in a subway station.

I hope that black and Latino voters in California (and across America) are watching how the authorities are handling this assailant of a prominent Democratic politician’s family member.

I can assure you that he will not be released back into the neighborhood, as he would be in your community, to victimize someone else.

Remember that next Tuesday before you blindly vote Democratic.

Miranda Devine and Michael Goodwin are right on target with what’s going on in America.

When you have a president who openly accuses half the population of being fascists, we have a huge problem.

How they all, including former President Barack Obama, are spinning Pelosi’s attack to blame Trump and conservatives is just criminal. Democrats have been spewing hate via the media to stay in power.

Americans, wake up: Fight for this great country and vote for what is right for us all.

Sadly, the chickens have come home to roost here. When you are soft on crime, we will all suffer greatly.

I hope that Nancy Pelosi and her Democratic colleagues take note here that their destructive policies are hurting everyone, including those close to them.

A nation that releases unrehabilitated and untreated (for mental illness) criminals far too easily back into society only emboldens them to keep committing more crimes. This creates more chaos and suffering for us all in an ever-worsening spiral of violence.

Jerry Lee Lewis, the end of a line of early rock greats, is no longer the last man standing