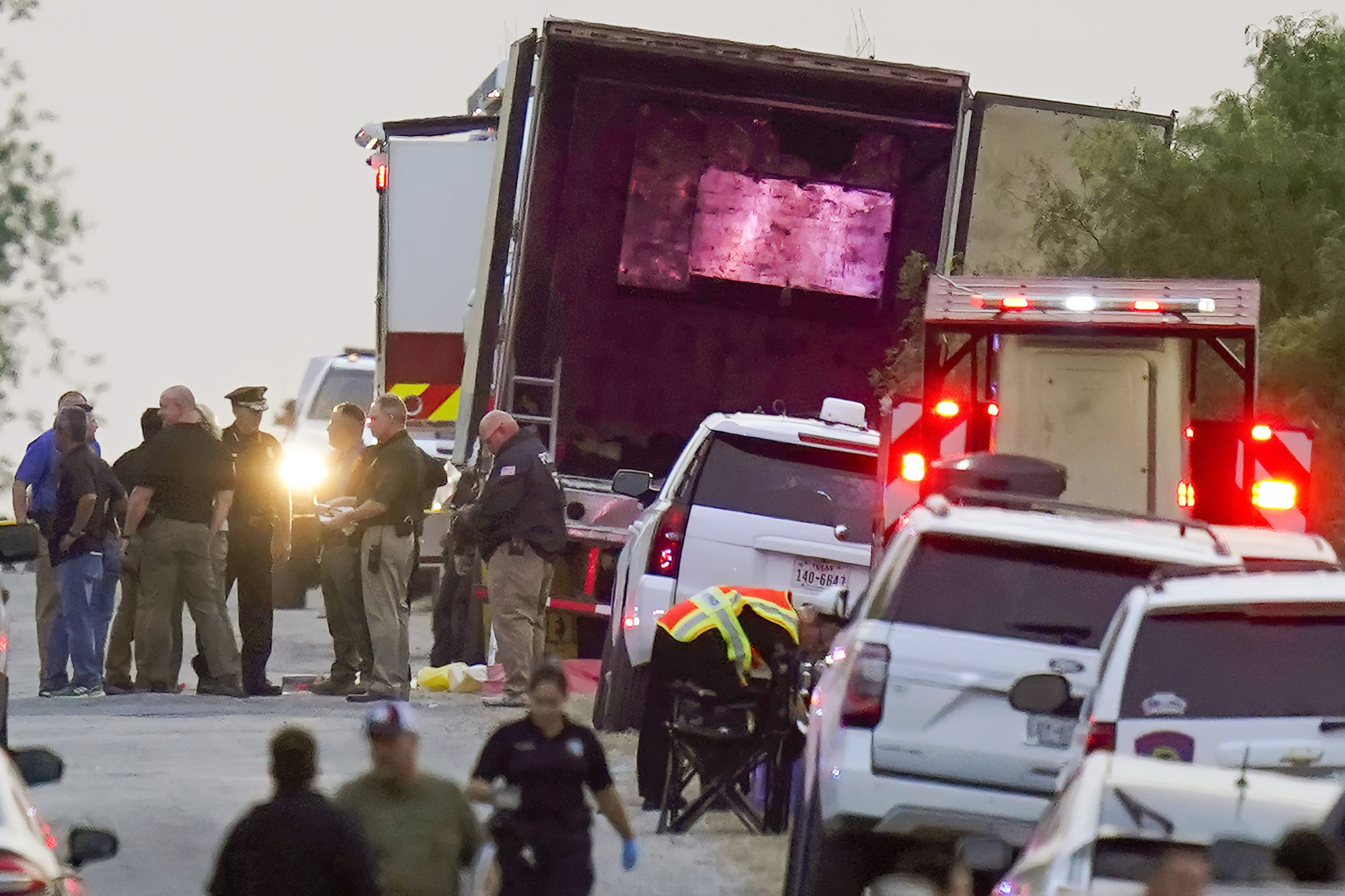 The Issue: A group of 53 migrants who suffocated while being smuggled in the back of a tractor-trailer.

The Trump administration succeeded in securing our southern border through a combination of increased security and common-sense policies, which stabilized the swell of illegal immigrants (“Blood on Biden’s Hands,” Editorial, June 29).

Since his first day in office, Biden has done everything in his power to dismantle those efforts, and the result has been chaos and death. His capitulation to a small but vocal wing in his party has been a disgrace.

The terrible loss of life of illegal immigrants being smuggled in that truck in Texas dwarfs the number of people killed by maniacs in Buffalo and Uvalde, yet this time there are far fewer cries for immediate action.

In response to the shootings, gun grabbers passed useless, unconstitutional laws limiting our freedoms in a matter of hours. Where are the rushed laws, rammed through without debate, to protect our sovereignty?

These 53 people never would have died if the United States had a functioning, protected southern border. As you said in your editorial pages after the shooting incidents: Do something.

Through the countless comments online, one sees how often migrants (and even refugees) are callously criticized with presumptions they’ll become permanent burdens on their new host/home nation.

But that no longer matters when the migrants die in their attempt at achieving sanctuary, be it “economic” or actual life-saving refuge.

Critics often overlook the fact that many migrants are leaving global-warming-related chronic crop failures in the southern hemisphere widely believed to be related to the northern hemisphere’s chronic fossil-fuel burning.

Tragically, it’s as though some people, however precious their souls, can be perceived and treated by a large swath of a relatively civilized society as disposable, which means by extension their suffering is somehow less worthy of concern.

Biden shares the blame with Vice President Kamala Harris for the 53 migrant deaths due to their open border and inviting messaging.

Add these deaths to the hundreds who have perished traveling to the border. Sadly, Biden, the vice president and Democrats don’t care.

More border blood on the hands of the president.

Some 53 unvetted, undocumented migrants have died in an unventilated semi-truck. They came here at the invitation of the president of the United States.

The drug cartel smugglers make billions off illegal immigrants attempting (and succeeding) to come over the border.

Fentanyl is coming over our once-sovereign border — killing more than 100,000 of our innocent youth in 2021.

The Department of Homeland Security is a dangerous joke. If we have no border, we have no country.

Fifty-three migrants died while being smuggled in the back of a trailer. It’s not the first time this has happened.

Let’s not forget that these migrants are coming into this country illegally, yet the Biden administration always responds “nothing to see here” and is aided by the media in that denial. The border is closed, Biden tells us.

Sadly, this is not the last tragedy we will see, and it’s only a matter of time until one of the known terrorists who crosses into this country causes a national terror event.

When Trump was president, Rep. Alexandria Ocasio-Cortez went to the border and cried for the cameras at the “kids in cages.”

Her tears are nowhere to be seen when 53 smuggled illegal immigrants smother to death in 100-plus degrees in a container truck.

Sinking consumer confidence is on the money about US economy