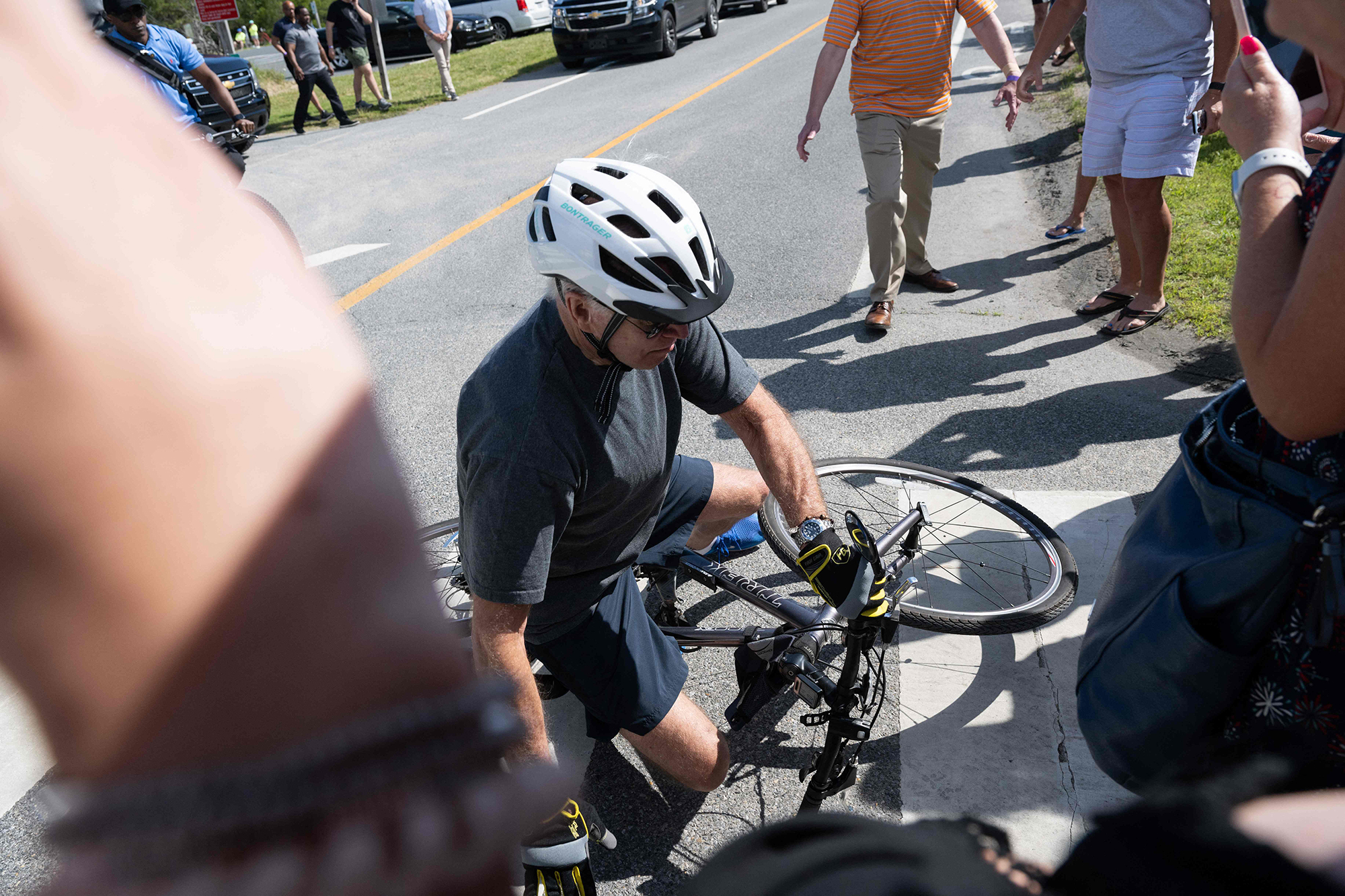 The Issue: President Biden’s fall while dismounting his bike after a ride on Saturday.

It’s great that Grandpa Biden is riding his bike, but I believe he does so in order to show America and the world that he is in better shape health-wise in order to change the narrative that he is failing both physically and mentally (“Down goes Joe,” June 19). It’s a political game that he’s has been playing for over 40 years.

Then he fell. It’s great that he’s OK, but just wait and see: At his first chance to talk to the press, he will probably blame either former President Donald Trump or Russian President Vladimir Putin or both for his fall. That’s his character. He never, ever takes any blame.

Now that President Biden is unable to find a balance when coming to a halt, will all-electric training wheels become mandated as de rigueur for the nation’s bicycles?

And how much longer can we be expected to follow someone who is no longer able to navigate a flight of steps or a bike path? Surely, not until 2024. It’s time we put our foot down.

Biden just fell off his bike on a weekend ride.

I think by now in Biden’s presidency, the voters are beginning to think like Biden’s bike: Enough is enough, so get off our backs and let us return to a smooth ride in life.

I’m not a fan of Biden and his wrecking-ball policies that are all but destroying America, but his bicycle spill should make all aware of how fragile his health has become.

Yes, falling off a bike has happened to almost all, but Joe was in a stationary position. His walking gait is obviously somewhat comprised, and that could play a part in his stumbling as well.

I don’t think excuses about bike pedals are sufficient enough in making a diagnosis about Joe’s physical health.

I can hardly think of anything more pathetic than the US president with his wife and entourage going on a bike ride in the hope of showing the president’s health. It ended up being just ridiculous.

I was happy to hear that Biden was unhurt when he fell off his bike.

I only wish I could say the same for my investments during his administration.

The Issue: The Post’s endorsement of Republican Rep. Lee Zeldin for governor of New York.

I’ve been reading The Post for 50 years, and I’m neither a Democrat nor a Republican.

As a former member of law enforcement, I’ve never been more disappointed with New York state’s Parole Board.

I am grateful that Zeldin, on Day 1 as governor, will fire Manhattan District Attorney Alvin Bragg.

I’ve seen too many of my friends leave New York because of high crime, and it is time for voters to bring sanity back to Albany this fall, as you stated in your editorial.

In your editorial, you said: “We don’t agree with Zeldin on some issues.” Is gun safety one of those issues?

He boasted about his A-rating from the NRA. During a wave of soaring gun violence, do we really need a firearms fanatic as our next governor?

Why won’t Biden lift tariffs and other commentary

‘Lightyear’ brings a new twist to a classic character