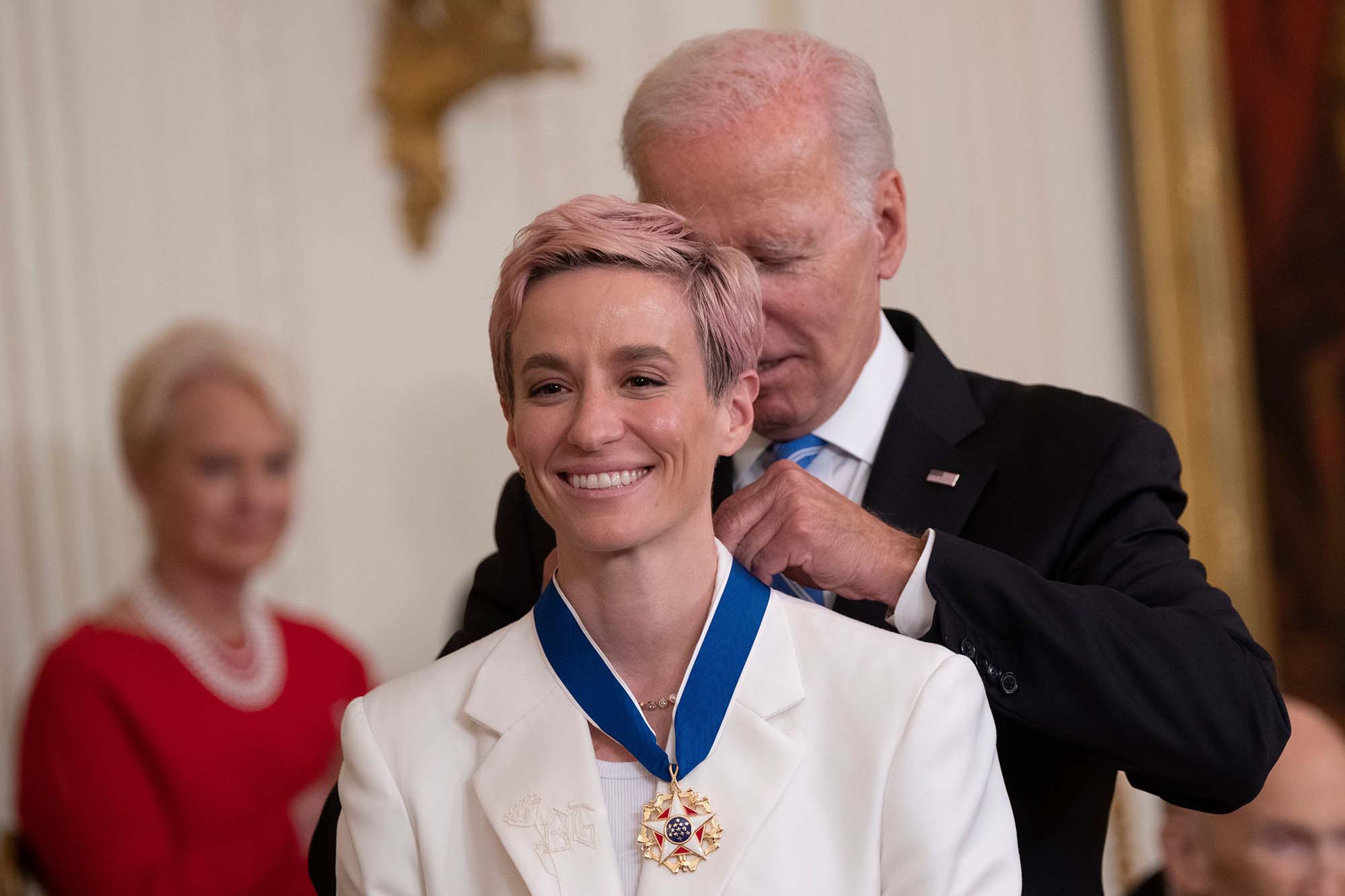 Phil Mushnick’s column “Peddle to the Medal” on Megan Rapinoe receiving the presidential Medal of Freedom succinctly explained the ineptitude and cluelessness of the current administration and the White House staff (Sports, July 8).

Rapinoe’s behavior and public appearances absolutely have not displayed “exemplary contributions” that benefit the United States and/or its values or security.

She is not a shining example of good sportsmanship for women or men. This just solidifies the fact that Biden is interested only in photo ops and special-interest groups to try to save his presidency.

Apparently President Biden & Co. will give the Medal of Freedom to anyone these days, including Megan Rapinoe — the classless, obnoxious, selfish soccer player who took a knee during the national anthem.

Rapinoe even had some Americans rooting against the US team because of her self-aggrandizement. Yet our president awarded her the highest civilian honor.

This is another embarrassment tolerated by us true Americans.

Anyone paying attention to what is going on in this country right now must feel as I do. We have a president who thinks that “recession” and “inflation” are just a couple of words.

Giving the Medal of Freedom to Rapinoe is an added slap in the face to every American. Disgusting is the only word I can think of.

Biden awarding the Medal of Freedom to Megan Rapinoe is an insult to every great American who received it in the past.

She is an anti-American who has disgraced the women’s Olympic team and deserves to be condemned, not rewarded. Who receives the medal next? Jane Fonda? Maybe a posthumous award to Benedict Arnold?

The Issue: A 73-year-old man who died after he was beaten by a group of teens in Philadelphia.

Civility toward one another in this country disappeared a long time ago (“Philly killers,” July 10).

There are people in our society who now feel that the rules no longer apply to them, and they can do and take whatever they please.

How else can you explain someone pushing around a 61-year-old bodega employee over a bag of potato chips or teenage boys murdering an elderly man with a traffic cone?

It is no coincidence that this entitlement seems to have worsened since the Democrats started supporting “defund the police” and the progressives controlling the party decided that sound law enforcement is racist.

This dysfunction is occurring in Democrat-controlled cities all over the country, and the victims are the very people whom Democrats say their policies are helping.

But there’s no hiding the fact that the carnage is happening on their watch, and that they have failed miserably. That will be their legacy in 2022 and 2024.

The left is trying hard to disarm the public, but only the law-abiding citizens.

Meanwhile, thugs and gangsters run rampant in our streets, murdering at will. They attack with impunity. Killers attacked a helpless old man in Philly.

Woke district attorneys are hurting our society at the direction of the Democrats and those on the left. Why is the left trying to destroy America?