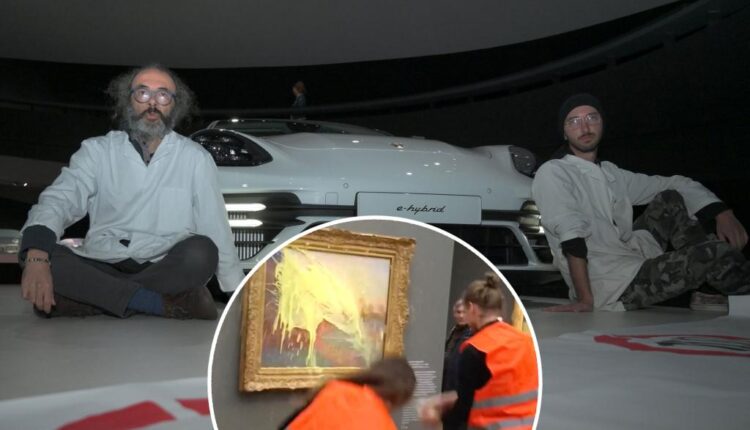 Dumping milk onto floors. Hurling food onto walls. Refusing to eat. Gluing body parts. Threatening to pee and poop in your pants. Are those the behaviors of a toddler? Yes. But they’re also the dominant tactics of today’s climate activists.

Consider the case of Gianluca Grimalda. On Oct. 19, Grimalda, along with 15 other members of a climate activist group called Scientist Rebellion, glued himself to the floor of the visitors center next to a Volkswagen factory in Germany.

Although the VW security guards brought pizza to all the activist scientists, Grimalda, an economist who has published work in prestigious publications including the Proceedings of the National Academies of Science, felt disrespected. He declared a hunger strike and went on Twitter to express his outrage.

“VW told us that they supported our right to protest,” he complained in a since-deleted tweet, “but they refused our request to provide us with a bowl to urinate and defecate in a decent manner while we are glued, and have turned off the heating.”

On Twitter, many pointed out the highly childish nature of his demands. “I’m a serious scientist protesting against fossil fuels,” wrote one user. “Now turn the gas heating on and bring me my potty.”

The activists claim such childish tactics are necessary. On Sunday, after climate activists in Germany threw mashed potatoes on a Monet painting, they screamed at the nearby museum-goers: “We won’t be able to feed our families in 2050” because of climate change.

Grimalda tweeted that he and his colleagues are protesting “until our demands to decarbonise the German transport sector are met.” But Volkswagen already agreed last year to end the sale of vehicles with internal combustion engines by 2035.

In the not-so-distant past, left-wing protesters employed tactics that were dignified, silent and noble. Think of Rosa Parks’ arrest in 1955 after she refused to give up her seat on a bus for a white person, and the 1930 Salt March led by Gandhi, where nearly 60,000 people were arrested after hiking 240 miles. Civil rights activists in the 1950s sat at lunch counters and demanded to be treated like fully grown adults. Then, it was racist counter-protesters who poured milkshakes over them. Today, it’s the protesters spilling milk and throwing food.

Obviously, these shock tactics are a surefire way to attract media attention. But there’s another reason activists have regressed in their methods.

The infantilization of the climate change movement reflects a broader infantilization of the culture. It’s not just that we take longer to become adults, it’s also that adults are retaining more childlike characteristics. Grown-ups are even looking to children for leadership. They chose Greta Thunberg as the face of the climate movement, after all.

Today, people in the West have many more opportunities to stay rooted in adolescence, either by returning to school, or living with their parents for longer than they did in the past, scholars note.

The growing number of life choices is disorienting to some people and makes it harder, not easier, for them to decide how to live their lives. “As a result,” write researchers, “young people tend to become escapist and delay important decisions.”

People who refuse to grow up are bogged down with feelings of inadequacy and neuroticism, say psychologists, constantly worrying about making the wrong choices, leading them into depression, anger and addiction.

The coddling of children also leads them to become narcissistic, concerned only for themselves, and leading them to claim to be victims when life gets hard. One-third of those born between 1980 and 1986 complain that they were rushed into independence too early, even though they had the slowest introduction into adulthood of any generation in recorded history.

Sam Vankin, an Israeli psychologist and expert on narcissism, says a growing body of research finds that woke advocacy is fundamentally about using victimhood as a tactic. “What we are beginning to find is certain people are prone to adopt victimhood as an identity. They would seek to be victims even in situations where they would not have been victimized otherwise.”

Vankin says these people are in reality highly aggressive. They “are actually very narcissistic and grandiose, extremely aggressive, lacking in empathy, and yet they claim that they have been victimized all their lives because they are super empathic, sensitive and so and so forth.” These were the exact claims that Thunberg and her parents have made about her childhood.

Researcher Ginger Coy added, “If a person laments that they are a victim, in this narcissistic age, it should be a red flag that they are likely a perpetrator.”

Such is the case with climate activists. They are some of the richest and most privileged people in the world, thanks to cheap and abundant fossil fuels. Some of them, like the heirs and heiresses to the Getty Oil and Rockefeller Oil fortunes, are more direct beneficiaries than others. And yet they are actively seeking to deprive others of those very fuels by financing the radical activism of the “Just Stop Oil” campaigners.

Given that the young vandals are being rewarded by the media and wealthy benefactors for their behavior, we should not expect them to stop. VW executives should not have brought pizza to the protesters. Rather, they should have had the activists arrested and removed immediately.

Governments will increasingly have the support of their citizens to crack down on these destructive, childish protests — and if they won’t act, the public will. In Italy last week, angry drivers dragged eco protesters off the road after they halted traffic on a busy thoroughfare in Rome.

The police and courts must be called upon to do their job so the vigilantes don’t. It is up to civil society to demand adult consequences for infantile behaviors.

Michael Shellenberger is the author of “Apocalypse Never: Why Environmental Alarmism Hurts Us All” and a Time Magazine “Hero of the Environment.”