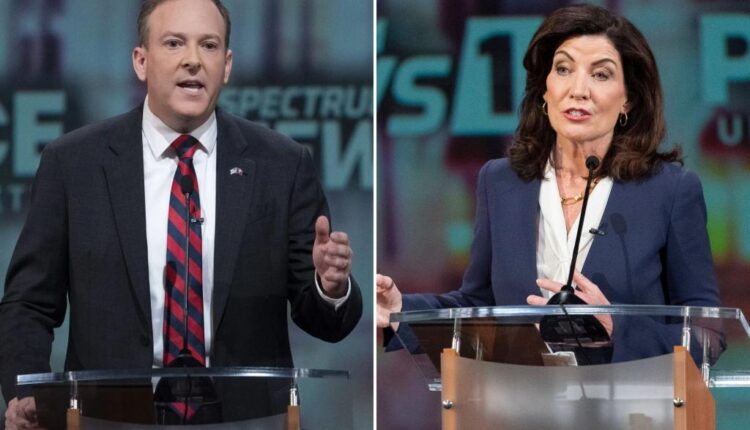 If Gov. Hochul was going to give him only one debate, Rep. Lee Zeldin wasn’t going to waste a second making nice. The Republican challenger brought the fight and focus that he has displayed on the campaign trail and scored a decisive victory Tuesday night.

This wasn’t a knockout, but a victory on points because he made specific and realistic promises to improve life in New York. Hochul, meanwhile, mostly played defense.

Even when she played it well, she never really laid out a vision of what four more years would like and how they would be different from now.

In an election where voters all across the spectrum demand big changes, any hint that you are satisfied with the status quo is a loser, and that’s why she failed.

The debate was lively from the start, with Zeldin looking over-caffeinated and Hochul nervous. The moderators did a good job of peppering them with substantive questions and controlling the clock.

Although one hour in one showdown was not nearly enough to give voters a complete picture, those who watched the limited broadcast saw a fair microcosm of the campaign.

Zeldin did Tuesday what he has done for months — doggedly fault the incumbent and offer big plans for big reforms, especially on matters of crime, taxes, energy policy and spending cuts. He also was effective in hitting her on the outrageous pay-to-play pattern that is undeniable.

By contrast, Hochul has barely campaigned, foolishly taking victory for granted because of her party label, and her rust was apparent. She also had agreed to only a single debate in the primary and, as she did then, came stuffed with packaged comeback lines but few promises.

Her fall-back position was never to miss an opportunity to mention abortion and Donald Trump, as if that would be enough to give her a full term of her own.

In an ordinary year, that might be the case. But it’s a sign of how volatile American politics are that the top job in New York is even in play for the first time in 20 years, and she is misjudging the public mood by playing it safe. In fact, she spent the summer and most of the fall in refusing to leave the Rose Garden, an inexplicable mistake. In what looks like a red wave year, her inert strategy has helped turn the race into what polls say is a toss up.

Even if Hochul holds on to her job, the mistake she made by hiding from the campaign trail will come back to bite her. As I have reported, she has told donors she wouldn’t make big promises on crime and other hot-button issues during the race but would be an activist governor on those subjects after the election.

This is amateurish nonsense because an election without an agenda is an election without a mandate. For that very reason, the far-left Legislature would be delighted to tell her no, hell no on real reforms, so there is zero reason to believe Hochul would be able to do things she hasn’t done already, especially when she was afraid even to talk about them during the campaign.

The result of a Hochul victory would nullify New Yorkers’ desire for a radical course correction. High crime, high taxes, bad schools, expensive congestion pricing — get used to them because they would be here to stay, and actually make the state and city worse.

Cures for all the ailments driving people to the exits will die on the doorstep if Hochul prevails. Because in word and deed, she has made it crystal clear that, for her, the status quo is good enough.

That’s what’s on the ballot. Either New York gets an energetic governor dedicated to ending its long decline and making the state a destination for residents and businesses, or it gets a go-along, get-along captive of those who have brought it to the current state of disaster.