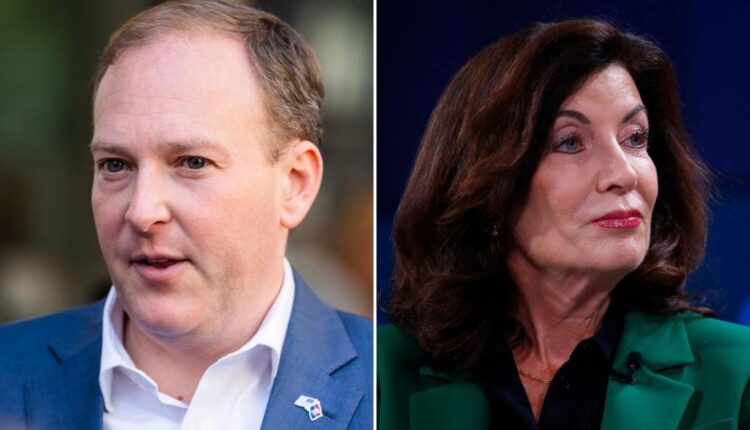 In politics, as in sports, underdogs are often the most interesting people. Modest except in ambition, they take nothing for granted while daring to dream that anything is possible.

Lee Zeldin is one of those people. Until recently, he was relatively unknown outside his Long Island congressional district, but he’s now on the cusp of playing David to Gov. Hochul’s Goliath.

A series of surveys in recent weeks has showed the race tightening, and a big jolt came Tuesday when the Quinnipiac poll put him behind by just four points.

Now there can be no doubt — the race is a toss-up.

It’s a stunning development in a state where registered Democrats outnumber registered Republicans by 2-1 and no GOP candidate has won a statewide race in two decades. But independents favor Zeldin by 20 points, the poll finds, and it shows him getting 37% support in the city, double what recent GOP statewide candidates got.

As he and others have noted, a Republican has no chance of winning the state with less than 30% in the five boroughs.

If the numbers in the Q poll are right, and if Zeldin can hold the city support and add to his leads in the suburbs and upstate, he will pull off a remarkable upset.

One arrow in his quiver among suburban voters is that he opposes expensive congestion pricing in the city, which Hochul supports. It would take effect next year.

So the trend is his friend, and Zeldin knows it.

“We have the momentum and we have the right issues,” he told me Tuesday. “We also have a clear sense of purpose.”

He describes that purpose succinctly: “To save our state,” and adds: “I have been busting my tail every day to save New York while Kathy Hochul is trying to save herself by crawling across the finish line.”

He’s not alone in questioning Hochul’s approach, which is best described as an extreme version of a Rose Garden strategy. Extreme as in she has hardly campaigned, limiting her public appearances mostly to government ribbon cuttings and bland speeches.

It’s the kind of strategy often employed by incumbents in good times. But these are far from good times for many New Yorkers, so even some pollsters are baffled about what she’s thinking.

“I have no idea, it makes zero sense,” one said.

It’s not that the governor doesn’t have a clear agenda — it’s that she doesn’t have an agenda at all, at least one she’s told voters about. She’s keeping to herself any plan for what she would do if elected to a full term after taking office when the disgraced Andrew Cuomo resigned. Nor does she have a roster of surrogates who speak for her.

What she does have is an enormous pile of cash — $48 million at one point — but even that is cutting both ways. It’s funding her relentless television ad campaign, which consists almost exclusively of attacks against Zeldin over his pro-life stance and ties to the Dems’ uber-villain, Donald Trump.

On the flip side, many of the biggest donors to Hochul have business before the state. Some have gotten sweetheart contracts that smack of a corrupt pay-to-play schemes and, even if legal, stick taxpayers with enormous bills.

One effect of Hochul’s schedule of government-related appearances is that she can’t really ask voters to support her. Another is that Zeldin is setting the parameters of the campaign, and his focus on the turn-’em-loose bail laws and other criminal-coddling measures crafted by Hochul and Dem lawmakers is striking a chord around the state and putting her on defense.

That’s because the surge of bloodshed in Gotham is being repeated, and in some cases exceeded, in Rochester, Buffalo and other urban areas. And the suburbs are not exempt, as Zeldin learned firsthand when two teens were wounded in a drive-by shooting in front of his house. His twin teenage daughters were home at the time.

The polls suggest Hochul is paying a price for her nothing-to-see-here, business-as-usual approach in terms of an enthusiasm gap. Indeed, that gap is making it possible for a scrappy, underdog Republican to put himself in a position to make history.

Zeldin has come a long way from the smirks of the chattering class when he first launched his quest for governor. The smart set doubted he would even win the party’s primary, and if he did, he would certainly be the fifth consecutive Republican to lose the general election in a landslide. None of the previous four got over 40% of the vote.

But something important has happened on the way to Hochul’s expected coronation. More and more, voters are waking up to the fact that one-party Democratic rule in Albany has been a complete disaster.

Soaring crime, inflation and taxes are all products of misrule and, along with a sclerotic bureaucracy, combine to create a declining quality of life that is relentlessly expensive and increasingly dangerous. Many people are responding by stampeding for the exits and others are doing something almost as dramatic — preparing to support a Republican.

For once, the deep blue Empire State is following the national trend rather than bucking it.

That pattern is giving Zeldin an extra boost of confidence. If there is any semblance of a national red wave, he believes it could mean as many as half of New York’s 26 congressional districts go red, up from seven now.

As the top of the ticket, he would certainly benefit from big turnouts in down-ballot races. Already, he says, granular polling from some of those winnable districts has been “excellent news” for his campaign.

One potential negative for Zeldin is his position on abortion, and he aims to counter Hochul’s advantage by trying to take the issue off the table. After the Supreme Court overruled Roe v. Wade, he said that “the abortion law in New York . . . codified far more than Roe and when we woke up the day after the decision, the law in New York was exactly the same as it was the day before. Nothing changed, and I’m not going to change it.”

He recently repeated similar words and that hands-off position in a TV ad. He told me the feedback has been “very positive.”

He also believes Hochul, following the national Dem playbook, is getting minimal returns for calling him “extreme” and a Trump flunky.

As if on cue, a Hochul campaign email landed in my inbox that repeated the Dems’ buzzwords in a single sentence, saying cash was needed to “take-on our far-right opponent and fight back against his MAGA Republican allies.”

“Voters are getting numb to those words,” Zeldin said. “Democrats need to find some new words.”

Whether there will be debates remains an unsettled question. From the start, he asked for as many as five in different regions while Hochul, like many front-runners, saw nothing to gain by giving her opponent a big stage and so danced around the question for weeks before finally agreeing to a single one next Tuesday.

Zeldin rejected that, insisting on a commitment to multiple joint encounters. So far, neither has budged.

One thing to watch for is any change in Hochul’s position. If she suddenly finds the urge to debate more than once, it will show she knows she has to come out of hiding if she has any hopes keeping her job.