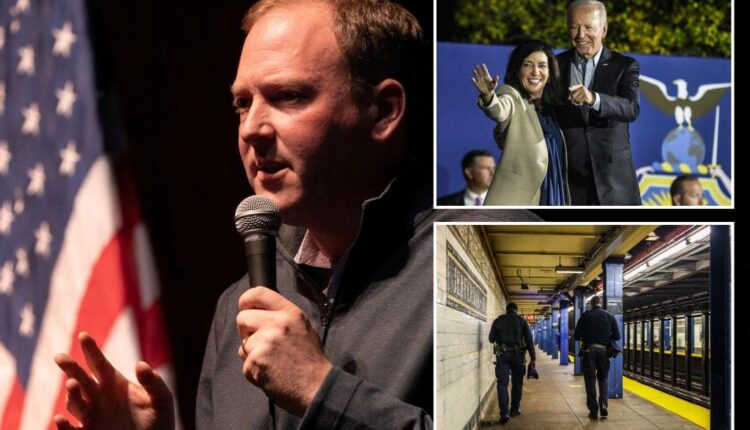 Lee Zeldin — congressman, lieutenant colonel, husband and father — does not need a master strategy to win Tuesday’s race for governor. He doesn’t need a celebrity endorsement, an “October surprise,” a rabbit’s foot or a rain dance.

You, the face staring at these words right now, the brain digesting the knowledge that your vote may finally count for something, may finally lead to changes in our lives for the better, once and for all.

My fellow New Yorkers, I am writing this piece to let you know it is your votes that will ensure Lee Zeldin becomes the 58th governor of our once-great state.

You have read The Post for months now, maybe years, and time and again its pages are filled with the frequent ­fulfillment of our worst fears. The crime, the corruption, the skyrocketing cost of living and, above all, the incompetent and reckless stewardship of our state government. The unchecked power of the Democratic Party has eroded our quality of life and transformed the Empire State into the Vampire State, sucking the lifeblood from its citizens and forcing countless numbers of our friends and coworkers to flee for greener pastures.

Tuesday is the one opportunity you have left to say, “Enough is enough!”; to say no; nyet; no más; non; laa; bù shì or nahin. It’s time to tell Kathy Hochul that New Yorkers have been pushed around by the far-left woke mob for too long.

The race is tightening. Recent polls show a massive shift of momentum toward not just Zeldin but a broad slate of moderate Republican candidates across the state.

Victory is within reach, and yet victory, in and of itself, is not the end goal for Lee. He wants to save our state, restore balance to our government and deliver safe communities where everyone can thrive. That will not happen unless you act.

If you are reading this in a bodega, waiting for your breakfast, concerned about the crime that has recently plagued your neighborhood, know that it has been Gov. Hochul and the Democrats who have long prioritized the well-being of criminals over the safety of the decent people you know. Vote to change that.

If you are sitting in your taxi or Uber, the vehicle whose daily miles put food on your table, concerned about how Hochul’s congestion pricing charge will harm your family, you must vote for Lee Zeldin to stop it.

The Metropolitan Transportation Authority wastes $30 million building a staircase while allowing farebeaters to roam free on trains and buses, and yet Gov. Hochul thinks your bank account should be the one to pay for the agency’s waste and mismanagement. Say “No” on Tuesday.

If you’re reading this on the subway, glancing occasionally over the top of the page or your phone to keep an eye out for danger, fearful that you could be another victim of this year’s 42% rise in transit crime, while Democrats ignore your concerns and call you a conspiracy theorist for feeling anxiety, vote Tuesday!

No, I am not saying Lee Zeldin will end all crime; nor will he alleviate all your fears. But for once, wouldn’t it be nice to have a governor who acknowledges our problems and doesn’t bend to the pro-criminal left? Recall, the governor has signed woke laws like “Less Is More,” literally touting the idea that “less” jail time for hardened criminals is somehow “more” beneficial to society. Won’t it be a blessing to have common sense back in the governor’s mansion?

If you are reading this at home, wondering how you’ll pay this winter’s massive electric and gas bills, remember that only the Democratic Party has shut down our power plants, banned energy extraction and repeatedly added taxes and fees to our bills. What is “climate justice” anyway, when the harm falls on our poor and middle class? Vote Tuesday!

If your small business was shut down, your house of worship closed, your child kept out of school, your job taken away or you were just forced to follow irrational mandates while people sitting home in their pajamas snickered at you: Take your resentment to the polls.

If you’re worried about your children’s education or worried how you will continue to afford groceries in New York. You must vote.

If you have browsed the real-estate listings, plotting your family’s departure from New York for a better situation elsewhere, make Tuesday your final stand to save your home.

Lee Zeldin needs you to win and restore our state.

On Tuesday, march to your poll site or drive before they start charging $23 for the privilege, and do your duty in a once-in-a-lifetime election in which every vote will matter.

Joe Borelli is the minority leader of the New York City Council.