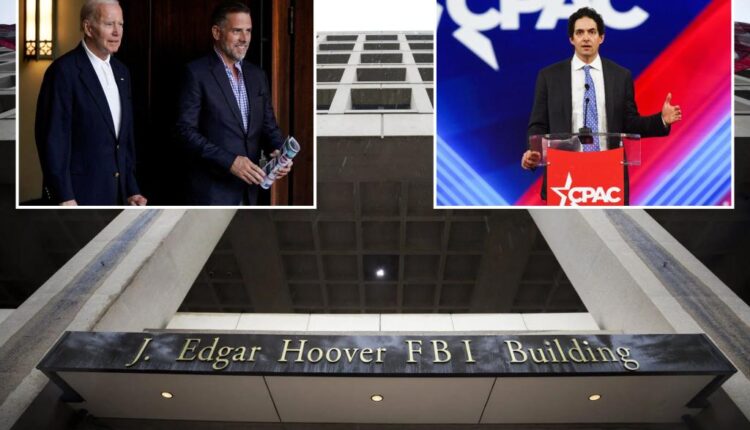 A little noticed federal lawsuit, Missouri v. Biden, is uncovering astonishing evidence of an entrenched censorship scheme cooked up between the federal government and Big Tech that would make Communist China proud.

So far, 67 officials or agencies — including the FBI — have been accused in the lawsuit of violating the First Amendment by pressuring Facebook, Twitter and Google to censor users for alleged misinformation or disinformation.

Victims of the Biden-Big Tech’s “censorship enterprise” include The Post, whose Hunter Biden laptop exposé was suppressed by Facebook and then Twitter in October 2020 after the FBI went to Facebook warning them with great specificity to watch out for a “dump” of Russian disinformation, pertaining to Joe Biden, with an uncanny resemblance to our stories.

“We allege that top-ranking Biden administration officials colluded with those social media companies to suppress speech about the Hunter Biden laptop story, the origins of COVID-19, the efficacy of masks, and election integrity,” is how the lawsuit was summarized by the intrepid Missouri Attorney General Eric Schmitt, who is leading the action.

Censorship related to alleged “misinformation” about pandemic lockdowns, vaccines and COVID-19, and included material from the esteemed infectious disease epidemiologists and public health scientists associated with the Great Barrington Declaration which proved over time to be correct and eventually much of which was adopted as official policy by the CDC.

Last month a federal judge ordered a reluctant Fauci and Jean-Pierre to hand over their records, so the case is progressing nicely.

This civil action by the Attorneys General of Missouri and Louisiana, in partnership with such red-pilled lawyers as Jenin Younes at the New Civil Liberties Alliance, overlaps with a separate lawsuit by former NYT reporter Alex Berenson, whose legal victories so far have forced Twitter to reinstate his account after he was banned (although the cat and mouse game continues as he is currently suspended again).

Berenson’s legal discovery unearthed internal Twitter documents and Slack conversations showing Biden administration officials instructed the social media company to de-platform him because he was dissenting from the official line on school lockdowns and the efficacy of vaccines.

He was viciously attacked for tweeting that schools should be opened: “people called me a ghoul a lot. [But] Twitter and Facebook prevented a real debate and discussion about the value of school closures . . . Is there anyone who though we did the right thing in fall of 2020 and 2021 by allowing teacher unions and Democrats to keep schools closed?”

His evidence-backed view that school lockdowns were being driven by teacher unions, not data, and would do long-term harm to children, has been proven correct. Similarly, his view was correct that vaccines were not stopping the transmission of COVID and thus mandates were pointless. Yet he was silenced, and no debate was allowed.

“Whether I’m right or wrong . . . you have to have an open discussion. The First Amendment protects even lies. That’s how it should be on these platforms. The efforts to regulate speech and call something disinformation is . . . demonizing folks and saying they’re un-American [for dissenting],” he said. “What I have is evidence that I was specifically targeted in private communications . . . because I was being an a–hole on Twitter.”

In a White House meeting in April 2021, Twitter representatives were asked “one really tough question about why Alex Berenson hasn’t been kicked off from the platform,” a Twitter employee wrote.

Slavitt, then with Biden’s COVID response team, complained specifically about Berenson, even though Twitter said he had broken no rules.

“They really wanted to know about Alex Berenson,” the Twitter employee wrote on Slack.

“Andy Slavitt suggested they had seen data [visualization] that had showed he was the epicenter of disinfo that radiated outwards to the persuadable public,” the employee wrote. “I’ve taken a pretty close look at his account, and I don’t think any of it’s violative.”
But over the next four months, as opposition to vaccine mandates grew, the Biden administration ratcheted up the pressure.

Berenson identifies as the final blow a public statement by Biden on July 16, 2021, that social media companies were “killing people” by encouraging vaccine hesitancy.

“A few hours after Biden’s comment, Twitter suspended my account for the first time. On August 28, 2021 . . . Twitter banned me — for a tweet that it has now acknowledged should not have led to my suspension,” he said. “My argument is that the White House turned these companies into extensions of the state. By putting explicit pressure on Twitter, they made it an extension of the state, whether willingly or not.

Last month the federal Fifth Circuit Court of Appeals ruled that Twitter and other social media platforms don’t have an unlimited right to discriminate against “speech they don’t like.”

“The Platforms are not newspapers. Their censorship is not speech,” the court said. “The First Amendment protects speech: it generally prevents the government from interfering with people’s speech.”

Berenson has another lawsuit on foot, against the Biden administration, vaccine manufacturer Pfizer, and Pfizer board member Scott Gottlieb, the former head of the FDA who was instrumental in getting him banned, as documents from his legal discovery show.

This month Berenson published on his substack an email Gottlieb wrote to Twitter in August 2021, complaining about his various tweets criticizing Fauci, and claiming, “This is why Tony needs a security detail.”

But nothing Berenson said about Fauci would create any need for extra security. He just called Fauci “arrogant,” a “skilled courtier” and mocked his claim that “attacks on me, quite frankly, are attacks on science.”

Berenson was hardly alone in criticizing Fauci. At least half the country felt the same way. In any case, he was entitled to voice his opinion, so he’s suing Gottlieb.

Gottlieb has not denied Berenson’s claims in his frequent TV appearances. Just this Sunday he was interviewed on CBS flagship program “Face The Nation,” to “break down the false claims being spread online about COVID vaccine mandates” for children.

But CBS never disclosed that Gottlieb is a member of Pfizer’s board, earning close to $400,000 for his trouble. That is more relevant than his past FDA employment. Of course, Pfizer is a big advertiser so maybe CBS didn’t want to draw attention to the fact that their favorite vaccine expert is compromised.

These lawsuits are the only obstacle between Americans and a frighteningly pervasive new federal censorship scheme on behalf of shadowy interests, using “disinformation” as a catchall excuse.

Schools Teach CRT, So Much for Jim Crow 2.0 and other commentary