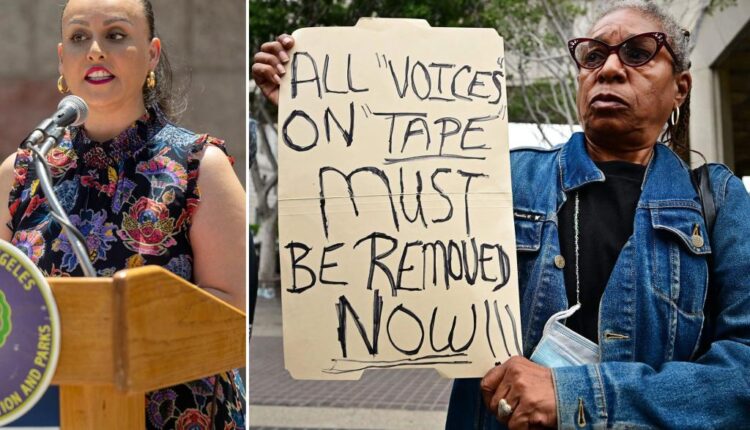 Progressive politicians want you to believe that their public position is also their private position and that their advocacy for fairness and equality among our diverse nation is pure and incorruptible.

However, when people look beyond their fantastical rhetoric and focus on the disastrous outcomes of putting these people in power, we start to see who they really are: identity-obsessed racists.

The conversation, led by Martinez, ranged from ridiculing City Council member Mike Bonin’s black son as “a little monkey” in Spanish for his behavior on a float and Bonin for “raising his son like he’s white” to insulting District Attorney George Gascón by saying “F–k that guy. He’s with the blacks.”

But the most telling portion of the audio recording was when they claimed that black constituents are very vocal with their issues but it gives a false impression of how many there are. They should remember that the majority are Hispanic, like themselves.

Under their progressive doctrine, their being Hispanic lands them in an impervious category as “people of color” who are supposedly incapable of racial malevolence — but this leak shows they’re as hateful and racially antagonistic as skinheads. Actually, they’re worse than skinheads because they have social credibility and remain in positions of governmental power to either inflict pain or ignore people’s concerns whenever they see fit based on what demographic they fit in.

Progressives see black people as their emotional-support animals whom they can publicly pet for personal comfort by claiming their lives matter but behind the scenes feed them nothing but garbage as they purposely mistreat them or at minimum, neglect them.

Nury Martinez and her council cohort are the perfect examples of how perverse progressives operate when they’re given political power. Progressive politicians will inevitably divide people into groups to either support their agenda because they are one of them or malign them because they are outsiders.

“F–k that guy. He’s with the blacks” encapsulates their collectivist mentality and every opponent of those council members should run that audio clip on a loop until people understand how mentally downtrodden these people are.

But I thought the progressive mantra was that they are all “with the blacks?” What happened to equitable treatment? For those council members, equitable treatment comes at a cost of political power and you can’t authentically support people you despise.

Politically, they’ll always place one faux empathetic arm around black people’s shoulders while the other possesses a dagger to stab them in the back with as they’ll claim that their bleeding is good for them.

Progressive politicians claim conservatives are these malevolent figures who are racially motivated, but much of this is projection. Progressives are society’s adulterers, claiming that everyone else is cheating to distract us from seeing their sins.

There is no purity in party politics, but there is something insidious about how progressives project racism onto conservatives while enacting policies that negatively affect minorities and choose to interact with racial minorities with an air of elitist condescension.

When they want to defund the police, as Nury Martinez advocated for, despite it being an unpopular policy position among black Americans, you now have your answer as to why they’re doing it: There aren’t enough black people who vote in their elections to truly give a damn. Black people’s safety is not nearly as important as their ideology, reelection bids and corporate lobbying dollars.

When you peek behind the curtain, this is how they speak with each other, and when given the opportunity to speak negatively about black Americans, they’ll always take it. This is exactly who they are.