Kudos to John Durham for exposing the truth of ‘Russiagate’ 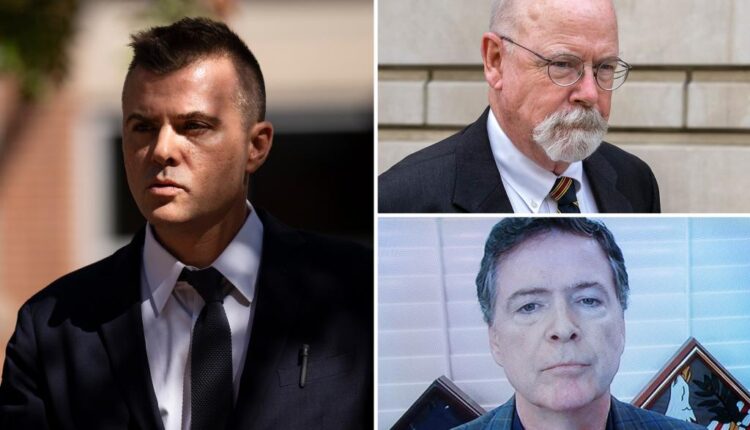 A prosecutor can be an agent of sunlight or an agent of cover-up. John Durham is letting the sun shine.

The Russiagate special prosecutor has taken on a tough case: indicting Igor Danchenko, the principal sub-source for the discredited “Steele dossier,” which was penned by former British spy Christopher Steele and commissioned by the Hillary Clinton campaign to smear her GOP rival, Donald Trump, as a Kremlin mole.

The peddling of a false narrative of Trump collusion with Russia was a product of the Clinton campaign and the FBI. Voluminous reports by the Justice Department’s inspector general have demonstrated that the bureau’s hierarchy was seized by anti-Trump animus. The FBI knowingly allowed itself to be fed partisan opposition research that was sensational, salacious, often flat-out ridiculous, but always — because it portrayed Trump as a traitorous lout — too good to check.

There was no shortage of nod-and-wink. The too-clever-by-half G-men, who like to project themselves as above politics as they meddle in election after election, feigned some distance between themselves and the Clinton campaign. Knowing DNC lawyer Michael Sussmann was attached at the hip to the Clinton campaign, the bureau let him pretend otherwise when he delivered bogus data advertised as proving a Trump-Kremlin communications back channel. Knowing Steele’s mission was to dig up dirt on Trump for the benefit of the Clinton campaign, the bureau indulged his “just a concerned former intelligence officer” pretensions.

For its part, the Clinton team purported to despise the FBI, blaming then-Director James Comey for improperly disclosing evidence of Hillary’s national-security recklessness in the emails scandal. Conveniently forgotten was that she was able to run only because Comey proclaimed that she shouldn’t be indicted.

Behind this public theater, Clinton operatives exploited their bureau contacts, and in hopes of nailing Trump, the FBI — with eyes wide open — allowed itself and its awesome investigative powers to be exploited.

The culmination of this collusive arrangement, one of the great political dirty tricks in American history, was the FBI peddling to the Foreign Intelligence Surveillance Court, under oath, the uncorroborated rumor, innuendo, and sheer fabrications of the Steele dossier. Not once, not twice, not thrice, but four separate times, over close to a year and for months into his presidency, agents depicted Trump as a clandestine agent of Moscow.

This is where Danchenko comes in. A cagey operator whom the FBI credibly suspected as a Russian asset a dozen years ago, he was the main source of “intelligence” — which is apparently Russian for “gossip among drinking buddies” — that Steele turned into the faux reports that comprised the dossier.

In his probe into the origins of the bureau’s Trump-Russia investigation (codenamed “Crossfire Hurricane”), Durham discovered that, although Danchenko acknowledged that the Steele dossier was farcical, he also appeared to have misled the FBI regarding his sources. In particular, he made up a conversation with Sergie Millian — a loose Trump associate whom Danchenko doesn’t know and never actually communicated with. The result was the dossier claim that Trump and the Kremlin were in a “conspiracy of cooperation.”

Durham charged Danchenko with four counts of lying about Millian (in addition to a count involving Danchenko’s alleged concealment of a second source, Clinton ally Charles Dolan, which the presiding trial judge dismissed due to vagueness on Friday at the close of the prosecution’s evidence). It is a tough case for Durham because it’s hard to expect a jury to convict someone for lying to the FBI about comparatively less serious matters when the FBI itself was blatantly and serially dishonest with a federal court — with apparent impunity.

That’s why Durham deserves our praise. Under the circumstances, he has a motive to soft-pedal the FBI’s misconduct, to try to keep the jury focused on the defendant who is actually charged in the case.

It was also Durham who proved that, even after the dossier debacle, the FBI signed Danchenko as a paid informant, lavishly paying him $200,000 over three years — with one agent unsuccessfully trying to get approval to pay him another $346,000 before the gravy train was finally derailed. Durham also proved that the agent who signed Danchenko as an informant falsely claimed to the bureau unit that monitors informants that there was no derogatory information about him. That is, the agent failed to check the bureau’s own records showing that the FBI had suspected Danchenko as a Russian asset. And that was only the most egregious of the rudimentary due-diligence failures to probe his background, motivations, and foreign government interactions.

Understandably, the more appalled the jury becomes over the FBI’s behavior, the less inclined it may be to convict Danchenko. So there is risk for Durham, who knows the media-Democrat complex is rooting against him.

I believe he’s more prudent than that, though. John Durham is experienced and honorable enough to know that his only chance of prevailing is to show the jury that he is uncovering government misconduct and incompetence, not concealing it. And he knows, no matter what the jury decides about Danchenko, the highest public interest is accountability for the unholy alliance between politics and law enforcement. Kudos to the special counsel for exposing it.