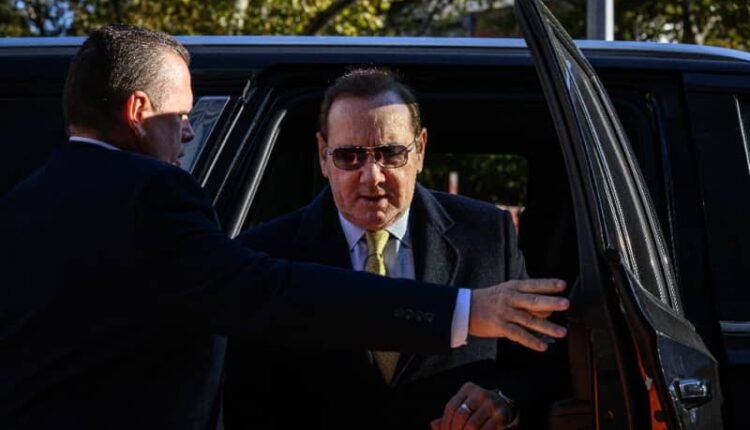 New York (AFP) – A New York court on Thursday dismissed a $40 million sexual misconduct lawsuit brought against Kevin Spacey by an actor who claimed the Hollywood star targeted him when he was 14.

A jury found that Anthony Rapp, who was seeking damages for “emotional anguish,” failed to prove that the two-time Oscar winner had “touched a sexual or intimate body part,” leading Judge Lewis Kaplan to dismiss the civil case.

After deliberating for about an hour “the jury found the defendant not liable,” according to the US district court for the Southern District of New York.

The 63-year-old star of “Usual Suspects” and “House of Cards” was seen leaving court soon after the verdict was announced, without addressing reporters.

His lawyer said in a statement that “Mr. Spacey is grateful to live in a country where the citizens have a right to trial by impartial jurors who make their decision based on evidence and not rumor or social media.”

“Their verdict was swift and decisive.”

One of the first stars to be caught up in the global #MeToo reckoning, Spacey has separately pleaded not guilty to charges of sexually assaulting three men in Britain between March 2005 and April 2013.

In 2019 charges against the actor of indecent assault and sexual assault were dropped in Massachusetts.

Rapp, who stars in the series “Star Trek: Discovery,” alleged he was assaulted by Spacey at a party in Manhattan in 1986, when he was 14 and Spacey 26.

In his lawsuit the actor, now 50, accused Spacey of coming into a bedroom where he was watching television, of picking him up, lifting him onto a bed and briefly laying down next to him.

According to a court document, Rapp claimed Spacey’s hand “grazed” his buttocks while doing so.

During the two-week trial, Rapp recounted that he “felt frozen” — until he managed to “wiggle his way” out.

Rapp agreed however there had been “no kissing, no undressing, no reaching under clothes, and no sexualized statements or innuendo,” during an incident that lasted no more than two minutes.

Since Rapp’s accusations first emerged in 2017, Spacey has disappeared from screens and theaters.

The “American Beauty” star took the stand repeatedly in New York to deny Rapp’s account of events, saying he had no recollection of attending the party in question with him.

At the time of Rapp’s accusations, Spacey came out publicly as gay for the first time, which he said led to charges he was “trying to change the subject, or trying to deflect.”

During cross-examination in New York, Spacey described a troubled family past, with a father he described as a “white supremacist” and a “neo-Nazi,” who disliked gay people and did not appreciate his son’s interest in the theater.

Spacey said Rapp’s accusations made him feel “shocked, frightened and confused” and that urged by his advisors he issued a public apology which he said he now regrets.

Quit trying to spin the news on crime, Mayor Eric Adams, and focus on calling out the roadblockers