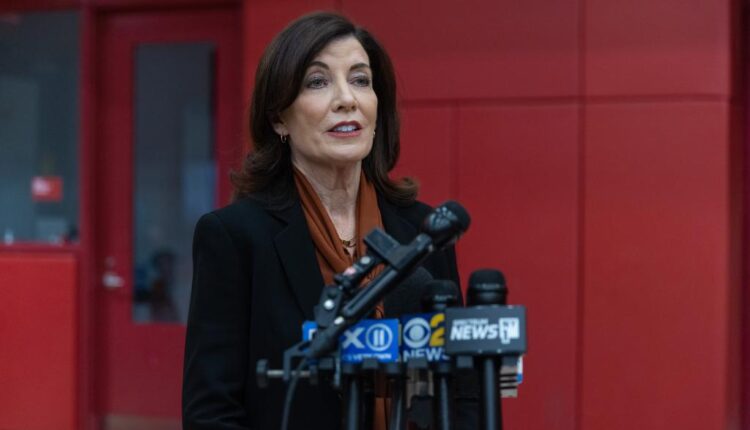 No matter the result of the New York race for governor, Kathy Hochul already has distinguished herself. She will be remembered for putting on a master class in how not to run a campaign.

Years from now, pols and pundits will accuse lackluster incumbents who adopt a Rose Garden strategy of “pulling a Hochul.” Any candidate who hides behind ceremonial events and lets a hardworking challenger set the agenda will be guilty of a “Hochulistic” mistake.

If that were all, it would be odd enough. But the accidental governor lately added a new layer of strangeness to her already-bizarre campaign by denying that crime is as bad as challenger Rep. Lee Zeldin claims.

Speaking of her opponent and other Republicans who emphasize the nation’s rising violence and disorder, Hochul told Al Sharpton, “These are master manipulators. They have this conspiracy going all across America to convince people in Democratic states that they’re not as safe.”

She obviously intended to insult Zeldin, but saying crime is overrated is an insult to voters, too, because it tells them their eyes and ears are lying to them.

It also rubs salt in the wounds of crime victims, of whom there are legions, and it taunts the grief of those who had loved ones shot, knifed or pushed in front of ­subway trains.

Other than that, it’s brilliant!

Future candidates who make the same mistake will be mocked as adherents to “Hochulism,” a cult whose members believe they can get away with denying reality.

In hindsight, it’s obvious that Hochul’s original mistake was in taking her election for granted. She and her handlers foolishly believed that, in a year where change is what everybody wants, New York’s heavily Democratic electorate would, after ridding themselves of the disgraced Andrew Cuomo, embrace anybody running on the D-party line.

The one concession she made to her shaky stature was to focus first on fundraising in the hopes of scaring off challengers, especially in the primary. No sooner did she take the oath than she was speed-dialing Cuomo donors, racking up a total that will surpass $50 million.

But even that success created a problem because she was sloppy about taking enormous amounts from people who have business with the state. Her willingness to shell out more than $600 million of taxpayer cash for COVID tests from a company whose owners donated some $300,000 to her was bad enough. Bad turned to worse when it turned out California got the same tests from the same company for about half the price.

Her extreme generosity with the public purse was also on display when she surprised even fellow Dems by secretly committing some $600 million of state money to a new Buffalo Bills stadium. She defended herself with the tired claim the team threatened to move, an owner ploy that is as honest as a three-card monte game in Times Square.

So what would a full Hochul term look like?

It’s impossible to be certain because she has been reluctant to lay out an agenda or even make many specific promises. But her record and what little she has revealed are unsettling.

Take the crime issue, where she has been a muddle of contradictions.

With the race considered a toss-up, in a recent TV ad she got some religion on Public Enemy No. 1 by promising to keep New Yorkers safe. But it’s hard to take the generalized commitment seriously when in the next breath she tells Sharpton crime is not really as bad as Zeldin claims. Which is it?

There is also the question of how deep her commitment is and which crimes she is talking about. She rightly cites double-digit decreases of murder in the city and around the state as progress, but doesn’t mention there is an even larger increase in serious crimes overall.

For example, in the city, car theft, robbery, rape, burglary and assault are on the rise by anywhere from 11% to 38% over last year, according to NYPD stats.

And even that doesn’t begin to address the issue of raving vagrants and many of the quality-of-life crimes that scare and infuriate people but don’t make it to the police blotter. Farebeating on MTA trains and buses is costing $500 million a year, yet Hochul, who controls the board, hasn’t shown much interest except to support a plan to make up for the shortfalls with an expensive congestion tax on drivers that would take effect next year. Zeldin vows to stop it.

Thus, there’s no reason to believe Hochul would do anything that would significantly improve public safety or lower the cost of living in New York. Once conservative, she has become a tax hiker and was quickly beaten into submission by the far lefties running the Legislature over the lenient bail laws.

Overall, the lack of specifics about crime, education and pretty much everything else leaves the impression she accepts the status quo as the best she can do and believes it’s good enough.

One result is that you don’t hear her berating judges or prosecutors for recycling career criminals back into society, nor does she call for broken windows policing as a way of cracking down on the epidemic of shoplifting and other nonviolent crimes.

In short, four more years of Hochul will likely mean four more years of decline in public safety along with increases in taxes. The cost of living will soar while the quality of life will drop, hallmarks of virtually every state where Democrats hold all power.

It’s such a grim picture that you have to wonder why Hochul wants the job. Then again, given her awful campaign, maybe she’s trying to signal she doesn’t really want it after all.

That would explain everything.

From the AP: “BBC reporter Marianna Spring created five fake Americans and opened social media accounts for them, part of an attempt to illustrate how disinformation spreads on sites like Facebook, Twitter and TikTok despite efforts to stop it, and how that impacts American politics.

But she’s from the media, so surely you can trust her, right?

Reader Steve Marcinak imagines “Seinfeld” in today’s city. He writes: “Elaine and Jerry get robbed and beaten at gunpoint in the diner, George gets randomly assaulted on the street and Kramer and Uncle Leo get pushed onto the subway tracks.

“The show ends with, ‘Tune in next week for more of the same because the perps were immediately released!’”

Award for pro-mask, pro-lockdown?! NYC teacher has a lot to learn