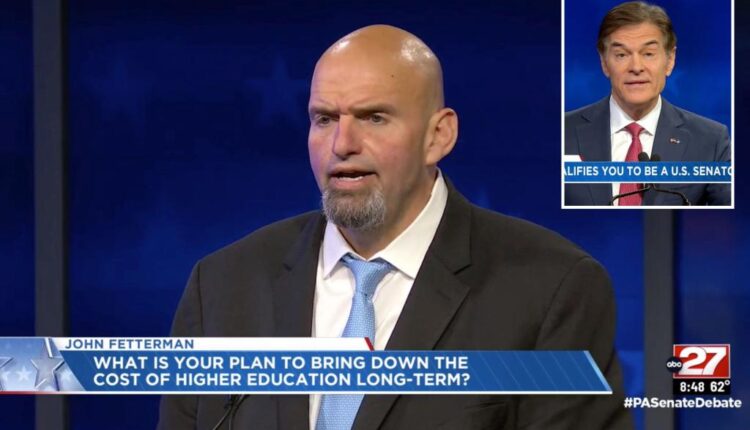 Eleven years ago, Texas Gov. Rick Perry destroyed his bid for the presidency when he said in a debate that he had three examples of something and then could only remember two.

That’s all it took — and rightly so. Debates afford voters a rare chance to see politicians under pressure having to think on their feet and respond to unexpected events.

I’ve never seen anything like the Pennsylvania Senate debate between John Fetterman and Mehmet Oz on Tuesday night, and I hope never to have to see anything like it ever again. It was horrible. I didn’t think I would ever experience a moment as painful in the midst of a political campaign as the Perry moment, but that was like watching Pavarotti sing “Nessun Dorma” compared to this.

The stroke that Fetterman himself said “knocked” him down at the debate’s outset has impaired him. Full stop. Don’t believe anyone who even tries to tell you different, and you should probably not trust any such person to tell you whether you need an umbrella because you don’t know whether it’s raining.

Seeing Fetterman struggle to answer simple questions and form simple sentences was nothing less than an agony. There’s no sense even in trying to characterize how he did in expressing himself on issues, or how Mehmet Oz did talking about matters ranging from abortion to fracking to Social Security.

Only one thing mattered, and that was watching Fetterman try to make a showing of himself despite his painful impairment. I don’t want to quote what he said or make specific note of his speech patterns or answers because it would be unnecessarily cruel.

Could Fetterman improve? Yes. Will he improve? We do not know. During the debate he refused to say he would release actual medical records rather than a clearly ginned-up letter from a doctor who is one of his donors.

What this debate made entirely clear is this: It is an act of personal, political, and ideological malpractice that Fetterman is still contesting for the Senate.

A month ago Fetterman could have dropped out and the Pennsylvania Democratic party could have put up a different candidate for his office — like Rep. Conor Lamb, who lost to Fetterman in the primary. It’s an act of political and ideological malpractice because he and his team have left Democratic voters with no option other than to close their eyes to what they saw and vote for someone who should not be in the Senate — or to vote for his rival. Or not to vote at all.

It’s an act of personal malpractice on the part of those who encouraged him to continue because this singularly upsetting performance is not the way any person on this earth — and particularly not someone who suffered a calamitous brain shock — should become famous or notorious or be remembered.