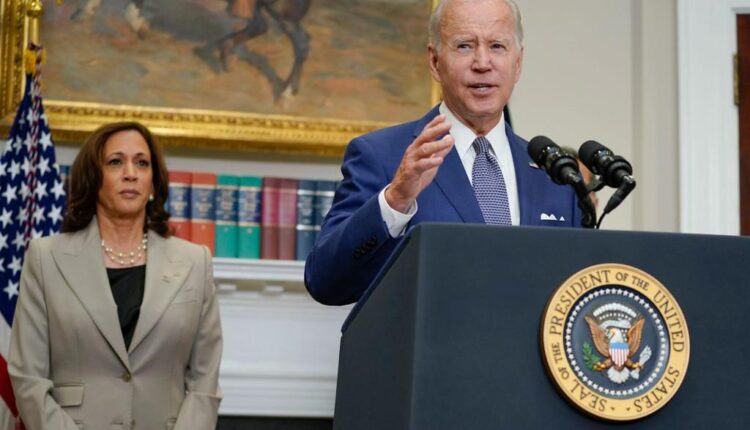 With apologies to an old television comedy, the week that was in America was no laughing matter.

On Wednesday, President Biden asked a crowd whether a dead lawmaker, Indiana Republican Jackie Walorski, was in the audience.

“Jackie, are you here? Where’s Jackie? I didn’t think she was — she wasn’t going to be here,” Biden said.

Walorski and two aides died in an August car crash. At the time, the White House issued a condolence statement in the president’s name.

After touring the demilitarized zone that separates North and South Korea, the vice president forgot whose side we’re on.

“The United States shares a very important relationship, which is an alliance with the Republic of North Korea,” Harris said. “It is an alliance that is strong and enduring.”

Whatever her excuse, if past is prelude, some poor staffer will be sent packing under the ruse that the veep wasn’t properly briefed!

Meanwhile, North Korea marked her visit with a spree of weapon tests, firing ballistic missiles four times in a week.

That kind of response helped to cut short mockery over the White House’s Dumb & Dumber act, and Friday brought an even bigger reminder there is nothing funny about Vladimir Putin. Although his threats are growing almost as fast as his army’s losses in Ukraine, he got the world’s attention by declaring that Russia annexed four Ukrainian regions and would use nuclear weapons to defend them.

In a speech that twisted history to make Russia a victim, the czar-wanna-be called America the “enemy,” claimed it was possessed by “Satanism” and, in the most ominous passage, warned: “The United States is the only country in the world that has used nuclear weapons twice, destroying the cities of Hiroshima and Nagasaki in Japan. And they created a precedent.”

In response, Secretary of State Tony Blinken decried the “loose” nuke talk, but added: “We are looking very carefully to see if Russia is actually doing anything that suggests that they are contemplating the use of nuclear weapons. To date, we’ve not seen them take these actions.”

The world is almost always a dangerous place, but the boldness of our adversaries is uncommon and unnerving. They saw Biden’s cut-and-run act in Afghanistan, and having taken his measure, are making their moves.

China, which is propping up Putin with coal and oil purchases as part of a troubling new alliance, is poking Japan and menacing Taiwan in what looks like rehearsal for an invasion.
Biden’s reaction has been strange in that he vows America would put boots on the ground to help defend the island. In fact, he has promised a United States combat role four times, and four times aides have walked back his comments, saying the policy remains only that we would sell Taiwan military equipment to defend itself.

Strategic ambiguity is one thing, but utter confusion about whether the commander in chief has all his marbles and is still in charge is quite another.

Meanwhile, Iran’s regime, beset at home by growing demonstrations over women’s rights, took a break from killing its own citizens to fire ballistic missiles into Iraq’s Kurdistan, killing a number of civilians, including one unidentified American.

Recall that it was after a similar attack nearly three years ago that then-President Trump droned Qassem Soleimani, the mastermind of Iran’s terror networks.

This time, the very-busy Blinken merely rolled out the condemnation machine, deplored the loss of life and criticized Iran for “threatening additional attacks against Iraq.”

Yet at no point has the White House suggested that such attacks on our allies, and Iran’s continuing threats against Israel, would cause Biden to scuttle his offer of a new nuke deal. Like climate change, an Iran pact has reached totem status on the left.

Thankfully, a group of bipartisan senators say the mullahs’ repression at home is reason enough to walk away from the talks which, incredibly, Russia is still moderating.

New Jersey Democrat Robert Menendez, chair of the Foreign Relations Committee, told Iran International, a British-based outlet, that the US should get ready for the fall of the regime, noting it was caught off guard in 2009 by the Green Movement protests.

Republican Mitt Romney, also citing the protests, told the same outlet that “Iran is a bad actor and providing more resources to them and relieving sanctions would be a big mistake.”

All this trouble abroad is a bookend to Biden’s troubles at home. Here is how The Wall Street Journal began its market report after trading ended for the week: “Stocks closed lower Friday, ending the third quarter on a downbeat note as investors fretted about the path ahead for earnings, interest rates and global economic growth. All three indexes are down at least 21% for the year.”

Yikes — downbeat, fretting and lower. If ever a stock market report also reflected a national mood, there it is.

What matters to voters

A crucial run-up to elections is the battle to set the terms of the debate. Poll after poll shows that inflation, the economy, crime and immigration are at the top of most voters’ lists.

This is bad news for Biden and his party because they have no answers for any of those problems, most of which they created or allowed to fester. And time is not on their side, with signs suggesting everything could get worse before Election Day.

In that case, their only hope is the shiny object theory of politics, which involves trying to distract voters’ attention from the core issues. And so at every level, Dems are campaigning on Donald Trump, Jan. 6, and abortion.

That might work in selected swing districts, but even with the help of Big Media and Big Tech, Dems won’t be able to hide the fact that at home and abroad, America faces a heap of trouble.

Some people have no shame.

As the Hurricane Ian death toll climbs in Florida, a group supporting the Democrat running against GOP Gov. Ron DeSantis is counting something else: fund-raising dollars.

“After we ran attack ads against Ron, Charlie Crist started closing in on his lead — but there’s a big problem: So far, Ron’s raised more than 11 times what the official Democratic nominee has.”

I expect that, in a day or two, the same group will find a way to accuse DeSantis of injecting politics into recovery efforts.

Mayor or may not at Gracie

Reader William Hermance sees a silver lining in Mayor Adams’ fixation on the migrant influx. He writes: “Fortunately, Adams doesn’t finish anything he starts. Orchid Beach may never see a migrant and next spring the parking lot will be filled with abandoned and tattered tents.”