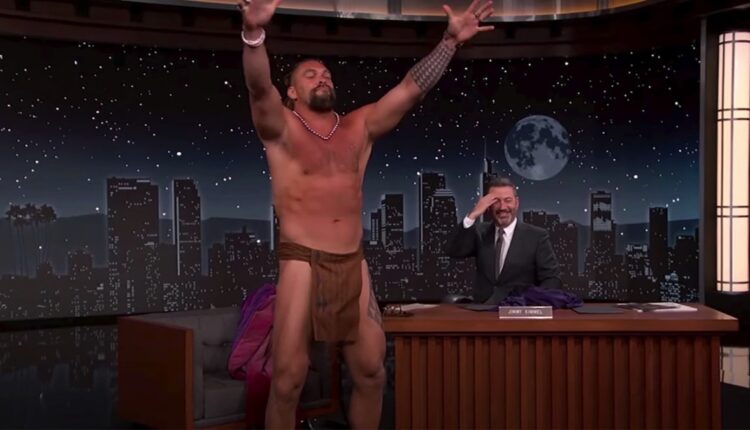 Jason Momoa gave fans what they were hoping for, and more, when he appeared on Jimmy Kimmel Live. First, he arrived in costume for his upcoming film based on the classic newspaper strip, Slumberland.

But later, he really gave fans what they want, while keeping it traditional Hawaiian. He also explained why he was wearing a traditional malo in that viral fishing photo that broke the internet.

The Aquaman star explained that he’s been wearing the garment while shooting Chief of War, an upcoming Apple TV+ limited series set in the 18th century about the unification and colonization of Hawaii.

“That’s what I wear every day,” Momoa explained. “I was just getting ready for the role and I like to get into character and so I was tanning my white ass.”

Momoa happily obliged Kimmel’s inquiries, but chose to show rather than tell when the comedian asked whether he was “wearing this under your clothes right now.”

“Of course,” Momoa replied, before standing up and fully disrobing to reveal the butt-baring outfit mere inches away from Kimmel’s face.

After giving the host quite the view (and even a little jiggle), he quickly put his clothes back on to carry on with the rest of the interview.

But Kimmel clearly needed a moment, joking, “Let me tell you, I never felt more like Danny DeVito than I do right now.”

Momoa, for one, explained that the malo is so comfortable that he far prefers it to his regular outfits.

“I actually don’t even like wearing clothes anymore,” he said. “I’m in it every day. I wear it all the time.”

Based on the cheers coming from the audience, there are clearly no complaints.